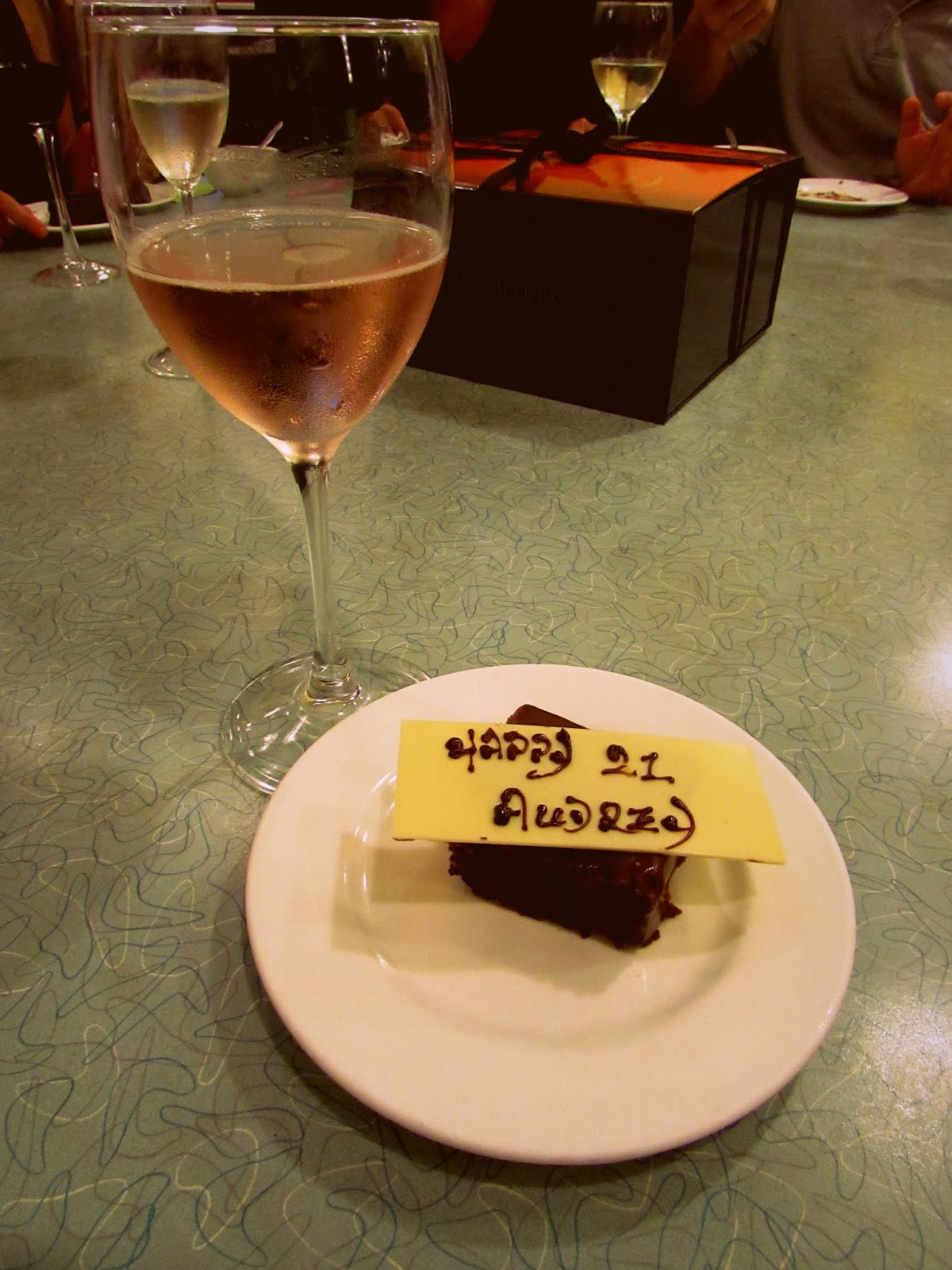 I'm much overdue on writing, and life has been an absolute whirlwind since I last wrote--from having my 21st birthday to traveling around Shanghai and Hangzhou for a week (a blog post in and of itself)! Now that I'm firmly back in Hong Kong, I am doing my best to get caught up on my endeavors here and also delve more deeply into my project. But I relish the chance to reminisce on how lovely the last few weeks were as I fill in the gaps on my blog...

Last year, working abroad in Guangzhou, China, was the first time I had a birthday away from home. It was a Tuesday, I went to my internship as per usual. While my coworkers were so nice to bring me a cake and sing me Happy Birthday, I remember feeling acutely sad to spend the day being far from family and friends. With the loneliness of last year's birthday in mind, I dreaded the coming of my 21st birthday here in Hong Kong--especially since while in the U.S., turning 21 carries special significance (whether that entails the ability to drink or the general coming-of-age sentiment) that it doesn't elsewhere. In fact, my 21st birthday ended up being the most wonderful and special birthday I have ever celebrated--in no small part due to the fact the celebrations didn't seem to end!

My week already had an incredible start--I hiked to a gorgeous remote beach on the south side of Hong Kong Island with a few friends. A few days later I watched the sunset from Hong Kong's "secret natural infinity pool," a dammed waterfall high in the mountains near Tai O, a fishing village on stilts in Lantau Island. In other words, I started the week already feeling pretty mellow--but things only got better from there.

In my erhu lesson the previous week, my teacher Nick had invited me to come watch the rehearsal of the Chinese instrument ensemble in which he performs. In my lesson during the week of my birthday, he changed his mind: "I think you could play in the rehearsal--you can try the easy pieces." He gave me a stack of scores, denoting the ones he thought were within my abilities, and the time and location of the rehearsal. I didn't have enough time to work through the music, but I figured I would nonetheless go and try my best to sightread, and at the least just observe their practice. As fate would have it, I got lost in pouring rain on the way to the rehearsal, and finally located the rehearsal room right before it began. I walked in and confronted a terrifying sight: a large ensemble of players already in position to start, jabbering away in Cantonese. Nick gestured at the spot next to him: "Come sit here!"
You have to be kidding me, I thought. The spot he pointed to was, in orchestral terms, the assistant concertmaster's seat--in front of all of the other players, reserved for the ensemble's second-in-command, and right under the conductor's nose. Confronting this veritable musician's nightmare, I squirmed into the seat and tried to not make eye contact with anyone as I sheepishly pulled out my erhu. I silently berated myself for not looking at any of the music beforehand*, but it was too late, the conductor had raised his baton and we were off.

*A side note about Chinese musical notation that I meant to make earlier: much of Chinese music is not notated using the Western music notation system of a five-line staff with note heads and key signatures. Instead, many pieces use a system of numbers that parallel the solfège system of movable do--in other words, in any given piece, the first note of the scale is indicated with a 1, the second scale degree is 2, and so on. Dots above the number indicate a higher octave and dots below indicate a lower octave. If a piece is in the "key of C," so to speak, 1 will be a C, 2 will be D, etc.; if a piece is in the "key of D" 1 will be D, 2 will be E, etc. There are bar lines and time signatures, but lines underneath the numerals indicate their rhythmic value. If you are confused, don't feel bad--so am I.

While I didn't sound particularly grand, and there were many places where I just couldn't keep up, I actually found that I was picking the music up quickly, and actually having a lot of fun. I had no idea what was going on (I know only enough Cantonese to determine what measure number we would start from) but I remembered how much I love the feeling of playing as part of a larger ensemble. In the past, that has always been an orchestra, and indeed, playing Chinese music in an orchestra-like setting felt bizarre, but I found that the nuances of playing in an ensemble (timing, coordination, balance) directly translated. After the rehearsal, Nick and the conductor came up to me. "Actually, we think you can play all of the erhu pieces in the performance. Also, we were thinking you could play a solo on violin, too." Anyways, talk about going from zero to sixty! I'm going to be leading a Cantonese opera piece, 帝女花, on violin, and then playing the Kriesler solo violin piece I previously posted. The performance is this Friday evening in honor of the Mid-Autumn Festival, and I have invited a bunch of friends, so the pressure is on!

(Here's a link to the Cantonese opera piece I am playing on violin!)

So this overwhelming but absolutely fun Chinese instrument ensemble rehearsal, and unexpected performance opportunity, was a huge birthday gift in and of itself. But that wasn't the end of the birthday celebrations! Over the course of the week I met up with friends from Wellesley, my friends from the Wall Street Journal, and my former music theory professor. Then, I was touched to hear from my good friend in Hong Kong, who wrote to me saying she wanted to host a birthday party for me. We invited many of the people in Hong Kong who have welcomed me and helped me with my project, including Alexis, the composer, my erhu teacher and my Chinese linguist friend, and over heaping platters of steaming delicious Cantonese-style food I told them how much their friendship and support meant to me. I also heard from my little sister, who had without my knowledge, solicited birthday video messages from my friends and family, and compiled a short movie of well-wishes (as well as many of them singing me Happy Birthday)! It was truly the best gift I have ever received--and looking back, on what I had expected to be a day of loneliness I felt tremendous love, support, and connection. I am sure that there will be days that are absolute personal lows in the months to come, but I can say confidently that my birthday was not one of them--in fact, it was one of the best moments in my life. 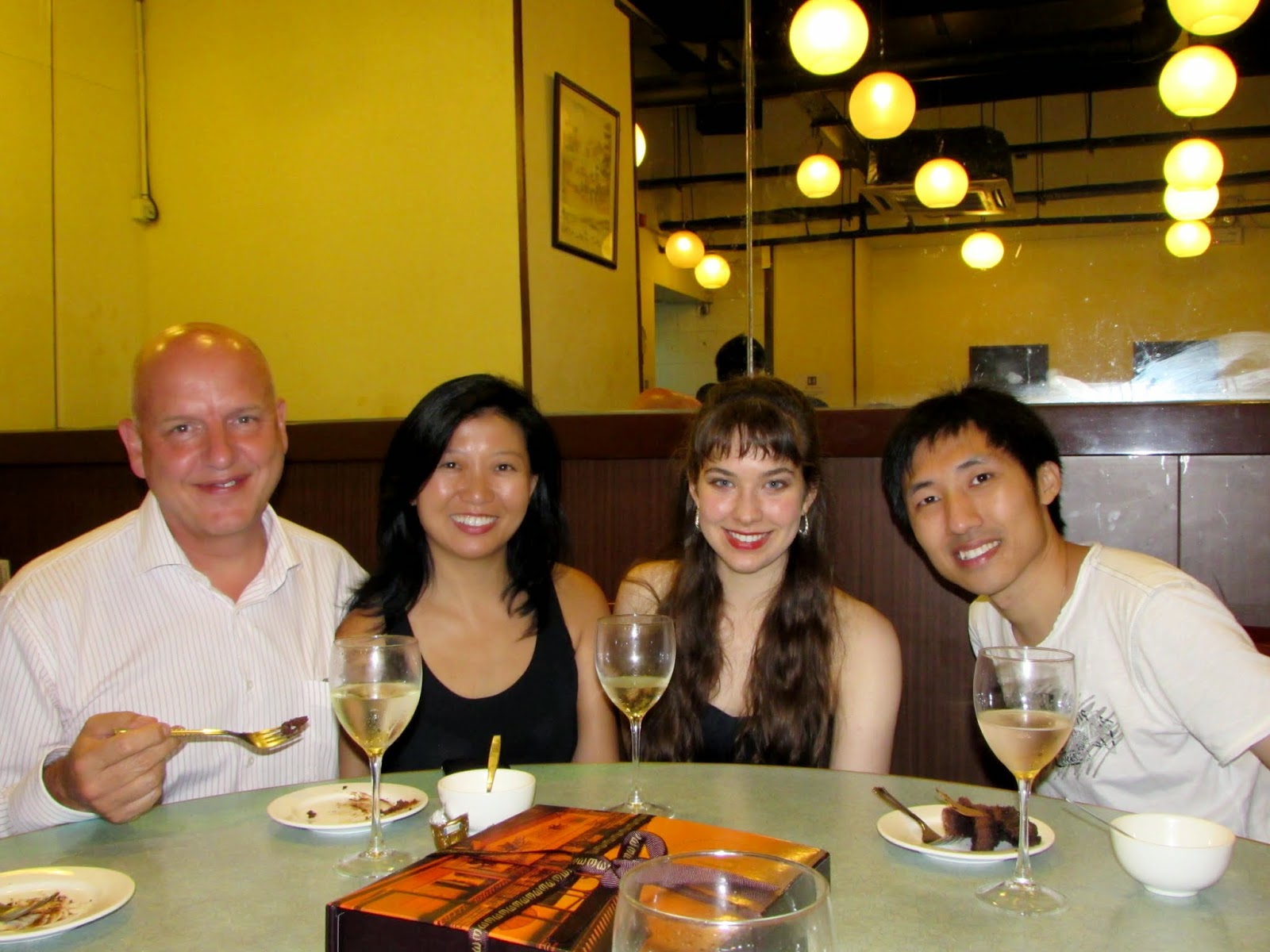 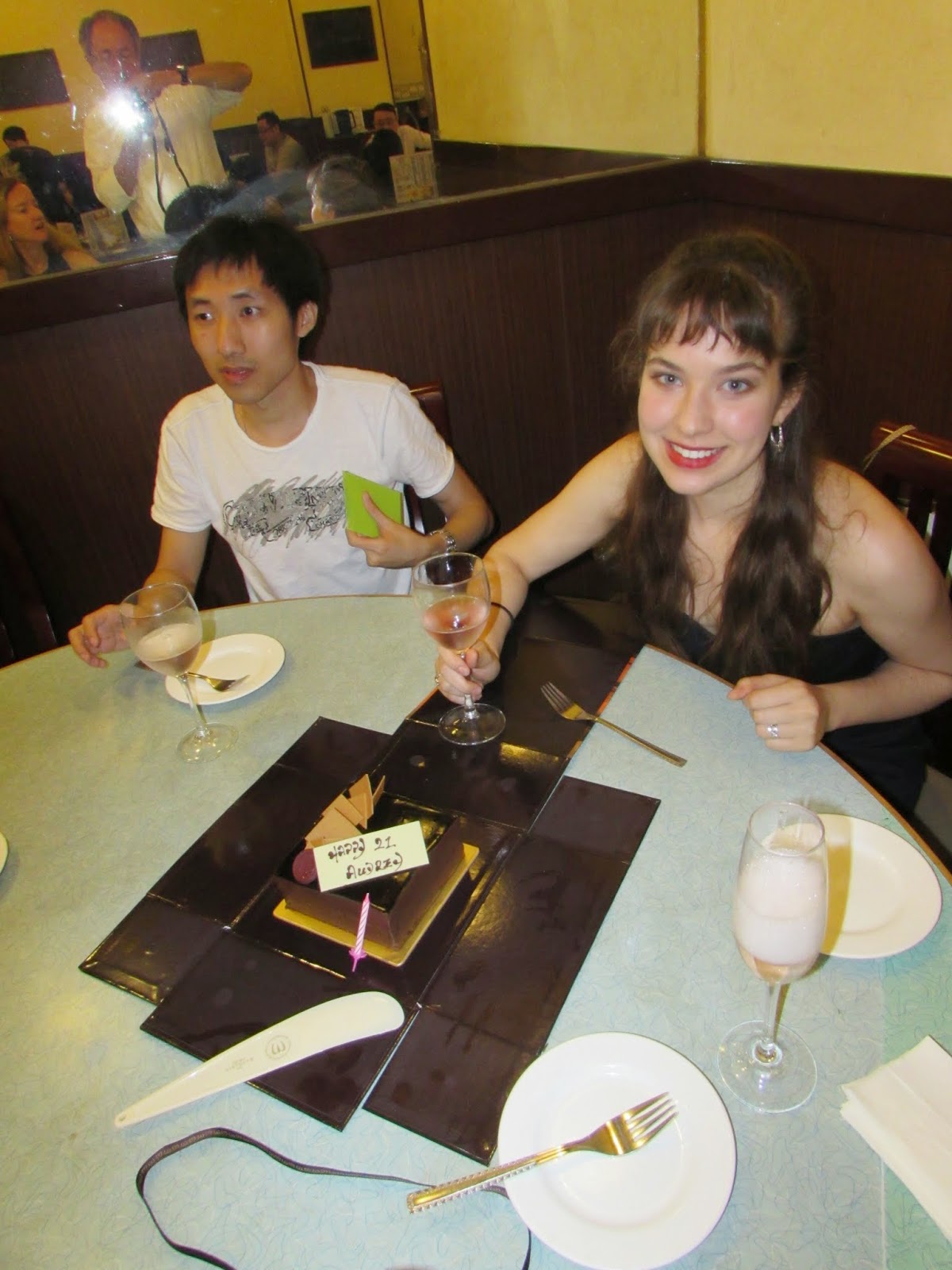 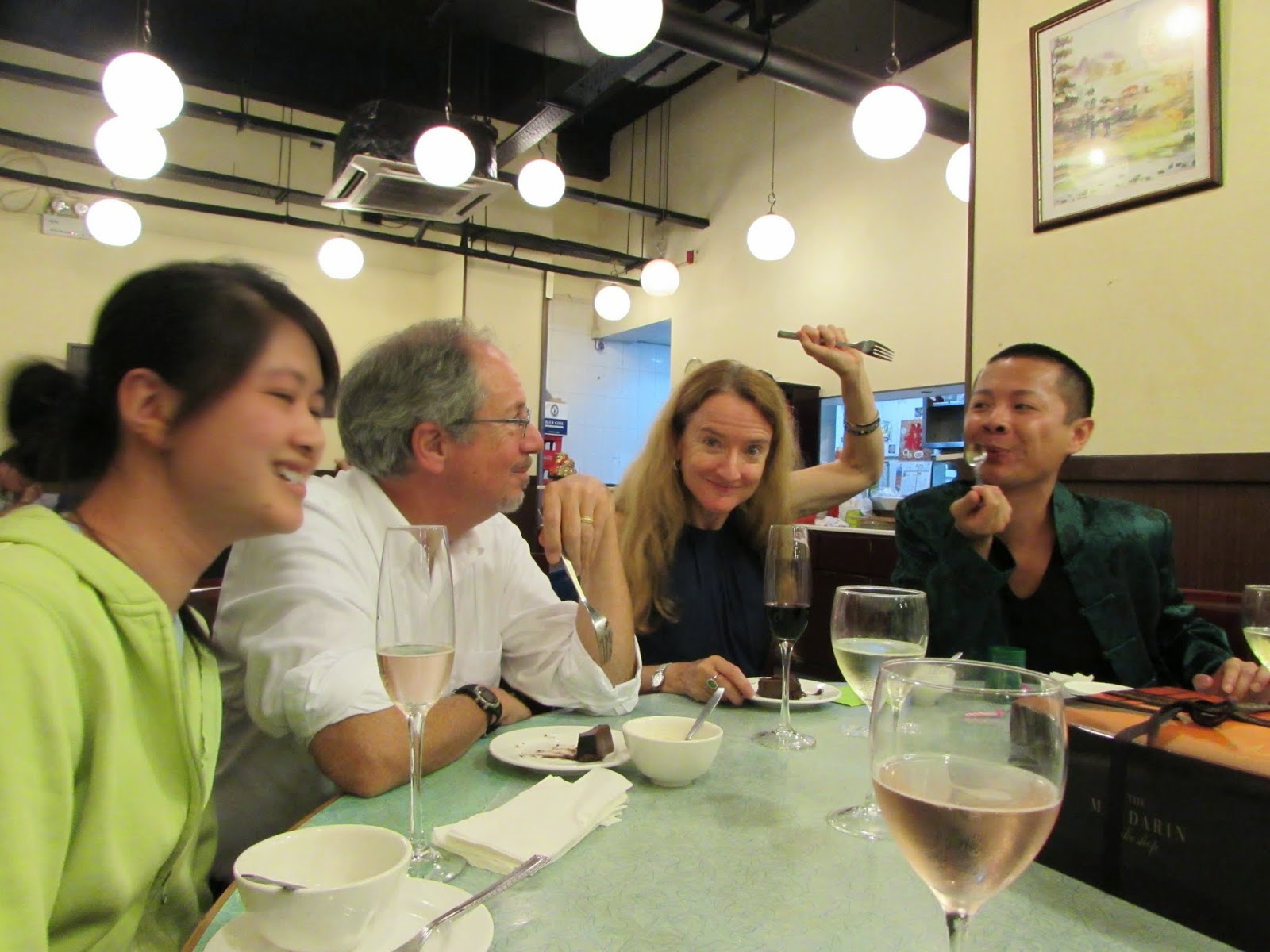 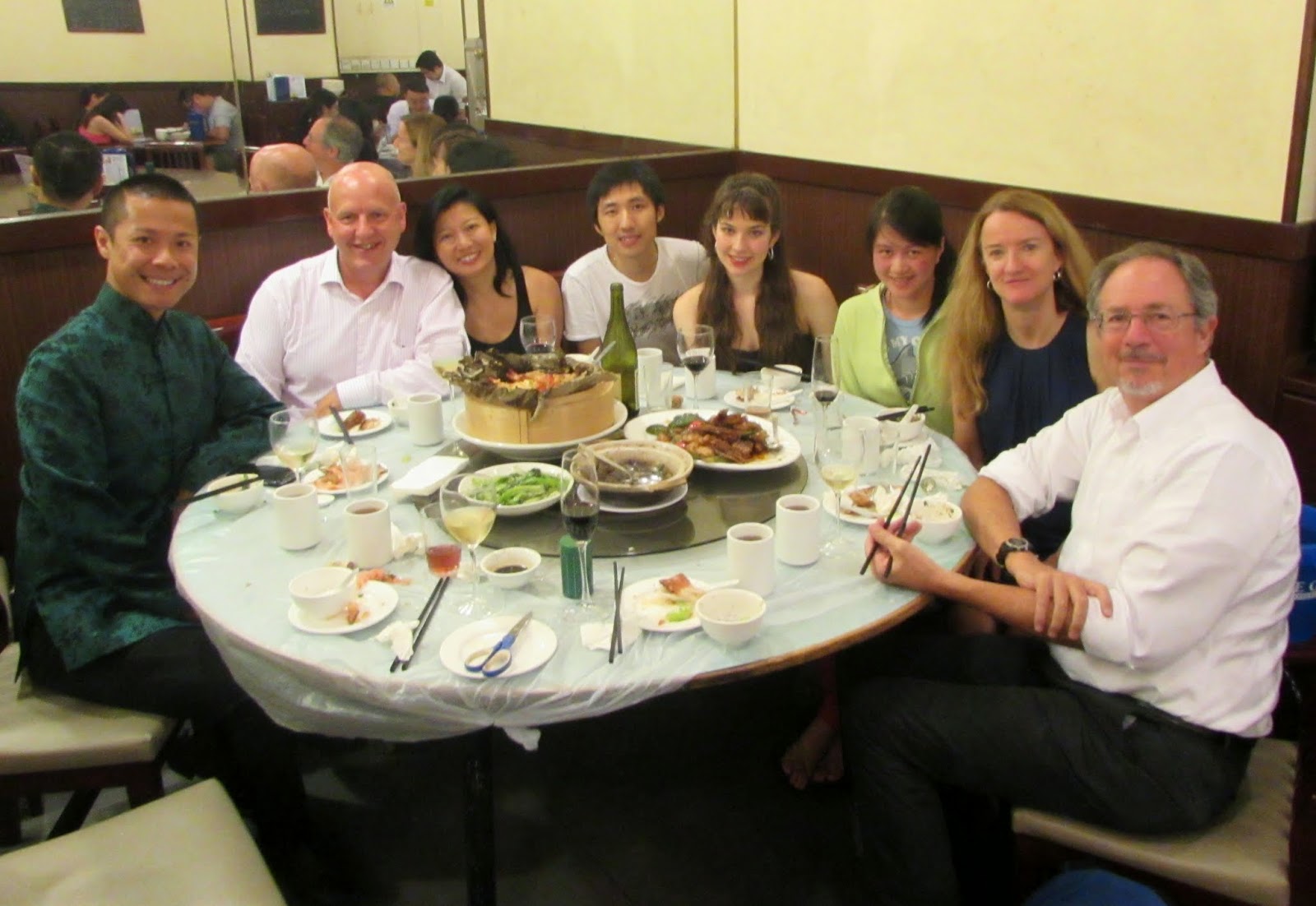