I'm just a little over one week into my year of international travel, and already I feel confident declaring that the one thing you can count on with this sort of large-scale, cross-continental endeavor is that the best-laid plans will crumble when you least expect them to. However, I can also wholeheartedly attest that opportunities present themselves in the most unlikely fashion as well, emerging from chance encounters that even with the most careful research and planning one could never hope to manufacture.

First, the crumbling best-laid plans: visa issues beyond my control continue to affect my itinerary for this upcoming year. I thought I was going to be interning in Hong Kong for ten weeks, and then just three, and now I am putting off my entire internship until next year. I'm also crossing my fingers that I am able to get a Chinese visa at all given my issues last year (see previous post)--if not, in addition to the ten weeks I planned to spend in Hong Kong, I will need to come up with a plan for the two months of my Watson year I intended to spend in western China. That said, I already rented an apartment in Hong Kong for this month in anticipation of the internship; in other words, last week I found myself in Hong Kong wondering what I was going to do with myself on a daily basis given that interning as planned wasn't a viable option. I also have been coming up with new potential yearlong itineraries that are extremely conditional on factors outside of control ("IF I get a Chinese visa, THEN I'll travel around Yunnan and end up in western China, but IF I have a good gig going in Hong Kong, THEN maybe I should first stay here longer, and IF my Chinese visa falls through, THEN...what? Azerbaijan? Indonesia? Burma for kicks?") But even in the face of all of this uncertainty, I have been having a great time in Hong Kong--not just in the sense that I have been seeing the sights and eating the eats, but also in that I feel good about the connections I have made with people and foundation I have laid for my project.

Disclaimer: I have no idea what I'll be doing in three weeks time, but all things considered I'm feeling pretty good about it.

So onto the positives, and probably the reasons why I have adopted this nonchalant bravado about my transient lifestyle.

Upon realizing that conducting my internship as planned was no longer a feasible option, I freaked out about finding a sense of purpose in Hong Kong. Luckily, Hong Kong is a city of over 7 million people with an efficient public transportation system, so it's a pretty happening place in which to suddenly find oneself with nothing to do. A couple of my days so far have read like really romantic dates--except that it's just me. On my first day of funemployment, I took myself to a hip Thai joint ("Table for one, please..."), and then decided that I would walk uphill as far as I could. I live at the base of a mountain, so I figured that if I got lost, I could just roll a round stone and follow it down the slope like a fairytale character. My upwards walk led me to the Hong Kong Botanical and Zoological Gardens, where I joined a host of mother/toddler or domestic helper/toddler duos ogling the flamingoes and orangutans. After admiring the colorful birds and orchids for some time, I continued walking up the steep slopes, until I found myself at a tram stop that was ordinary in most every way--except that the station was at a 45 degree angle, and the tracks ran straight up the side of the mountain. I had found the Victoria Peak tram, and with the push of a button I requested the next tram stop to let me on. [Pro-tip: getting on midway up the mountain is the way to do the Victoria Peak tram. The terminals at the top and bottom of the mountain were swarmed with crowds--the wait in the line was easily 45 minutes (and this was a weekday)!] Slowly, the cable in the center of the tracks started moving, and within a few minutes I saw a tram huffing and puffing its way up the incline. (You could all but hear the engine muttering, "I think I can, I think I can...") The packed car wheezed to a stop and I stepped in, immediately thrown backwards by the steep angle. As I pictured the cable snapping, the tram in fact chugged on matter-of-factly, and I forced myself to consider the panoramic views of the city rather than imminent doom. 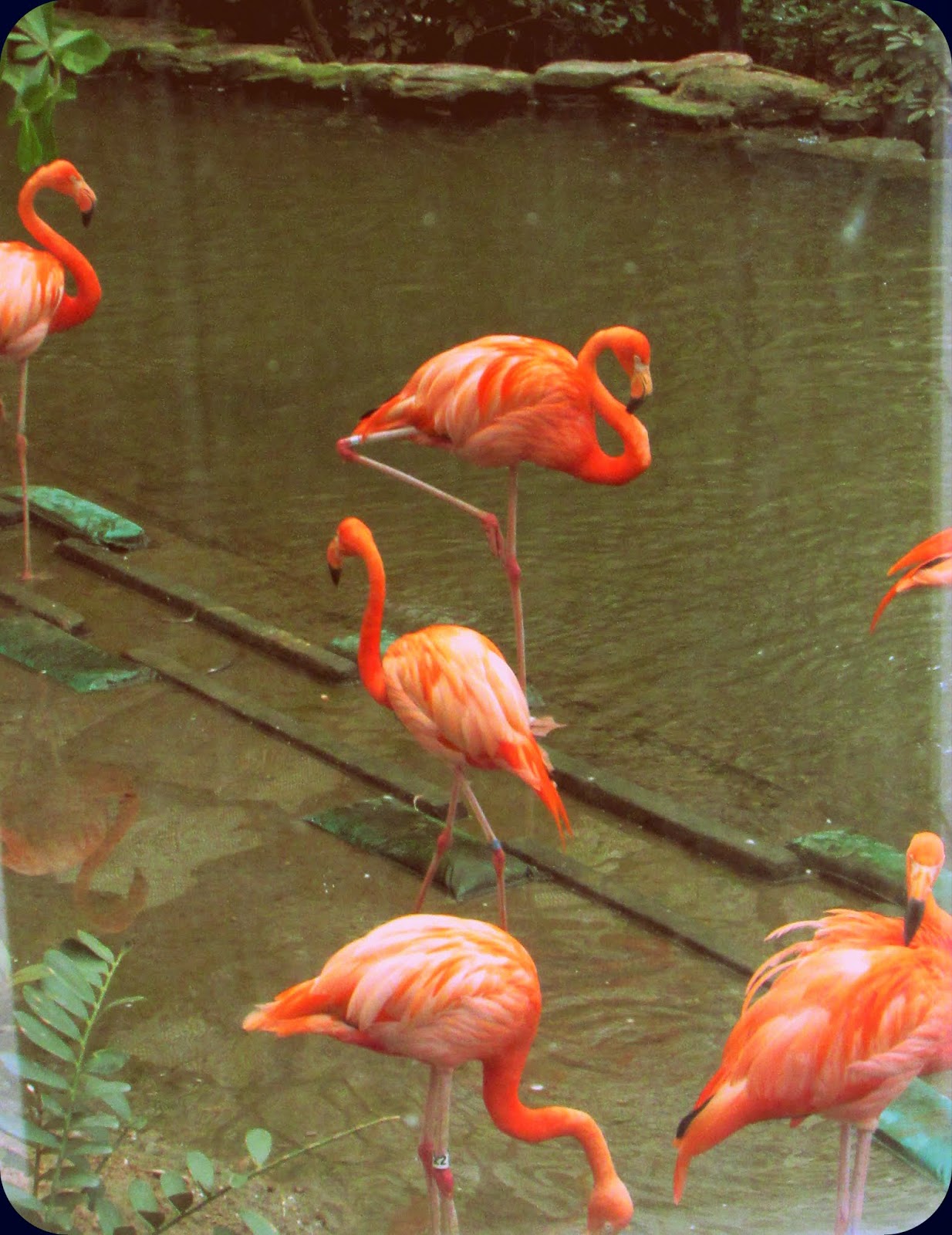 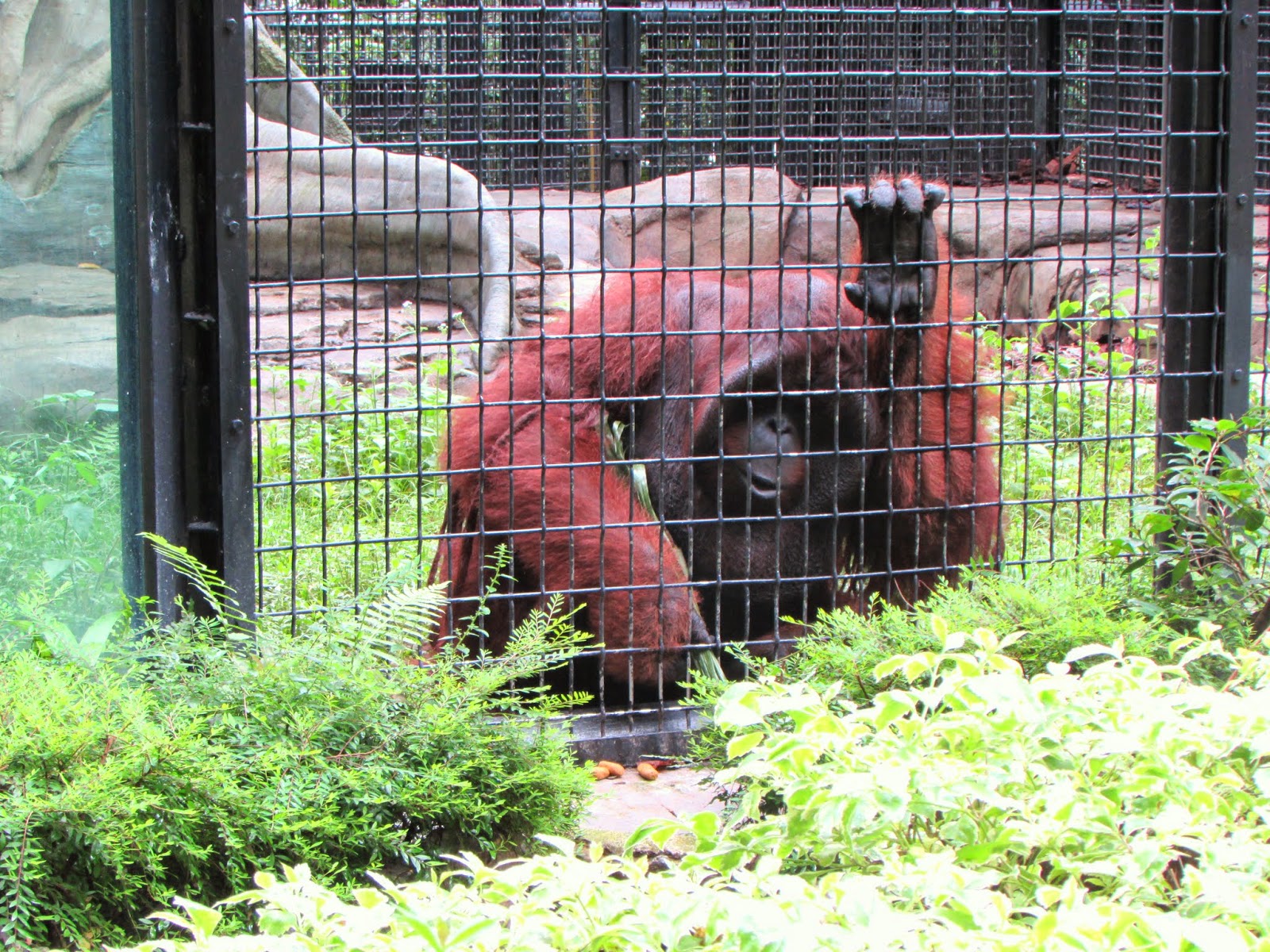 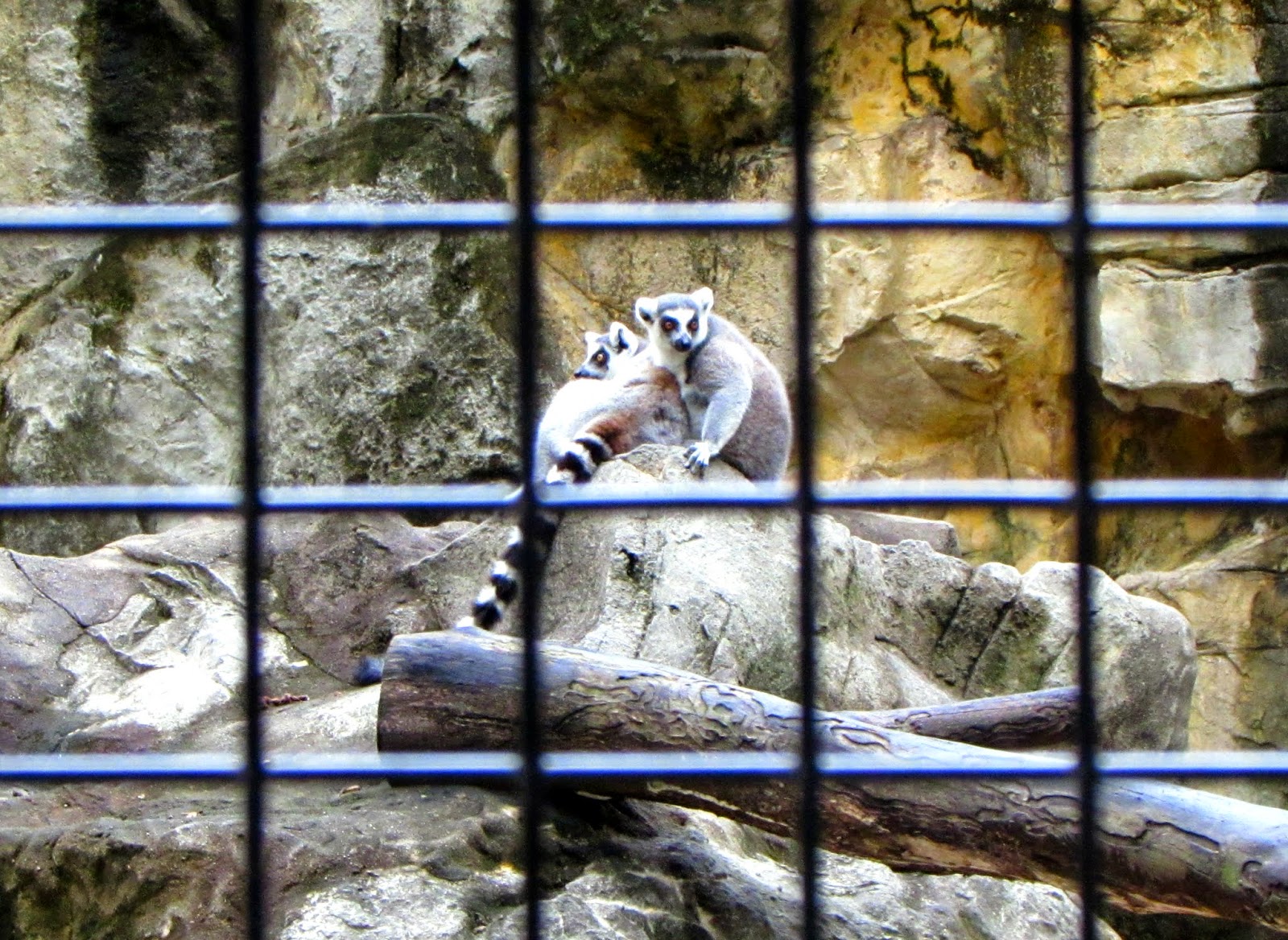 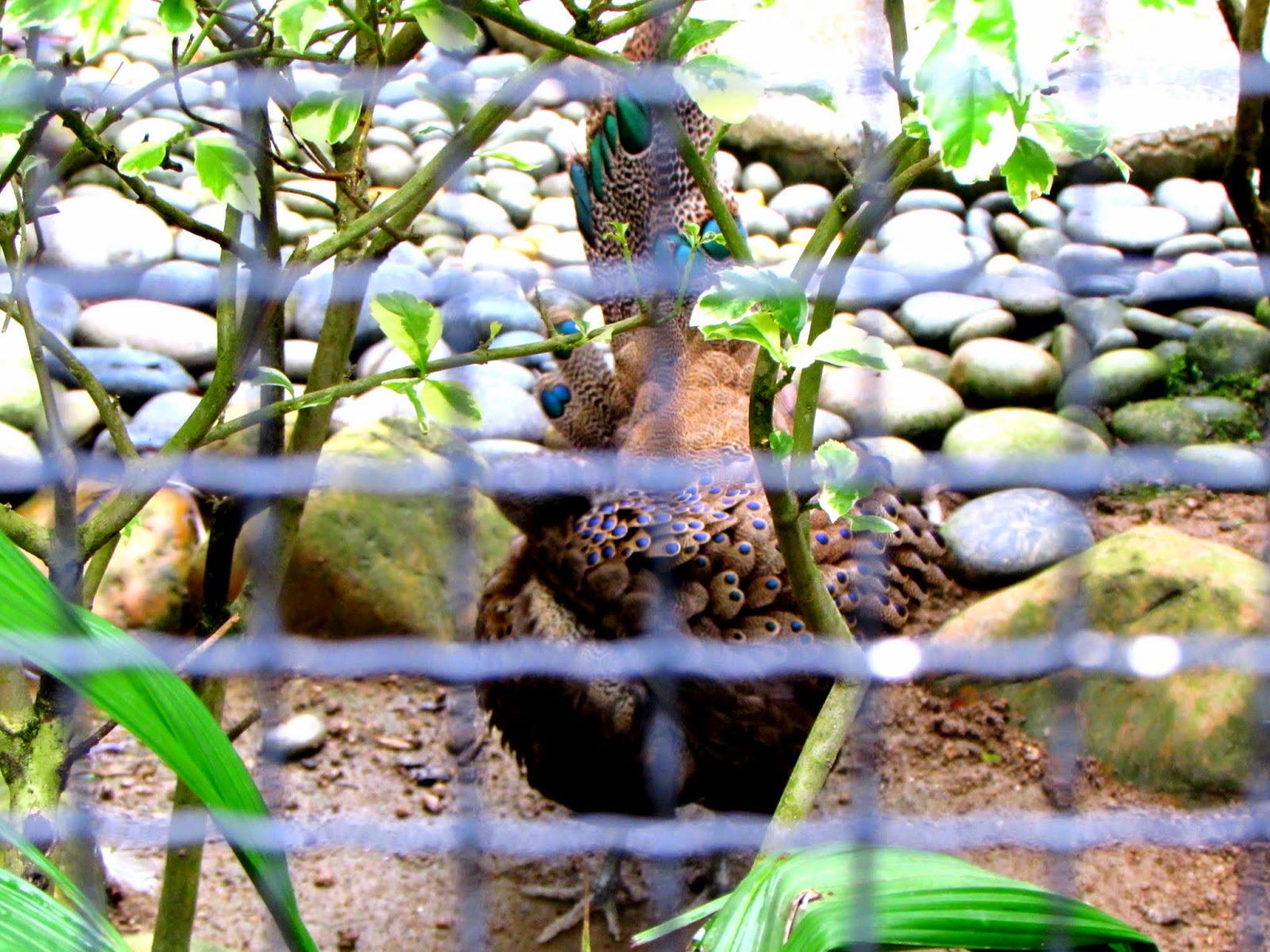 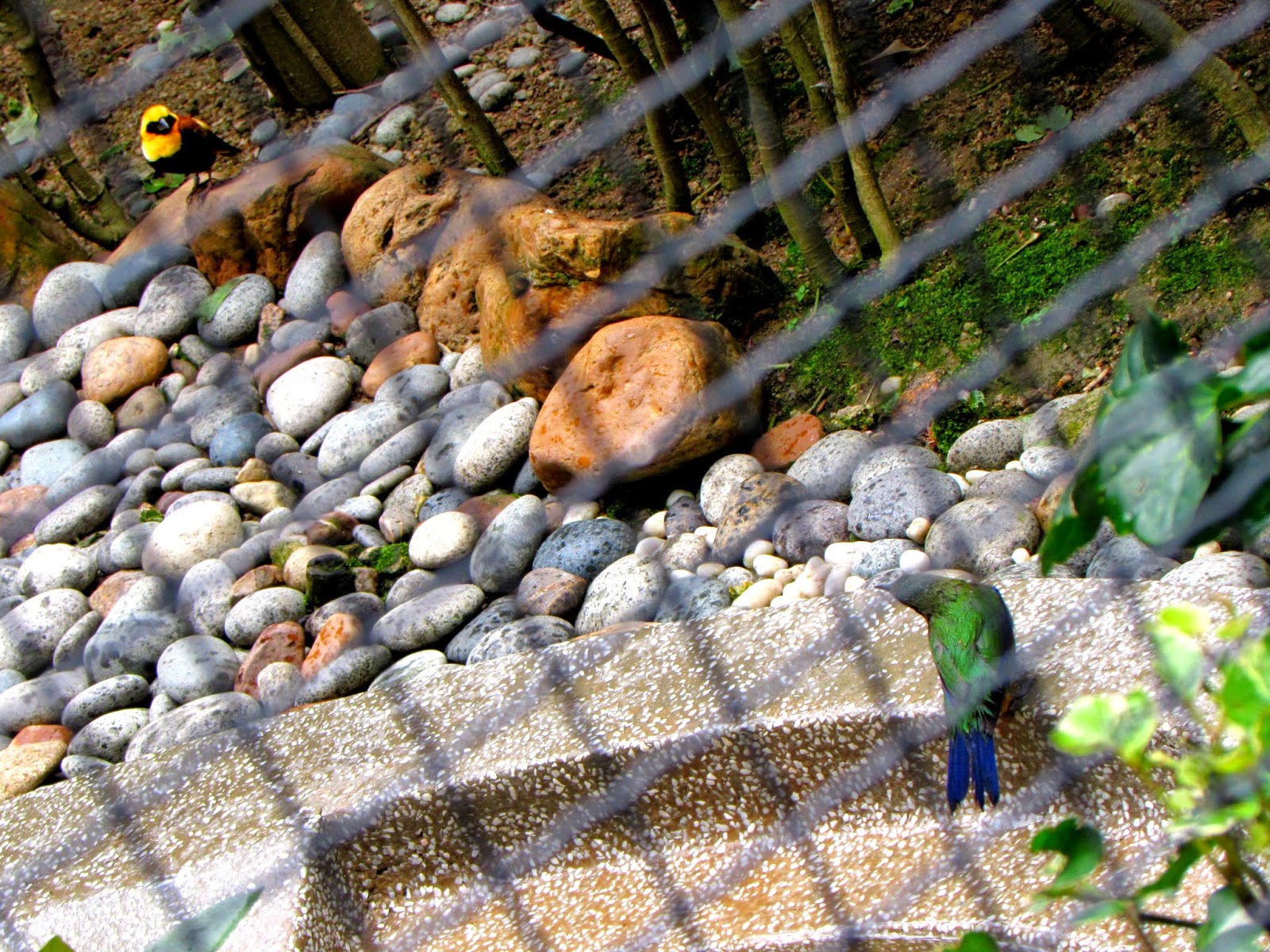 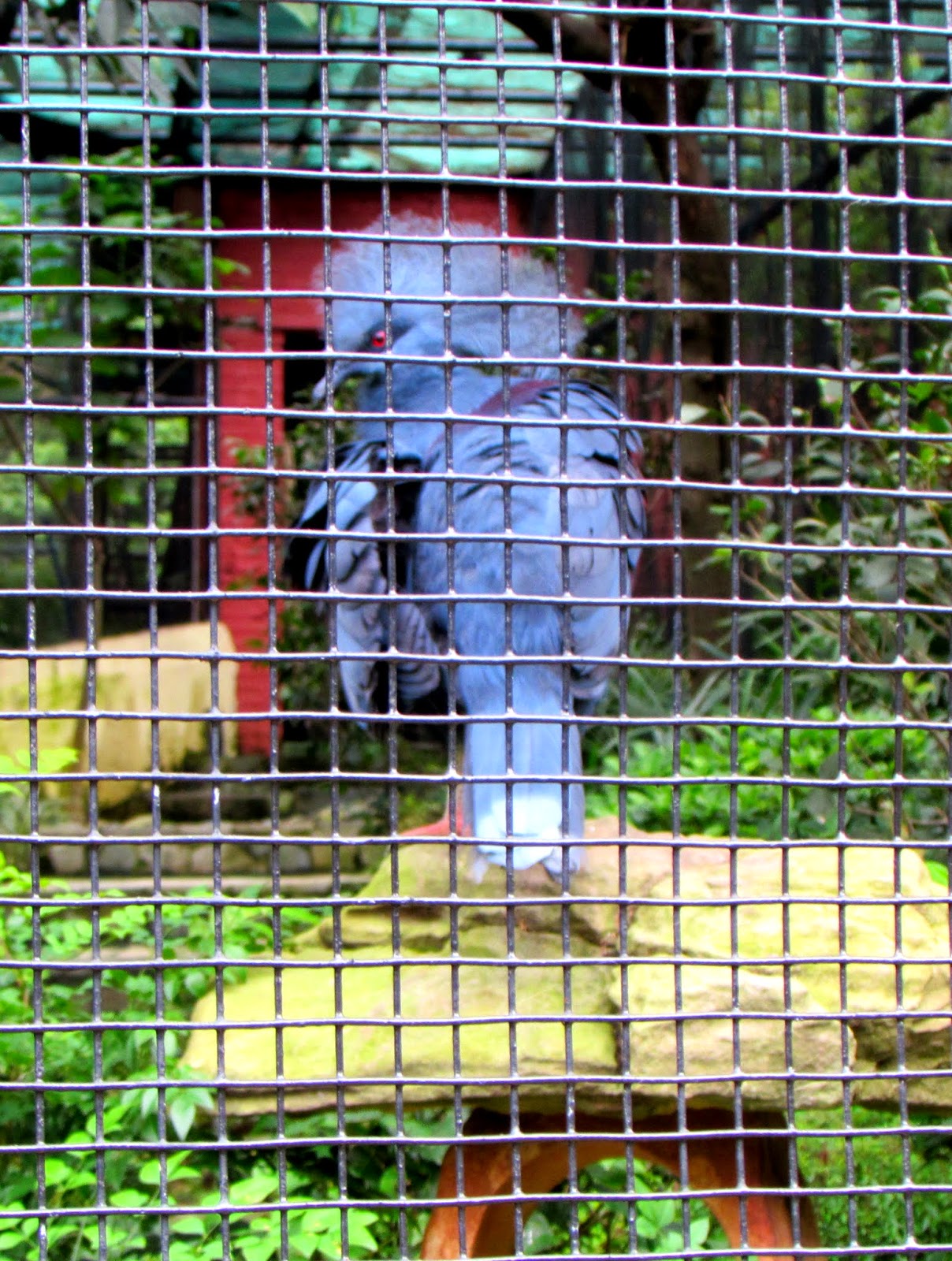 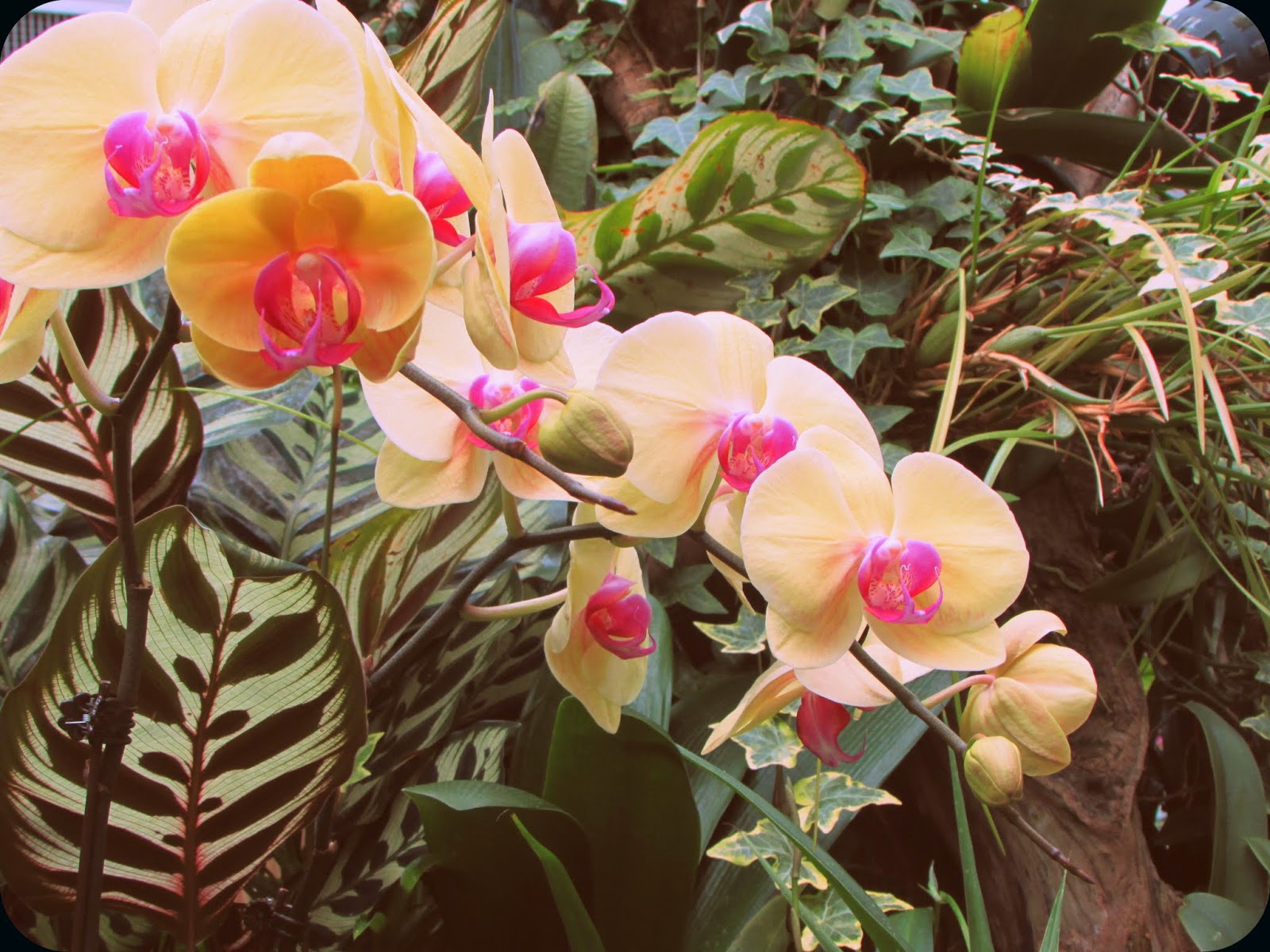 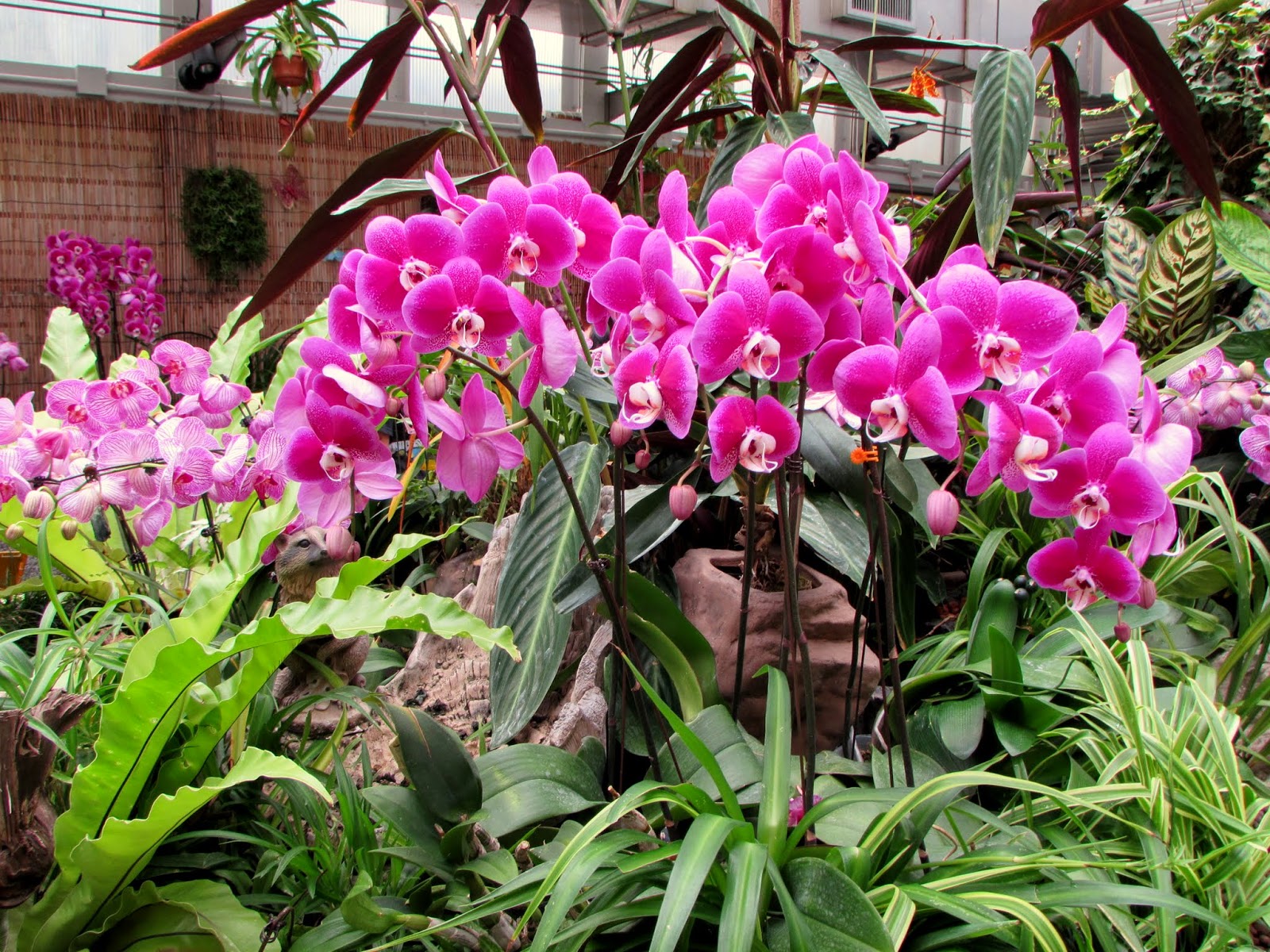 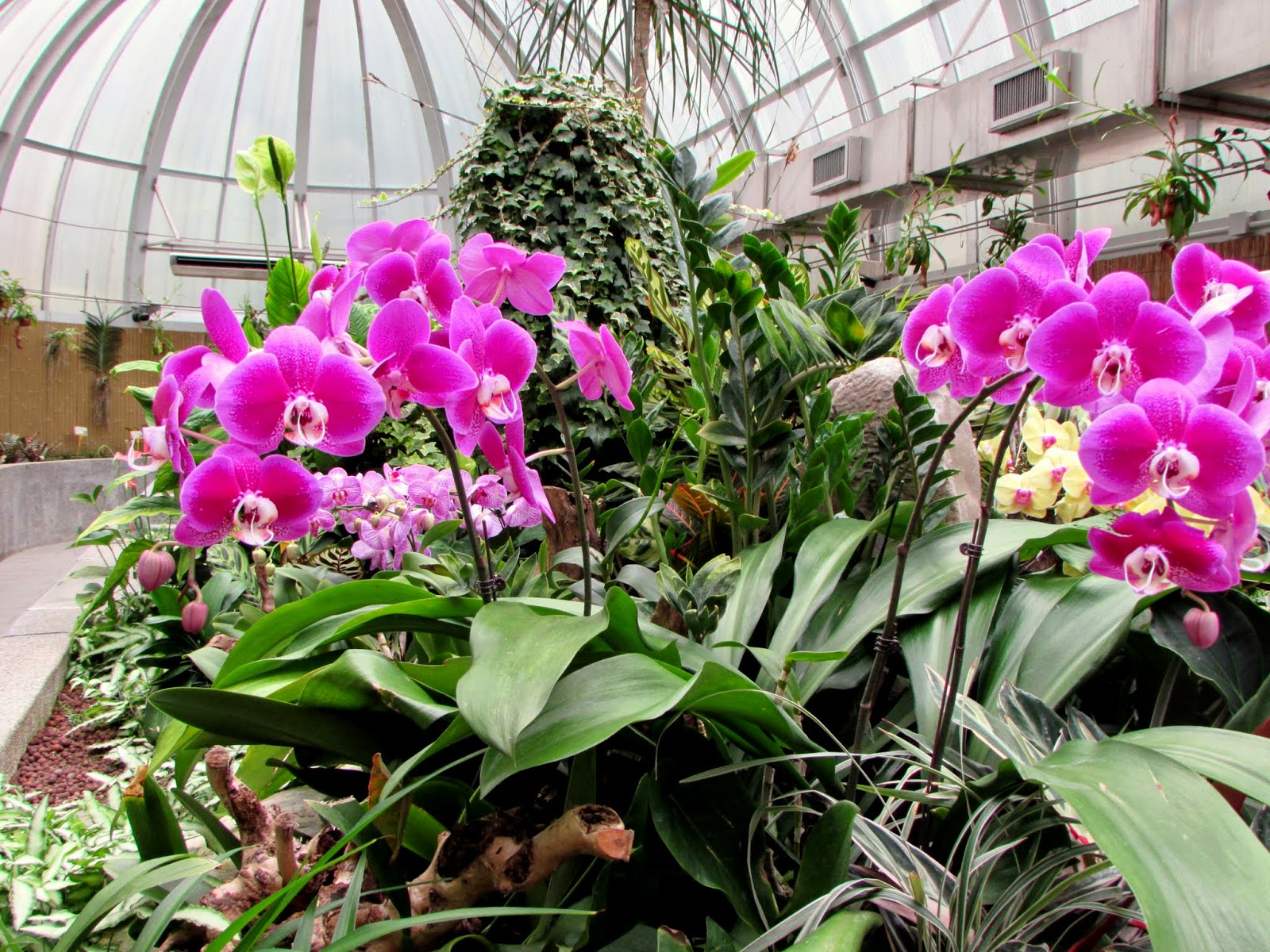 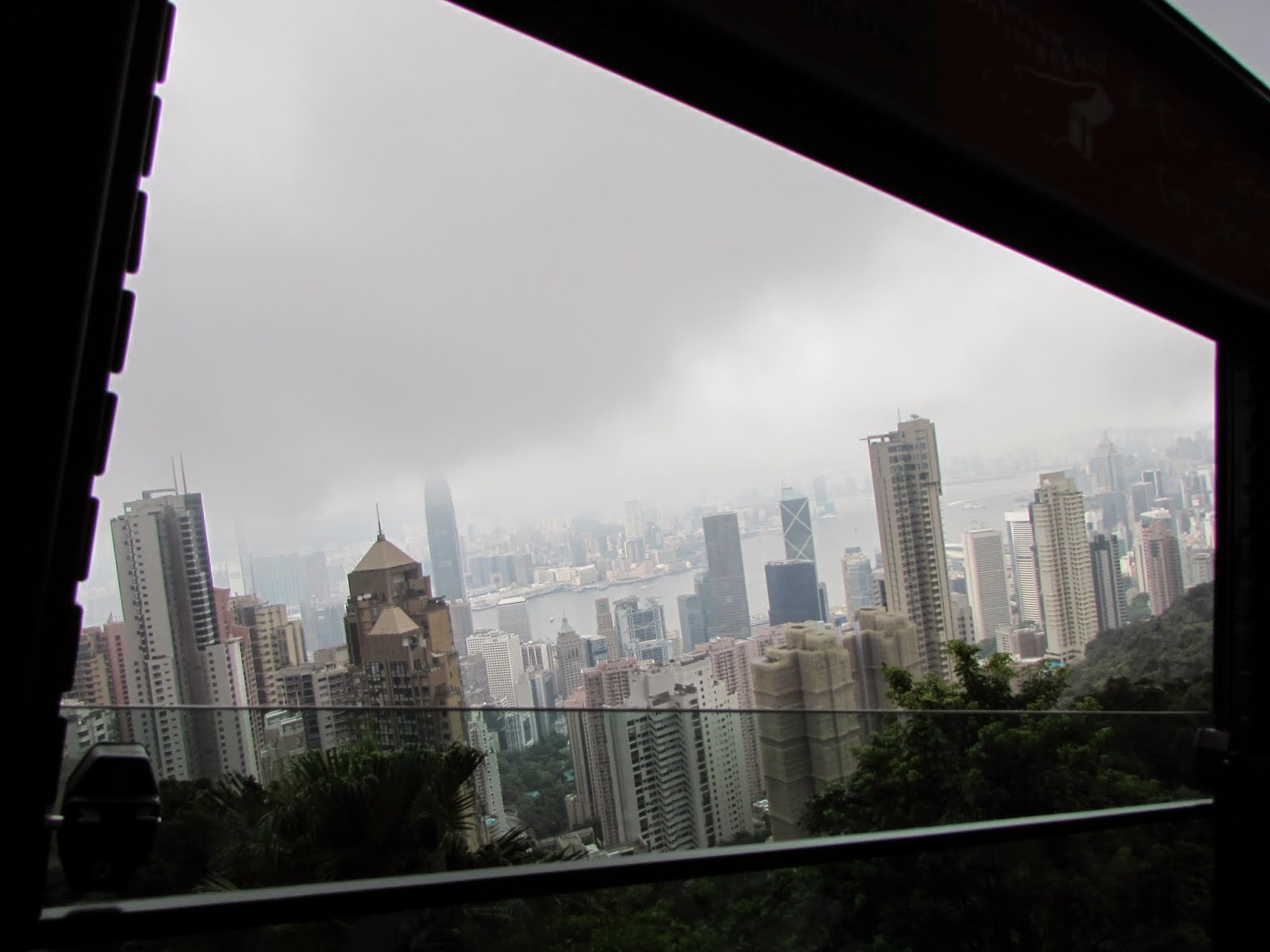 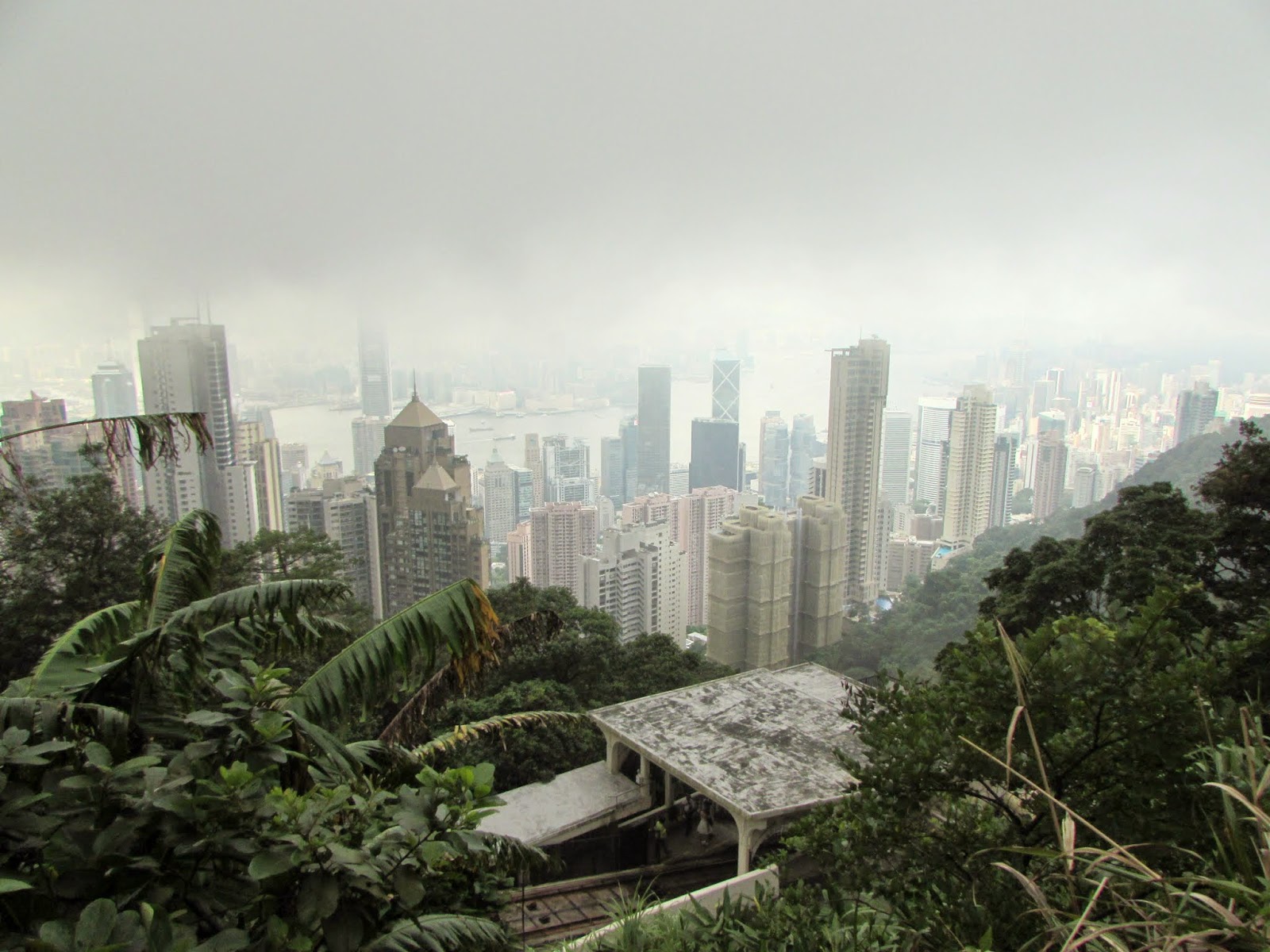 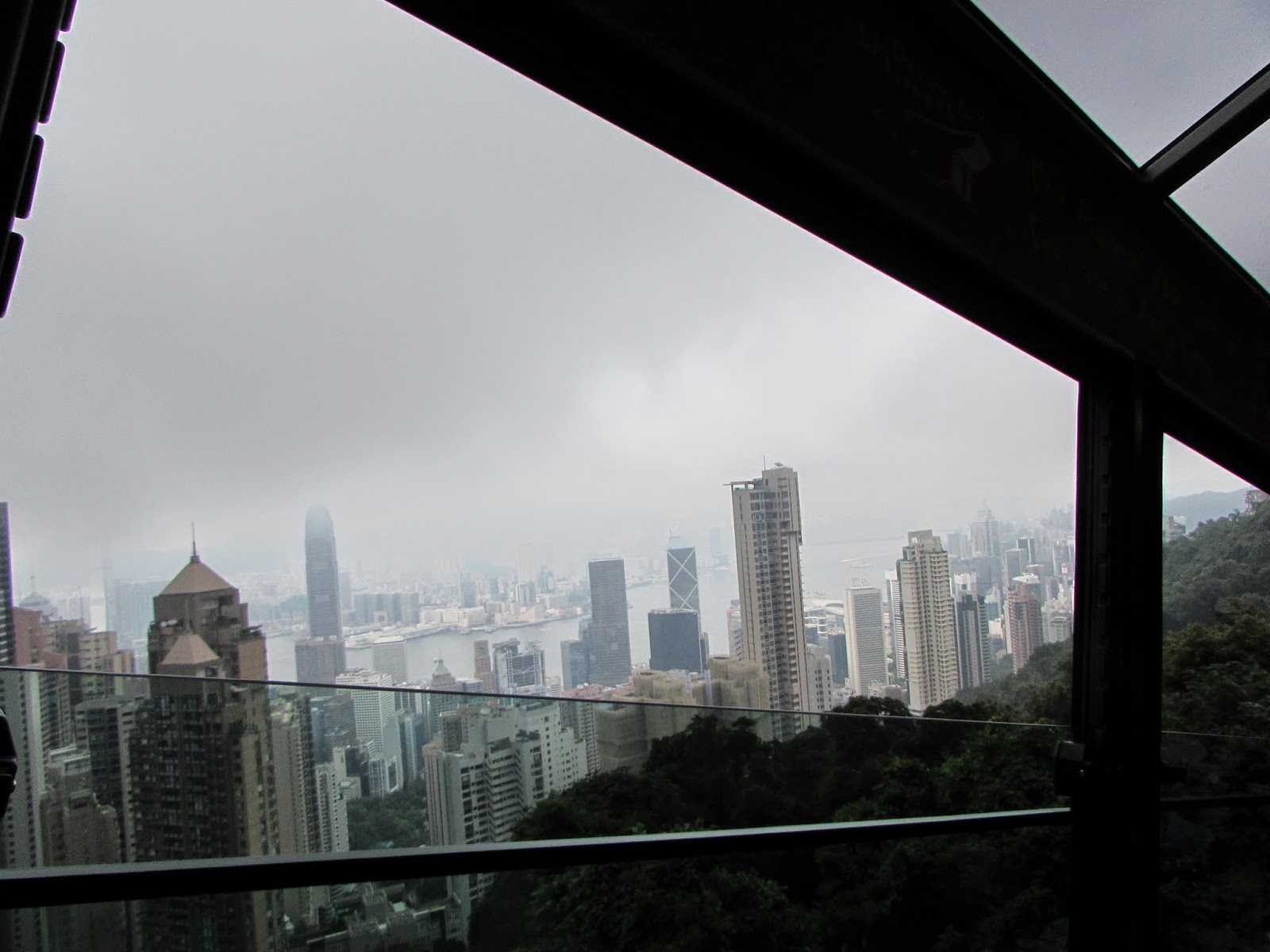 I wish I could gush about the spectacular view from the top of the peak, but in fact once I reached the top, I was enshrouded in mist that reduced visibility to twenty feet in any direction, as well as shops pushing commemorative memorabilia emblazoned with sights from the peak on clearer days. After surveying the mist around me, I decided to skip the tram line and walk down the mountain. The walk down the jungle path (with the occasional mansion thrown in) was appropriately contemplative--until I saw a spider the size of my face calmly suspended from a tree. Then I entered flight mode, bouncing down the peak at top speed and reassuring myself out loud that I was going to be okay.

With my newfound time, I've decided that the best thing to do is to engage with my project as much as possible, and so I have signed myself up for intensive Mandarin tutoring and am looking for an erhu (Chinese two stringed violin) teacher. I've also tried to get out and meet new people in lots of different places, and have attended a swing dancing gathering, a Couch Surfers meeting, a dramatic reading of short fiction, and this evening, a concert by a German jazz singer. I have met a Russian dance teacher ("I hate Obama," he told me, "but we can still dance"), a Czech guy whose brother's girlfriend is a violinist in the Czech Republic (I got contact details for later), a Korean who spent the last few years in Africa, a Hong Kong international lacrosse player cum policeman...I also stalked a group of people solely because they were carrying violin and viola cases--if you can't tell, I'm desperate extremely enthusiastic about engaging with the local scene.

I was very fortunate to have met Alexis Alrich, a composer and music critic in Hong Kong, whom I am hoping to assist in her work. Much of her music is inspired by the musical traditions of Asia, and she has often composed for both Western orchestral and Asian instruments. An editor at WSJ connected us, and she very kindly invited me along to a concert she was reviewing (and on her birthday, no less)! Over dinner, I was astonished to learn that her advisor in graduate school was Lou Harrison, an American composer whose work was the focus of my senior thesis, and that she is also studying erhu. I absolutely enjoyed learning about her projects and experience as a 'crossover' composer in Hong Kong, and hope that I can continue to collaborate with her in the coming weeks.

I've been really lucky also in that the other interns at WSJ I met in my first few days in Hong Kong have been an absolute delight, and we've become fast friends. Some of us went out for phenomenal Moroccan food last weekend, and afterward they insisted I try sago pudding, a local specialty dessert, with durian, a polarizing fruit some love and others swear smells like rotting flesh. Personally, I have no qualms with durian, and had a terrific time hanging out with the others, who are Hong Kong natives and eager to share the best the city has to offer. I also went with Regina, another intern and fabulously interesting person, to Lantau Island, where we took a clear-bottomed cable car to see the Tian Tan Buddha, one of the largest bronze sculptures in the world. We took in the incredible scenery (the cable car went hundreds of feet over a sea inlet) and the 'wildlife,' which apparently meant some loose cows that seemed more a potential liability than an indication of the island's untamed fauna...but thankfully we escaped getting head-butted. Perhaps the best moment of the entire journey was when the tranquil atmosphere of the cable car ride was suddenly shattered with Regina's shriek, "Oh my god!" The other passengers nearly jumped out of the car with shock. "It's the Buddha!" And indeed it was, the enormous benevolent being slowly emerging in the distance as the cable car sailed up into the ridge. 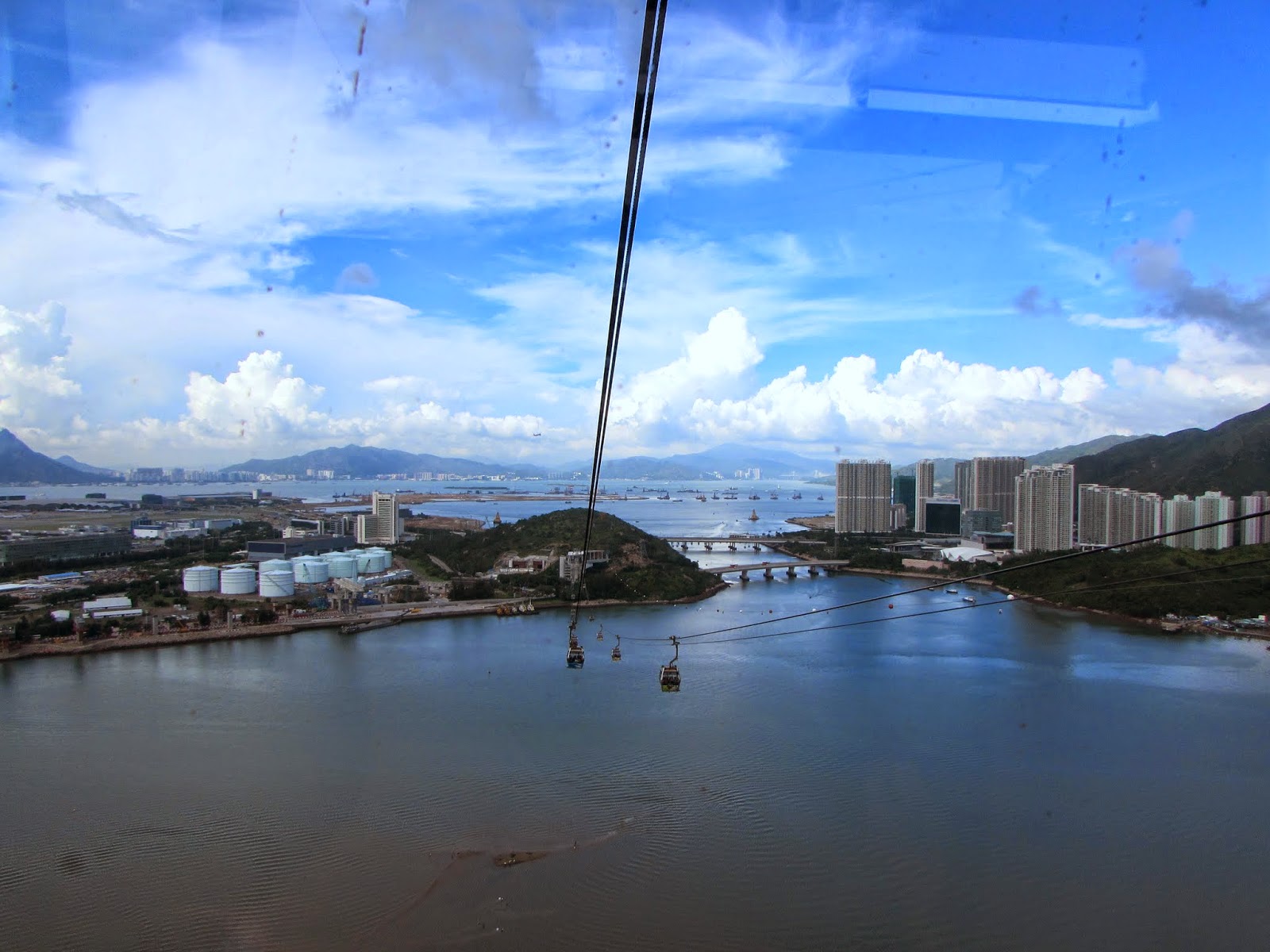 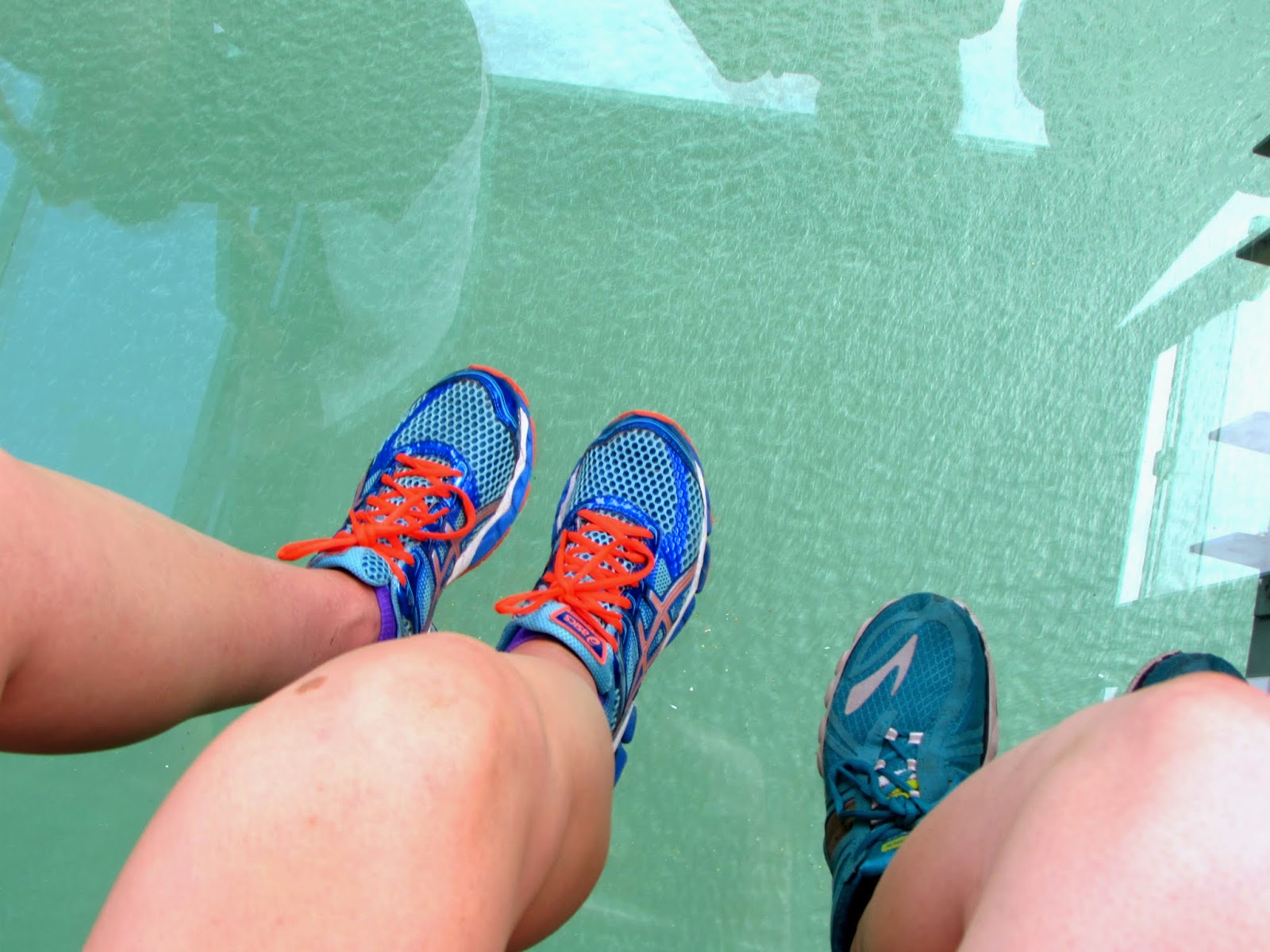 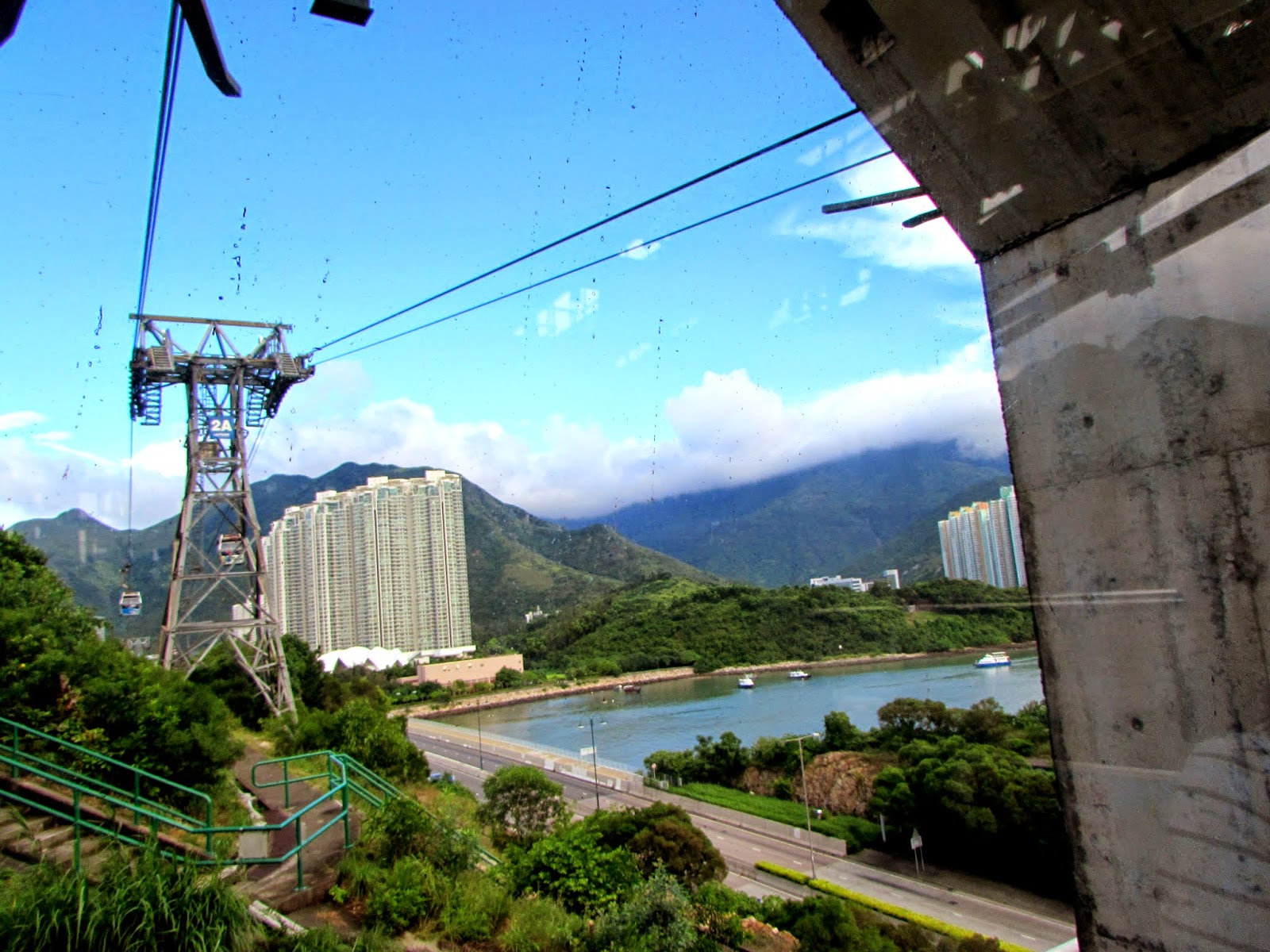 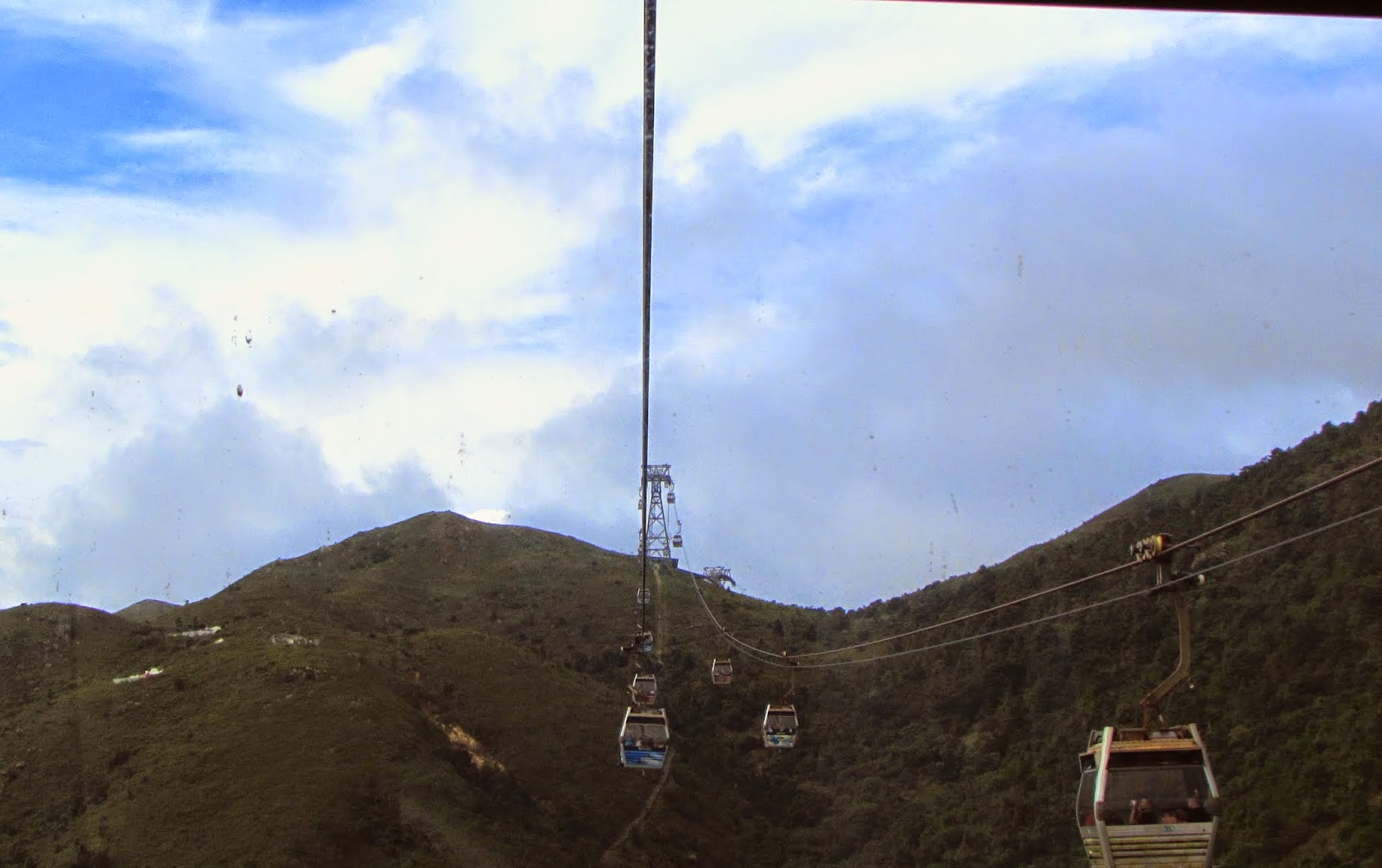 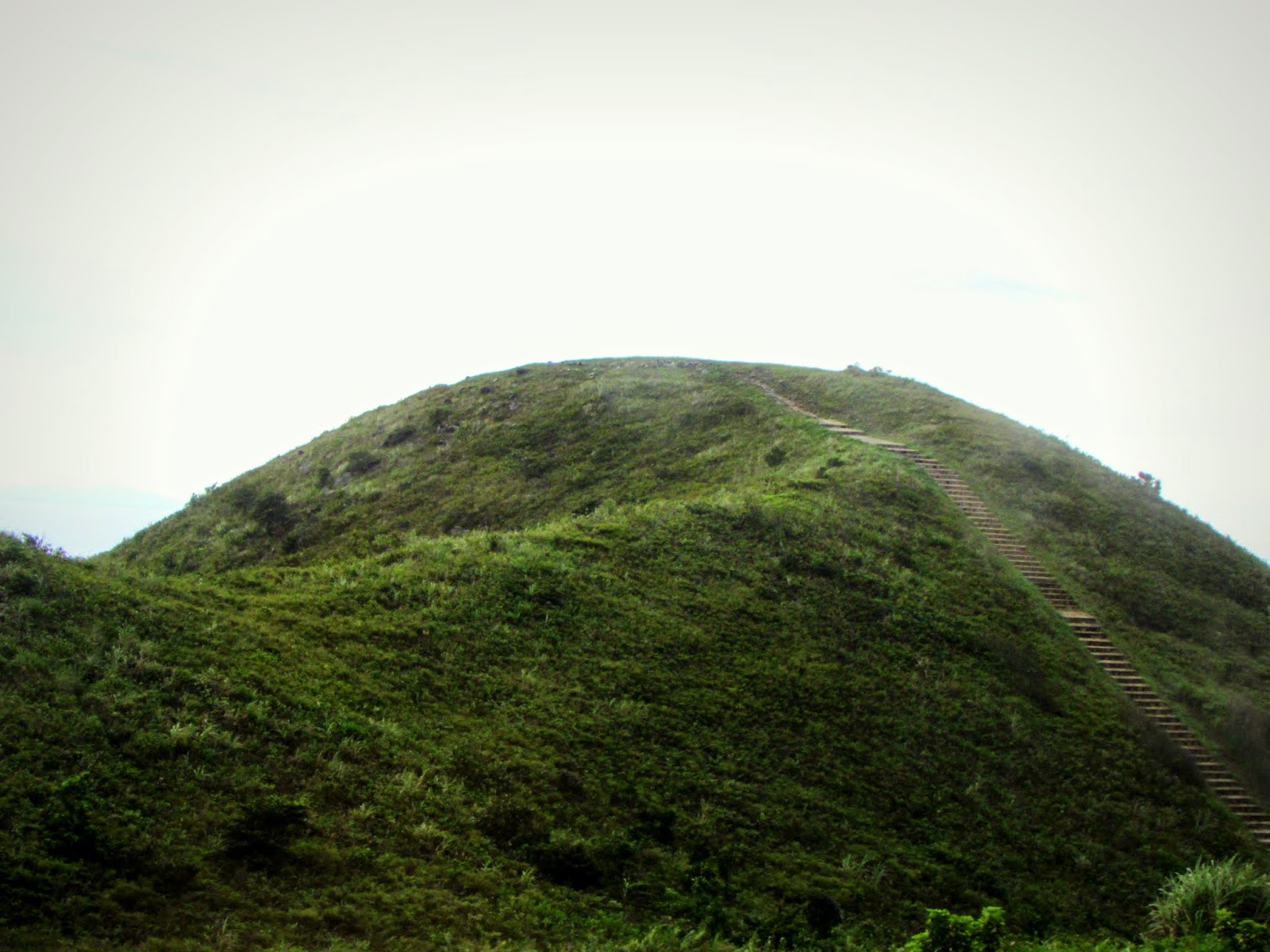 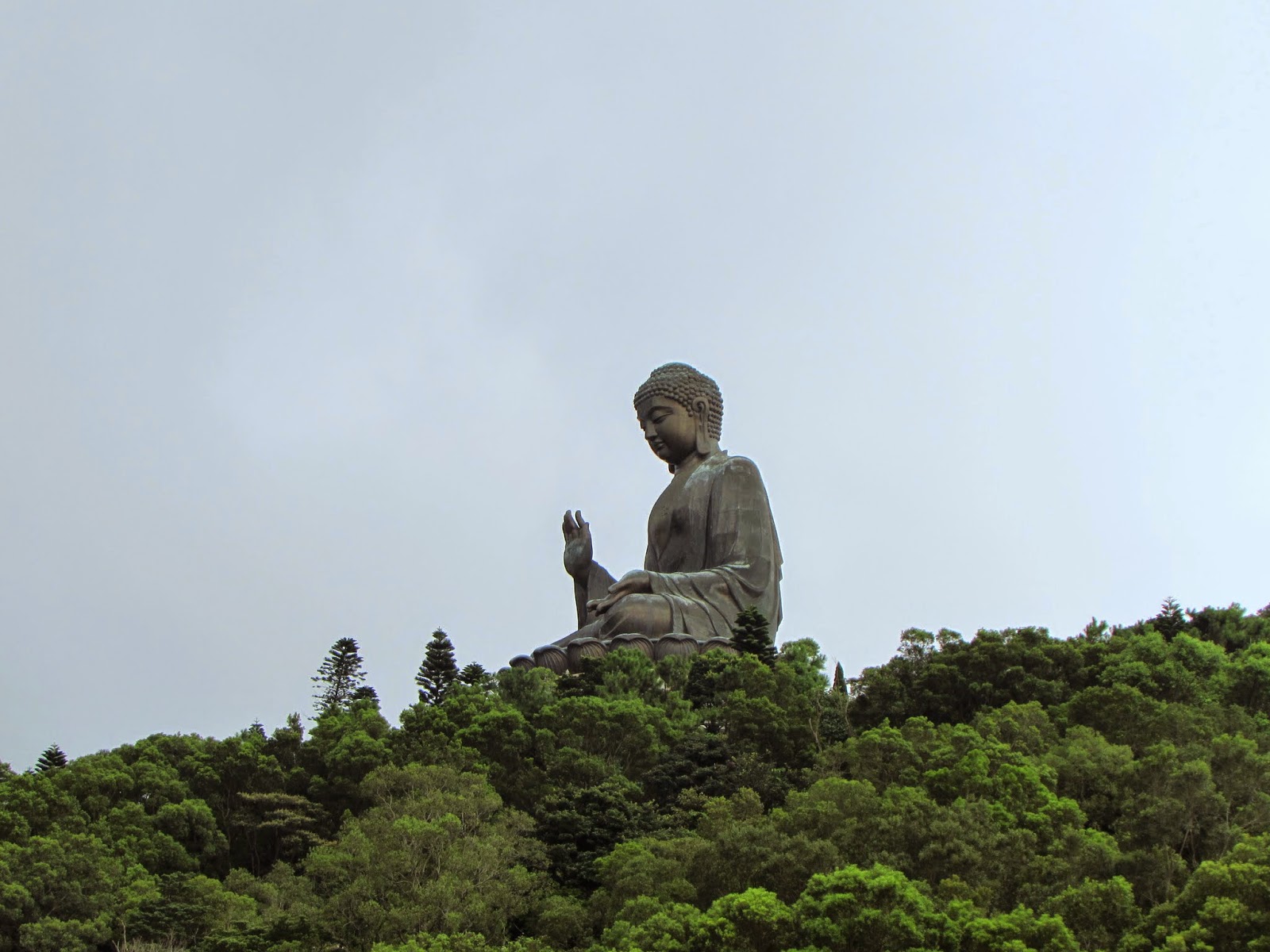 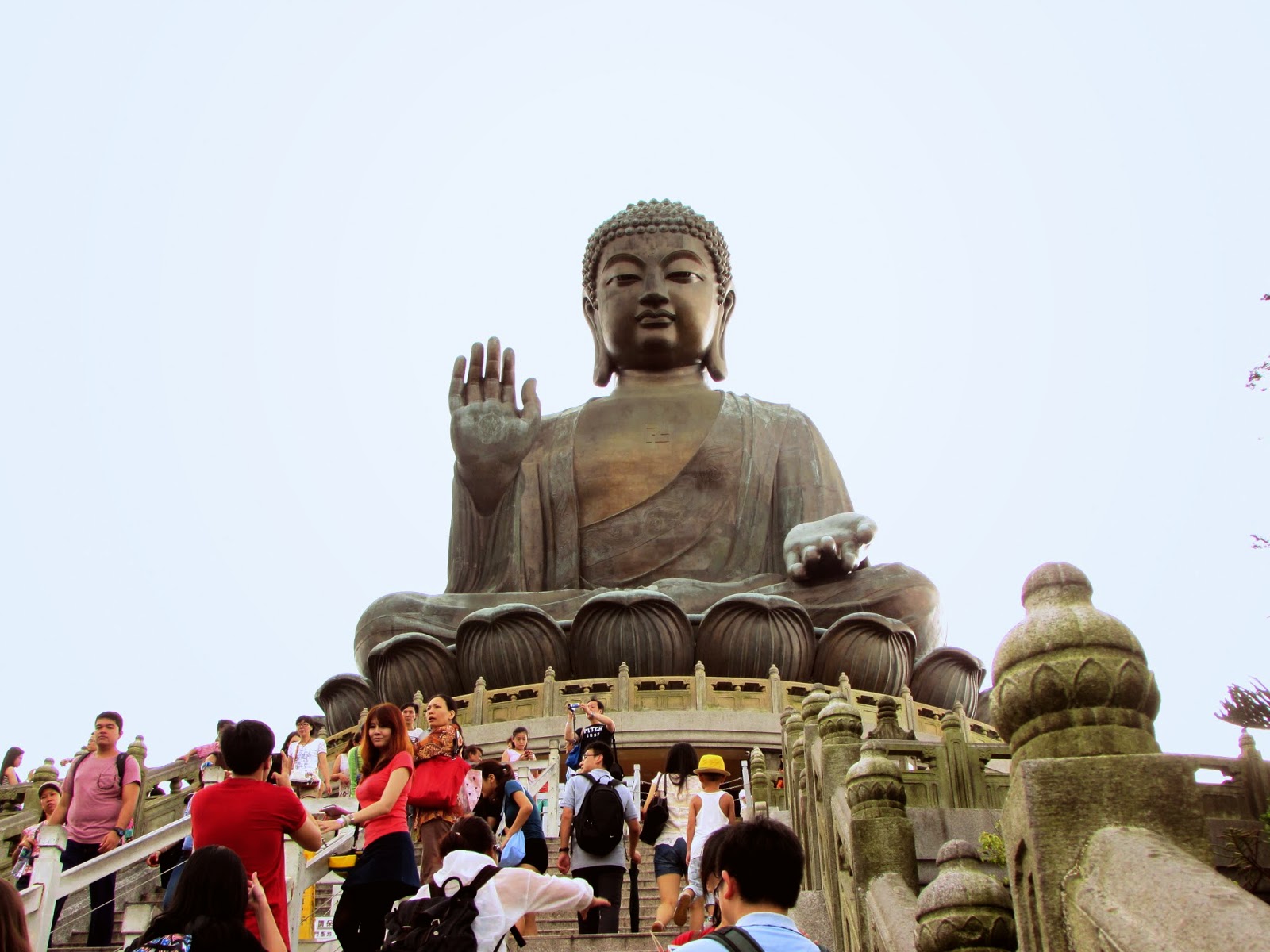 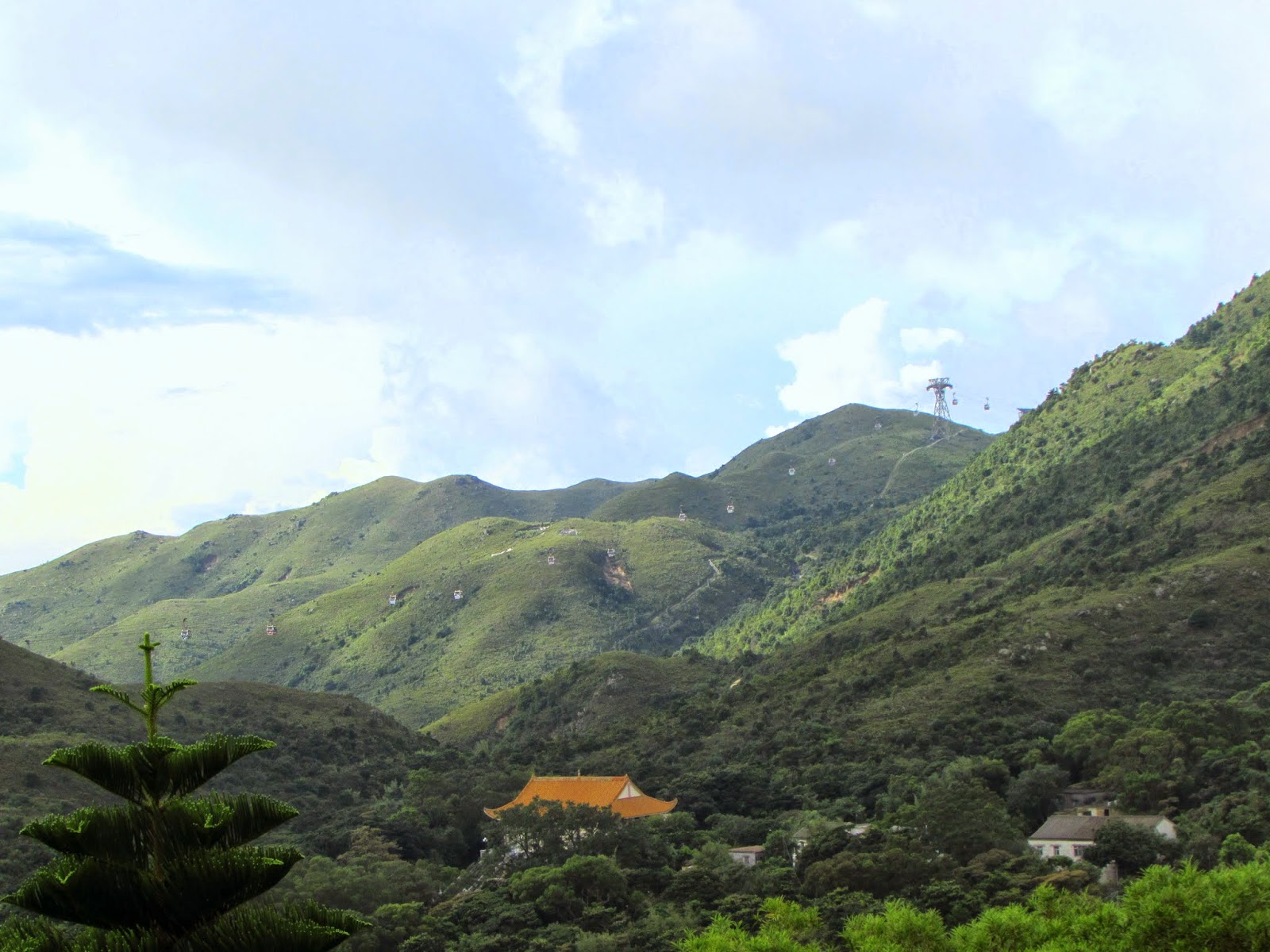 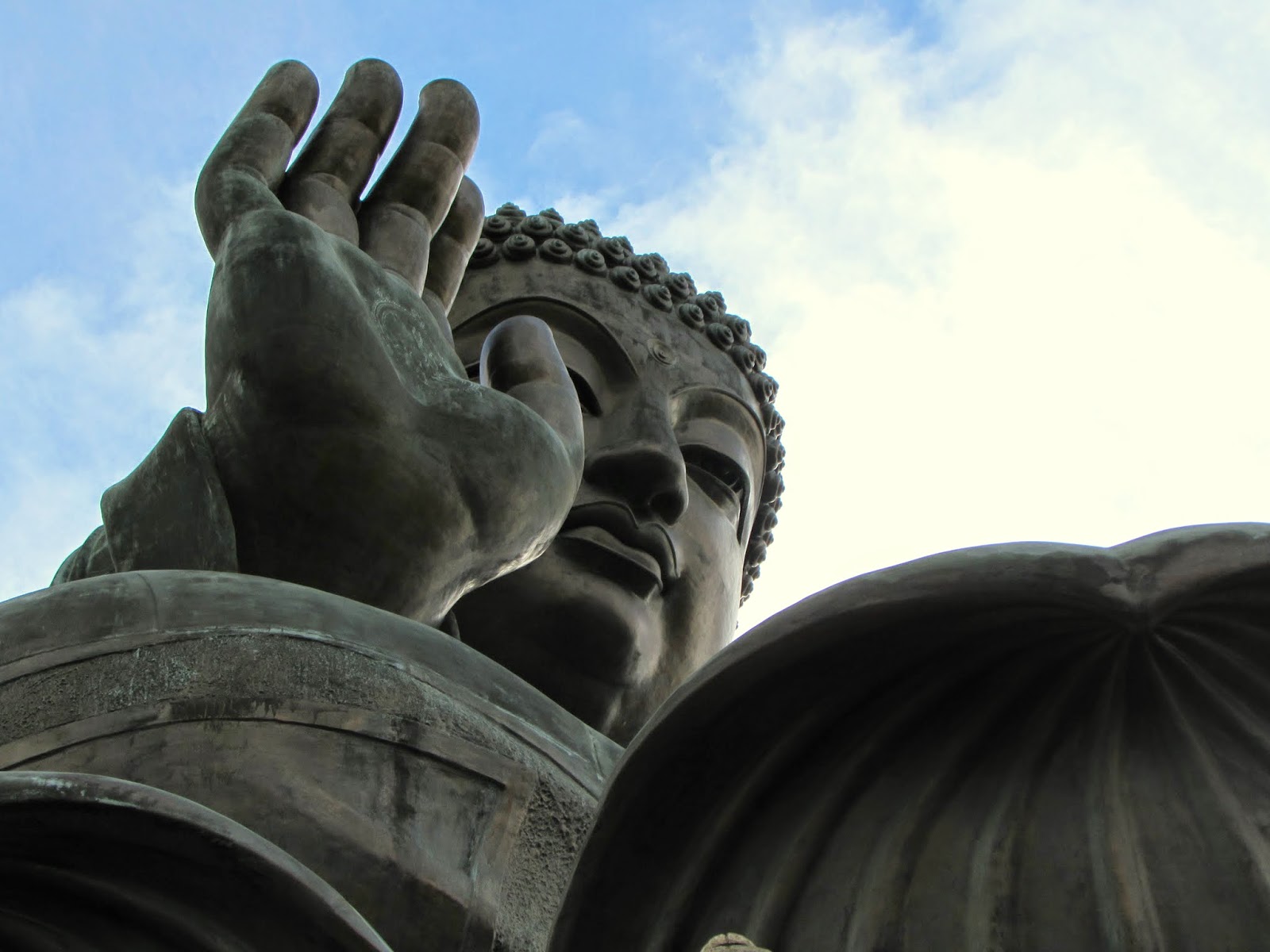 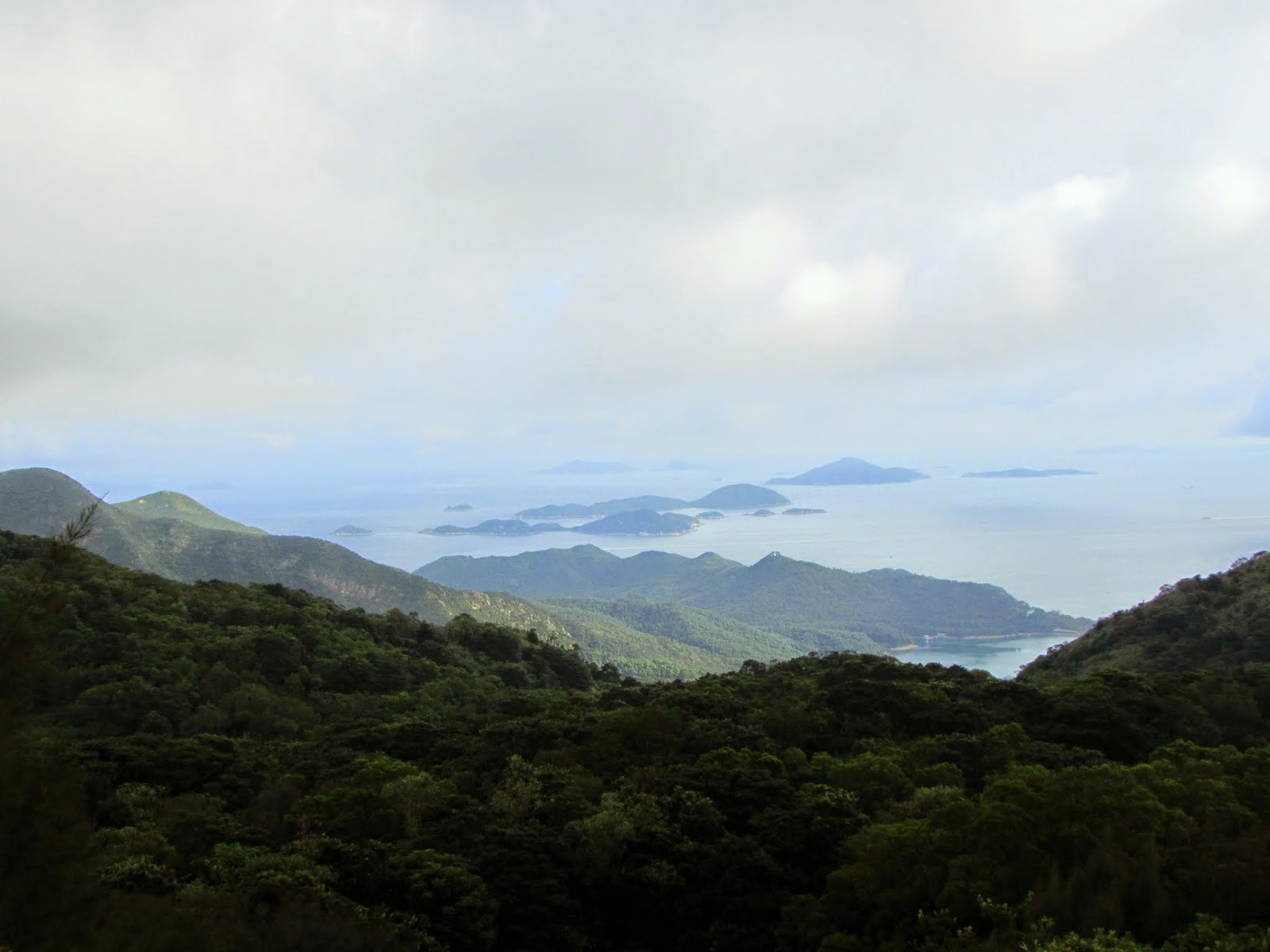 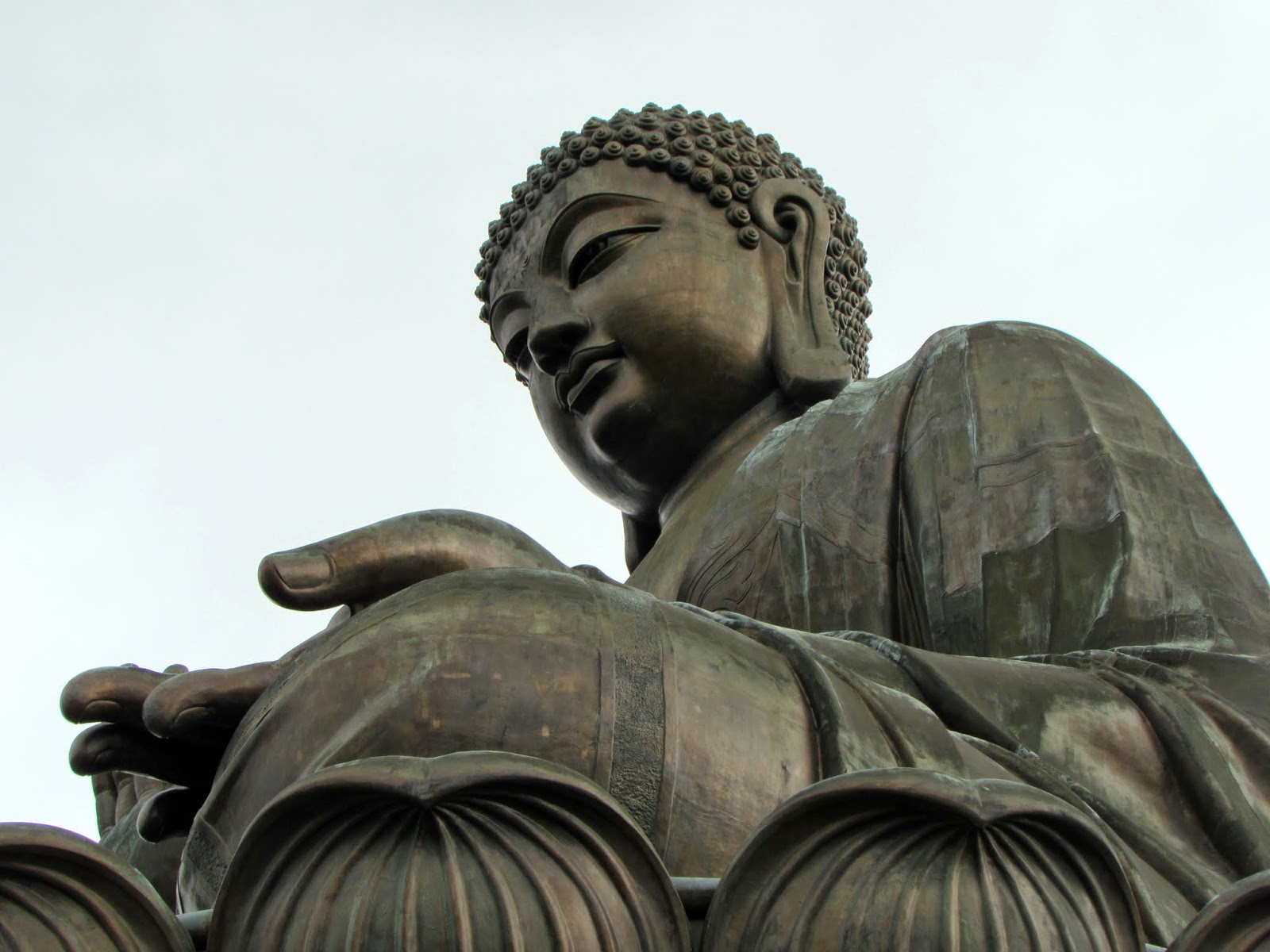 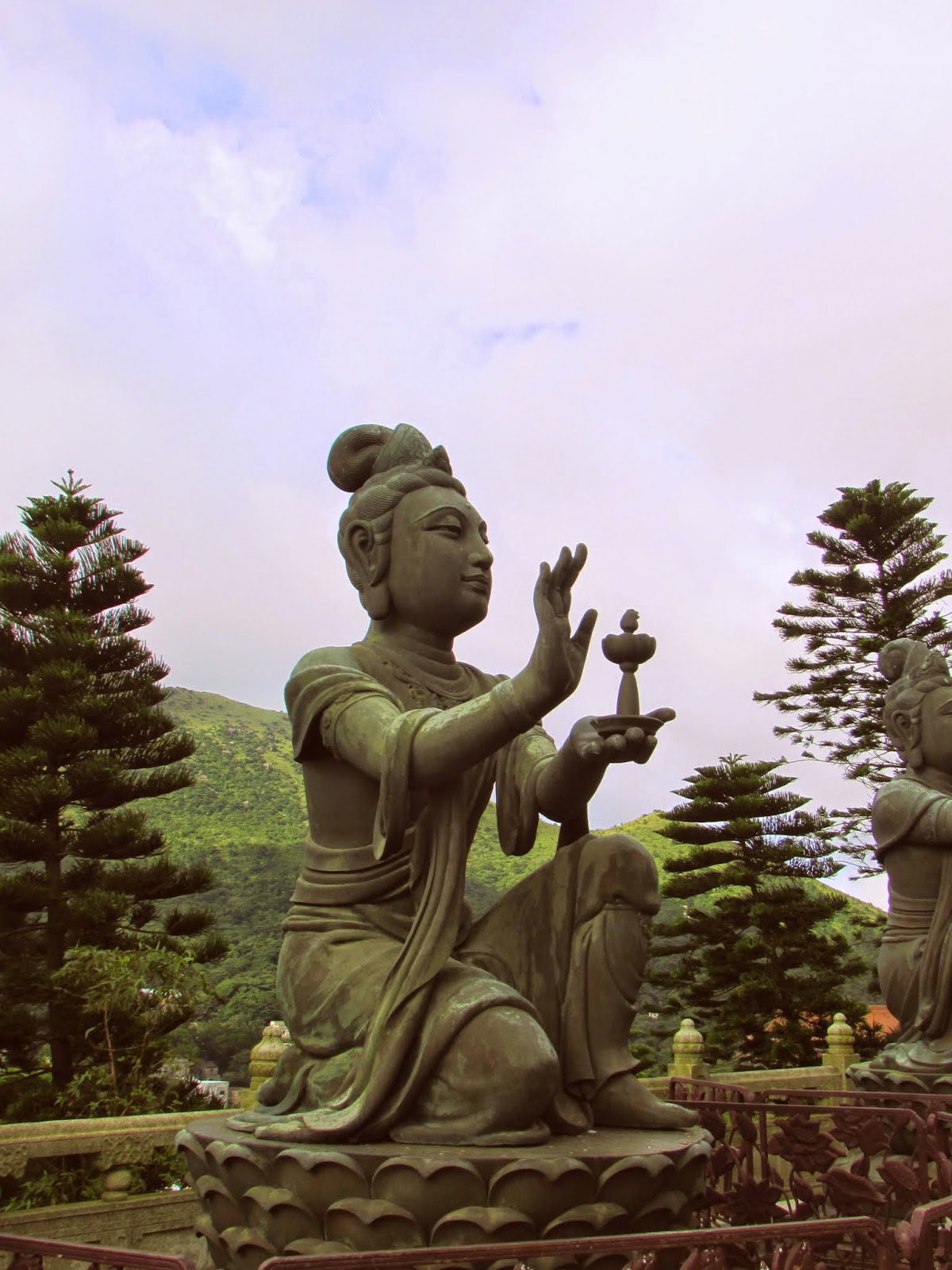 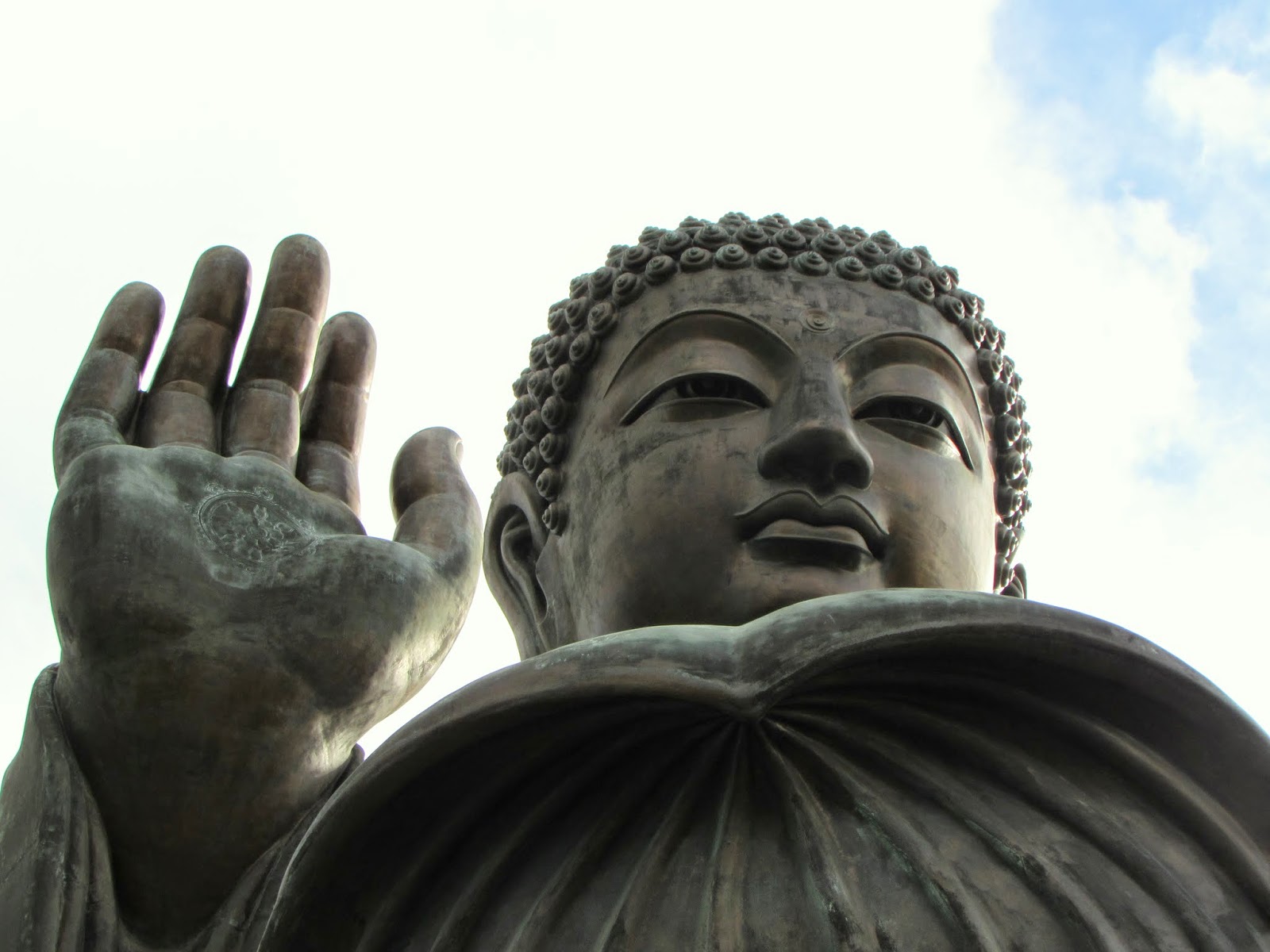 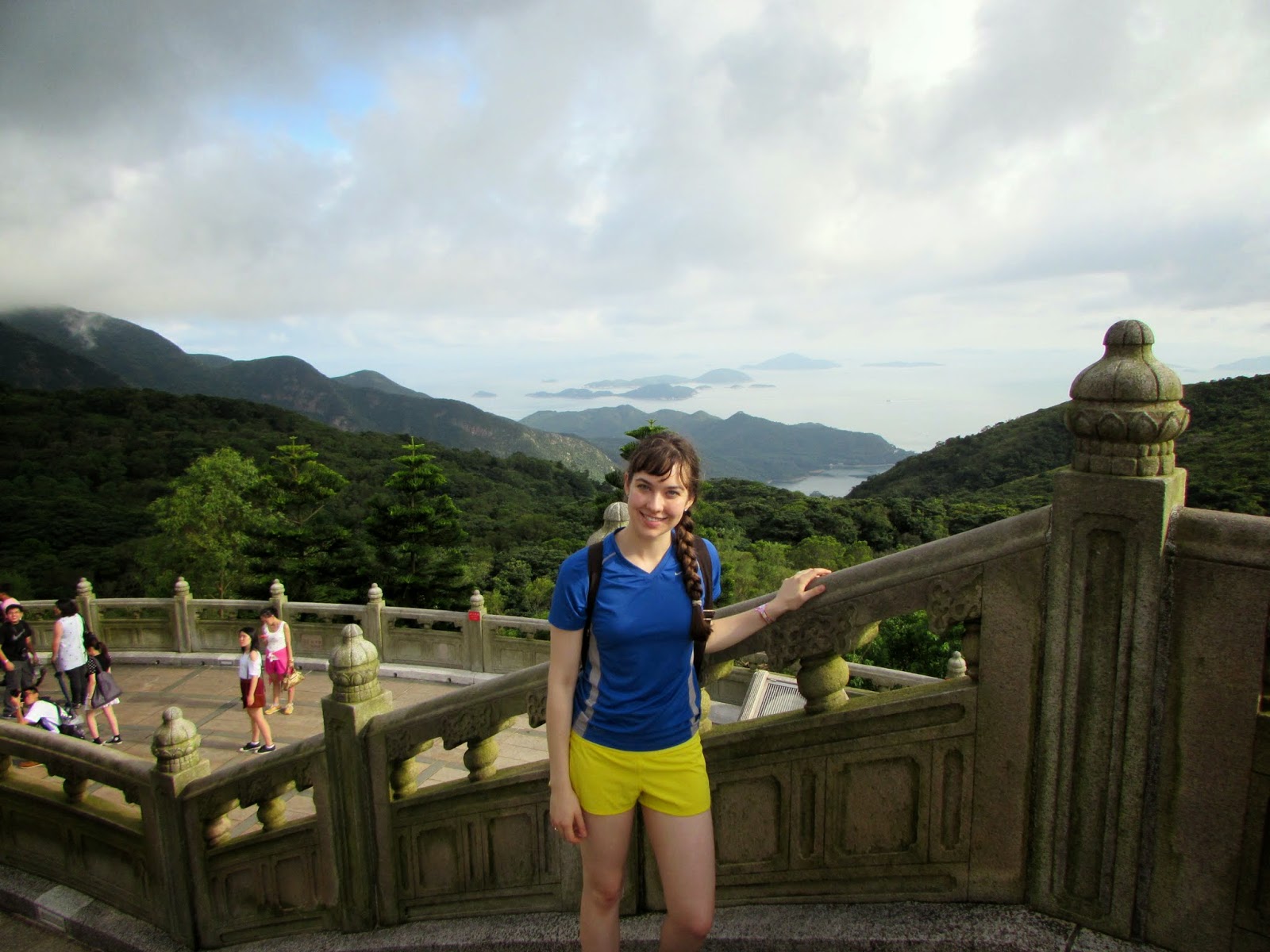 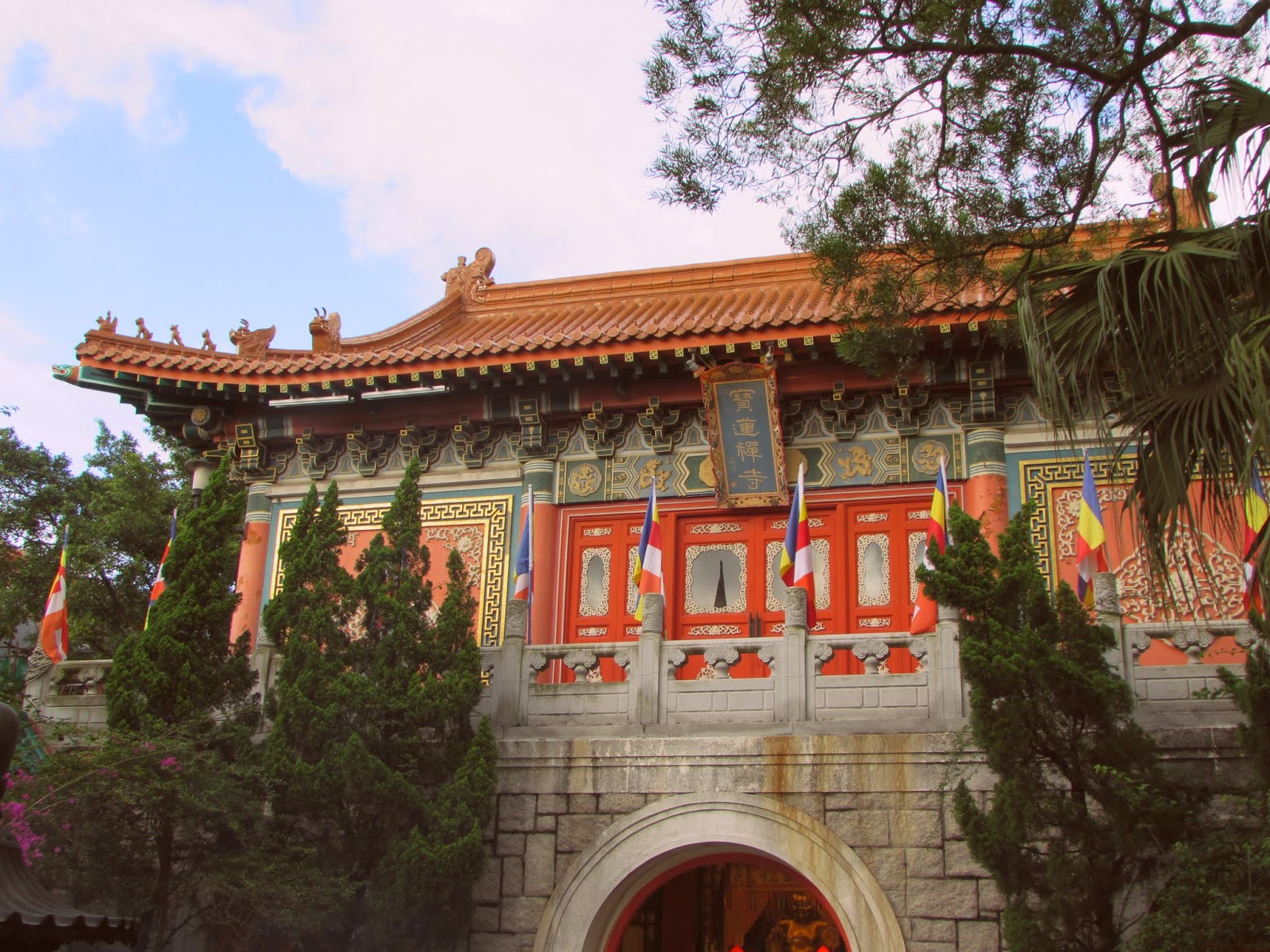 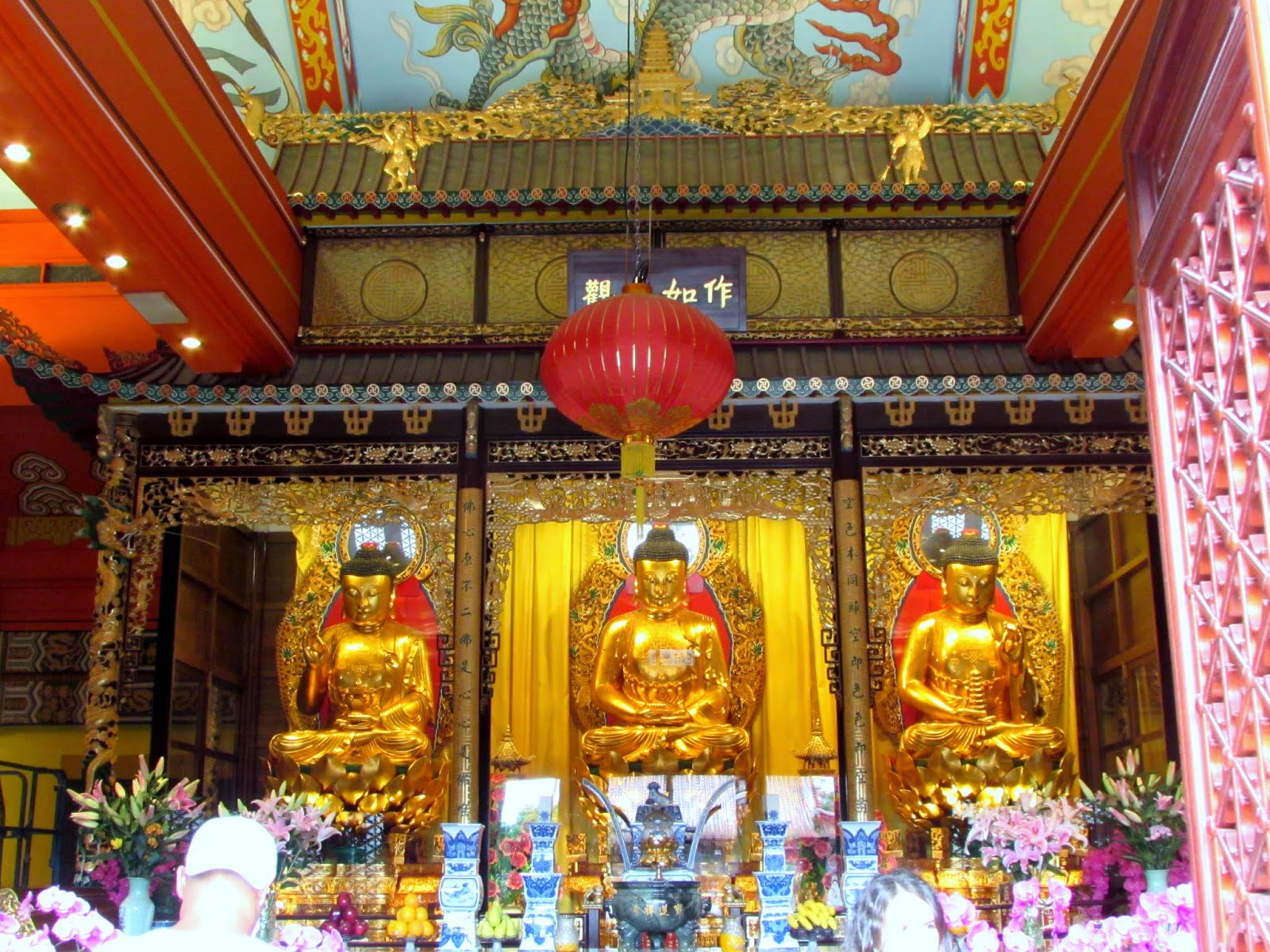 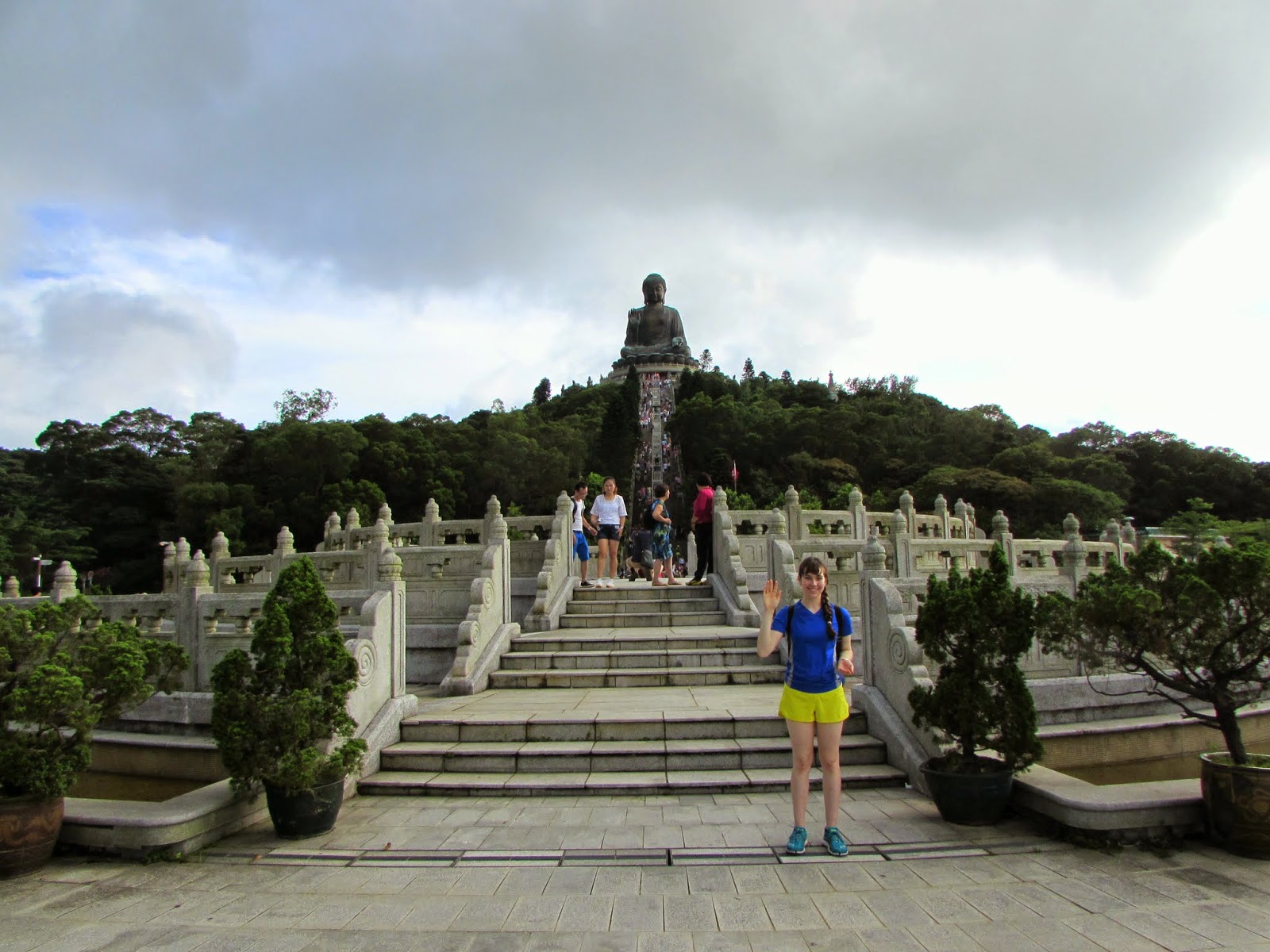 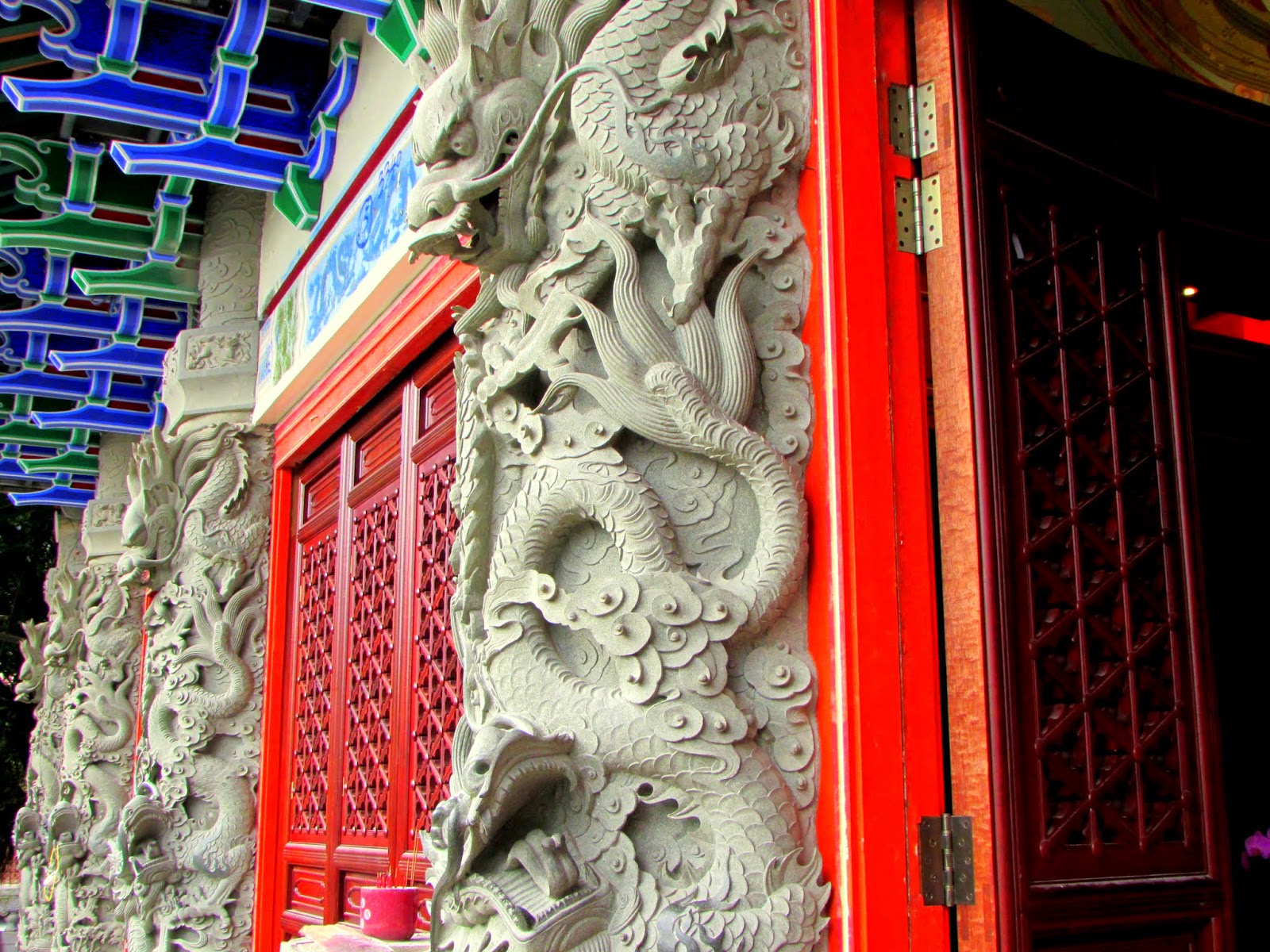