In with a gallop and out with a whinny

You will be heartened to hear, no doubt, that I am still going strong with the erhu lessons. I'm still not sounding terribly great, but I am certainly burning my way through repertoire. There's a clear difference in the way my teacher, Nick, teaches me erhu in comparison to the way I have studied violin through the years of lessons growing up--rather than slaving away over the same piece for many lessons, as soon as I figure out a piece's notes and have satisfactorily grasped its technical elements intellectually (if not in practice), we get busy learning a new one. In terms of erhu sound production and quality, my violin training may even be a handicap--placing the notes and knowing what's in tune already comes quite naturally to me (and the notes are not so hard yet) so in comparison to your average beginner my erhu ability seems quite prodigious. In fact, I think a lot of my erhu 'talent' is me basically coasting on the translatable violin technique while playing things that are actually way above my level...I would likely benefit from a few weeks of mindless repetition of the things that are trickier for me (slides in both directions, and of course the dreaded bow hold)!

Right now, I'm wrapping up learning one of the most famous pieces for erhu: 赛马, or "Horse Racing." The piece is definitely a crowd-pleaser, as it's a fast-paced, high-energy tune with a lot of special effects that mimic the sounds of horses--the gallop of hooves and a screeching whinny, to be specific. The "neighing" sound uses a rapid-fire, controlled bouncing bow technique called feigong, or "flying bow," which besides being very difficult, is featured in all of two pieces in the canon of erhu music. My teacher says it took him a year to figure out how to do the technique, and even then it was just an accident. Needless to say, I am a far ways off from getting my feigong technique in hand--and not to be too pragmatic, but seeing as there are two main pieces that use it, perhaps it's not the worst thing if I don't get it down...Nonetheless, I am gaining a lot of useful information from learning "Horse Racing." For instance:

"When you play this piece, you must imagine you are the horse. You see the other horses running after you. So you are running and running and they race after you. And then you win and you are proud! In this part you are celebrating because you have won the race, and the bow is long and singing. And then you have to race again, and they are running after you again. In this part--those are the hooves of the horse. The bow stops short to make the sound of a hoof. And then at the end, you make the horse call. Chinese people love to mimic the sounds of animals--and so you make the sound of the horse here!"

(Here's a version to give you a sense of what the piece can sound like...)

In case you were wondering, there are three steps to the horse call:
1) Slide up (which on an erhu, is down) two octaves on a quick down bow
2) On an up bow, shake your right hand uncontrollably--but in a controlled fashion
3) Simultaneously slide up slightly
4) Repeat two more times

Some other gems from my erhu lessons:

On cleaning rosin off of erhu strings: "Wipe your nose with your fingers and use the oil to clean the strings."

Also, Nick has invited me to join his Chinese instrument ensemble's rehearsals. Apparently it's a casual group of both serious and beginning players. He told me, "There are people there who are worse then you," which is about the nicest thing one can say about my erhu playing right now, so I'm pretty psyched to join in!

Besides that, I'm just going to leave you with some pictures from the flea markets in Sham Shui Po. My computer went on the fritz, and after having found a recommendation online for the cheapest and most reliable computer repair store in Hong Kong, I set off for Sham Shui Po. For those of you who are not familiar with the area, Sham Shui Po is not renowned for being the loveliest part of Hong Kong, and questioning my own sanity I dropped my non-responsive machine off to the "Computer Hospital," aka the sketchiest electronics stall I have ever seen. Much to my surprise, the next day I got a call from one of the ladies there--"Your computer is fine! Your charger is the problem!"--so I went back much relieved to collect it today. I then ambled around the area, which is packed and jammed with impromptu stalls replete with every possible item--children's watches, drill bits, shower heads, pots and pans, leather goods...There are different levels of shop; some have actually storefronts, others are tents, while others are glorified refuse piles with negotiable price tags. Everyone seems to be smoking there, and it's packed with people (only a handful obvious tourists), but in a way it's absolutely fascinating to wander and jostle through, wondering where all of the stuff came from, how long it has been there, and how long it will remain. My favorite part: standing in a small crowd watching an old man in an instrument junk stall play erhu, effortlessly playing whatever came to mind. He launched into "Horse Racing," and then after the final whinny put aside the instrument and lit up a cigarette. 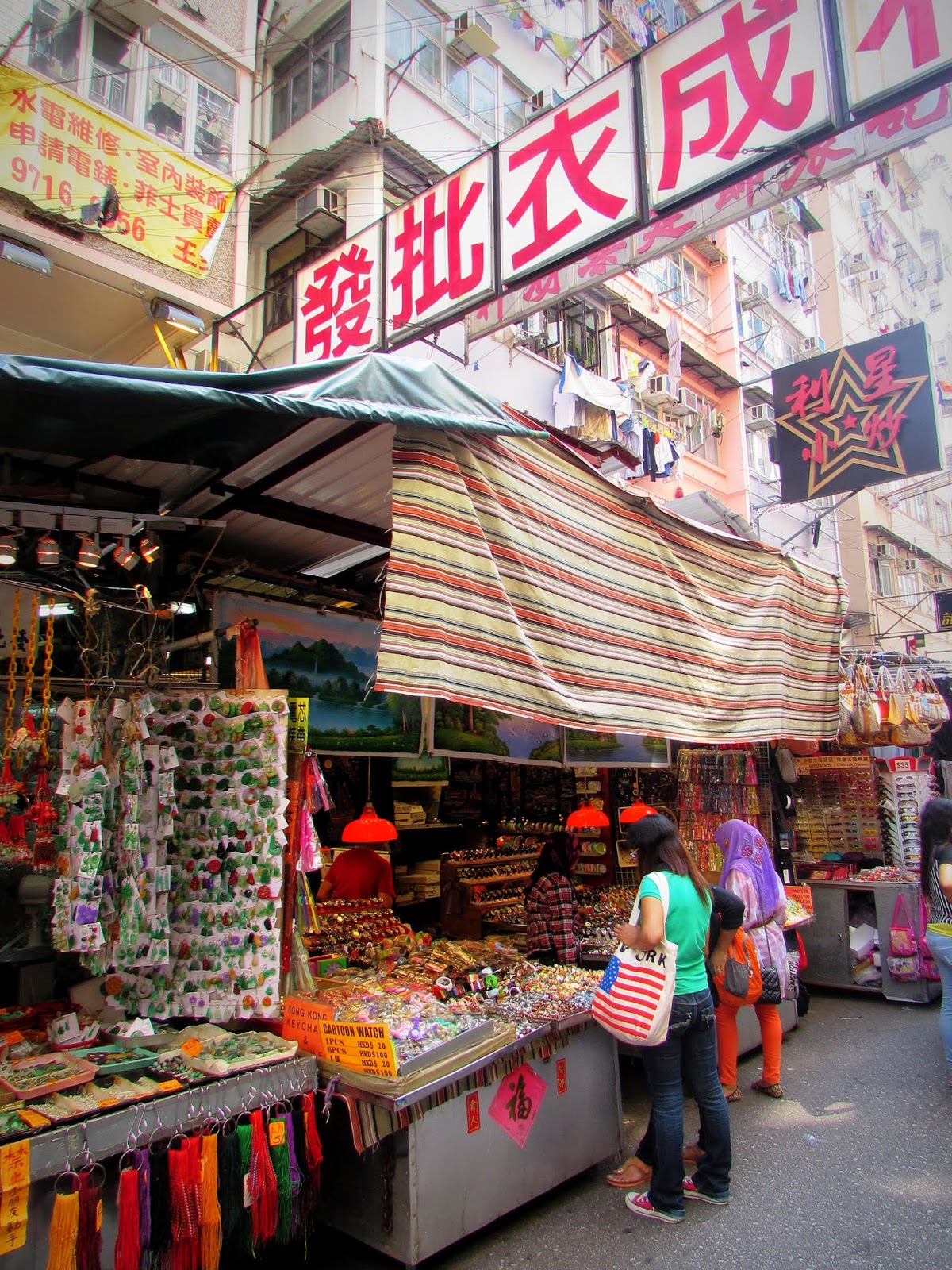 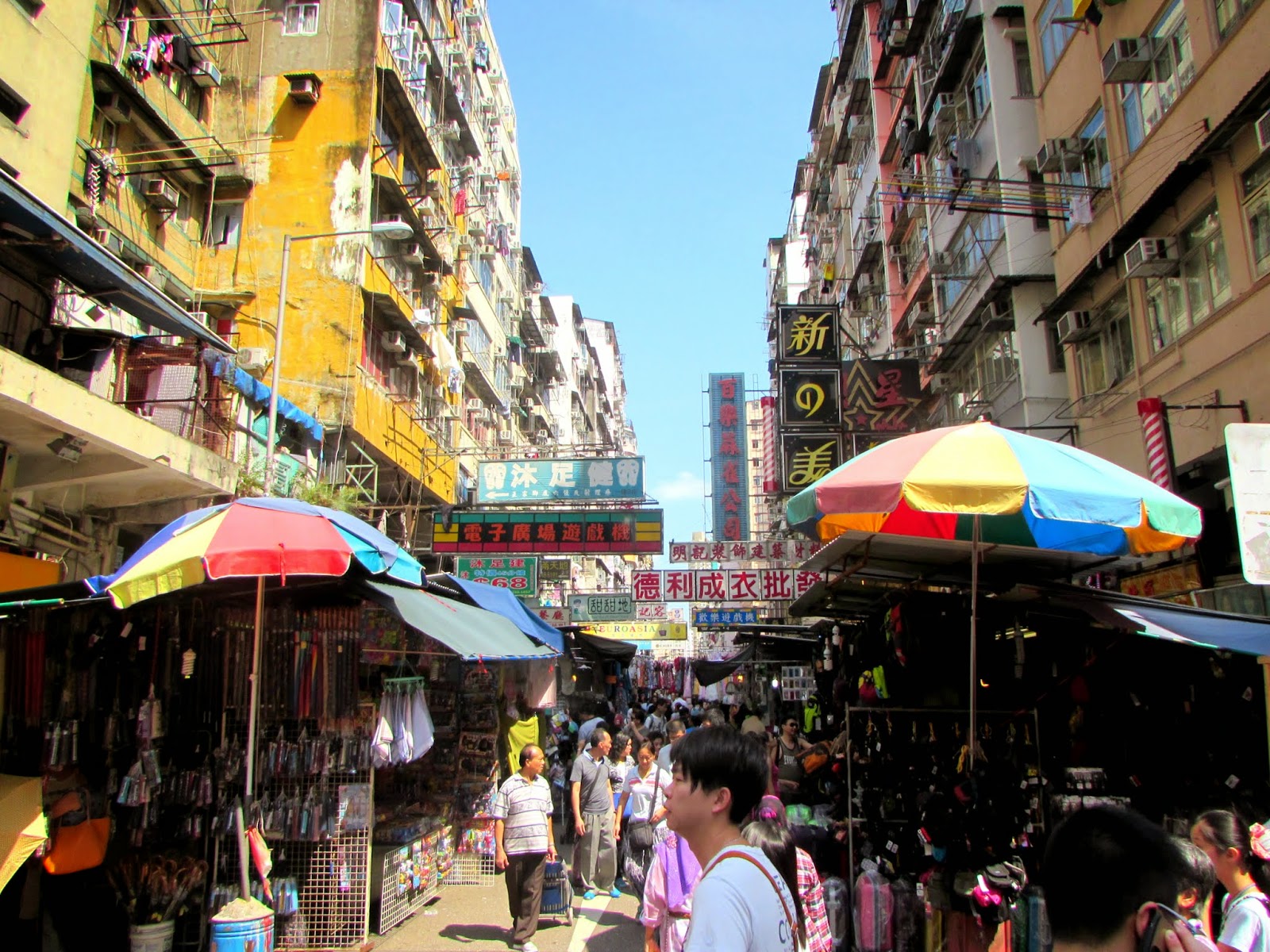 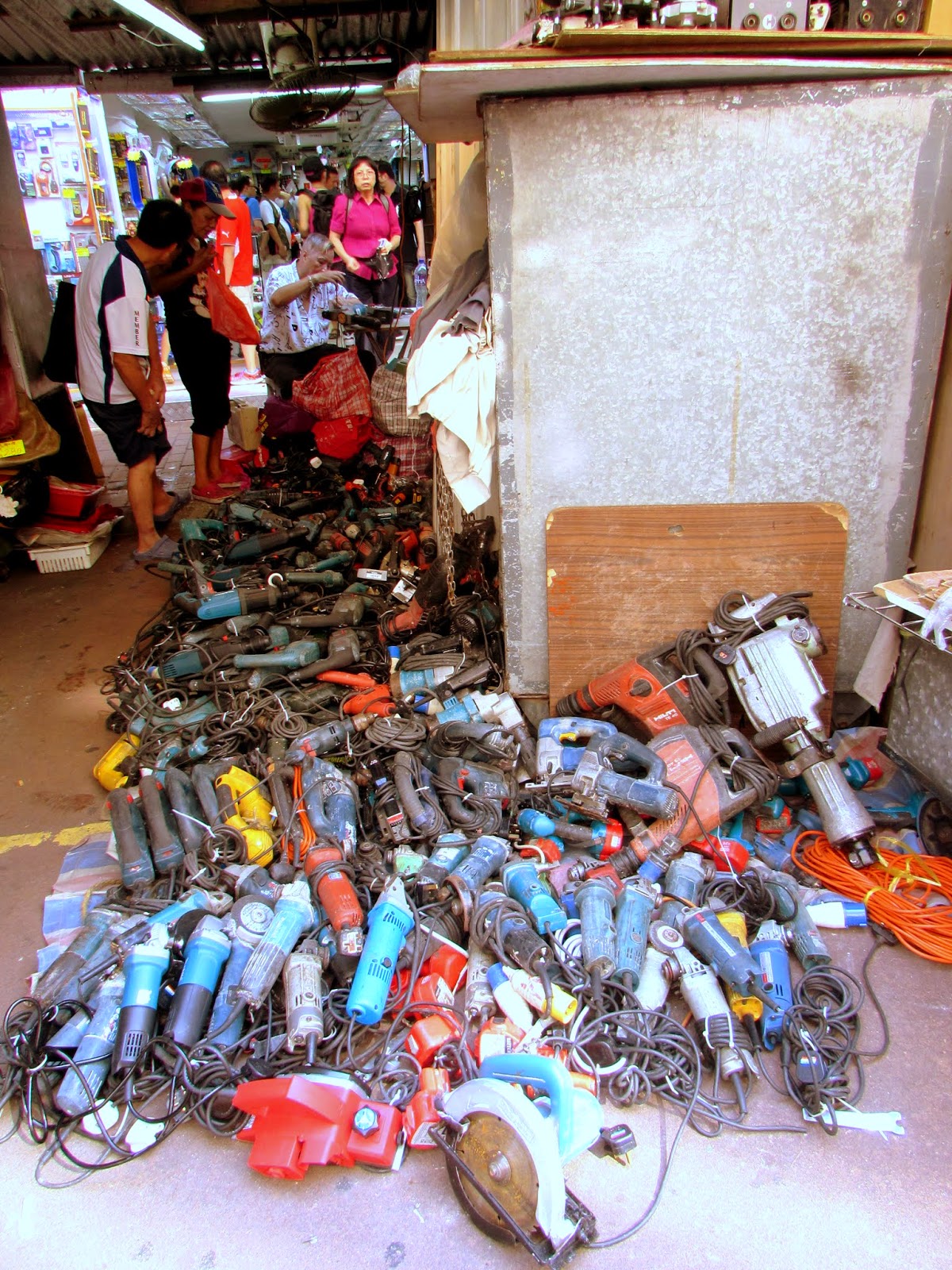 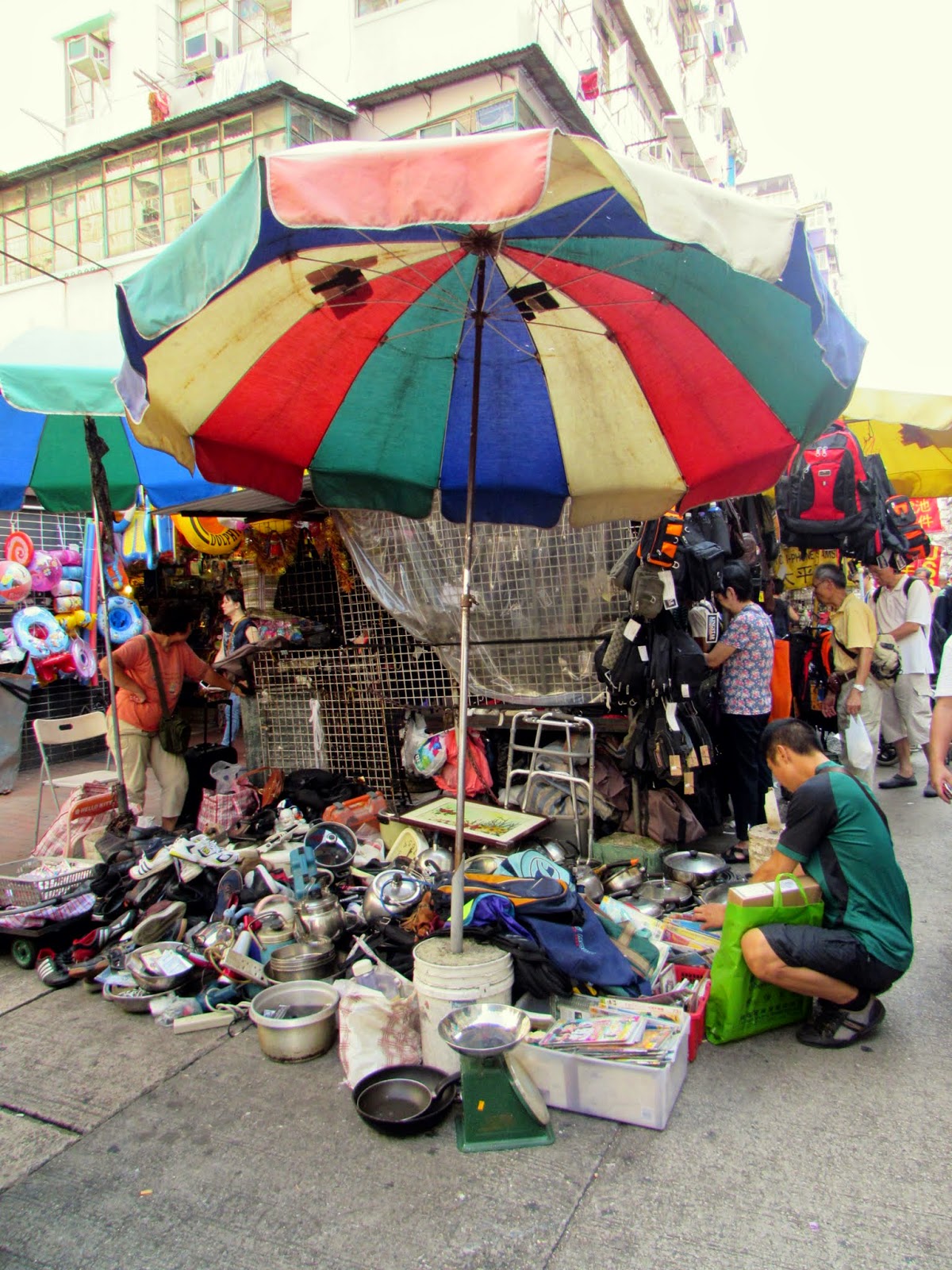 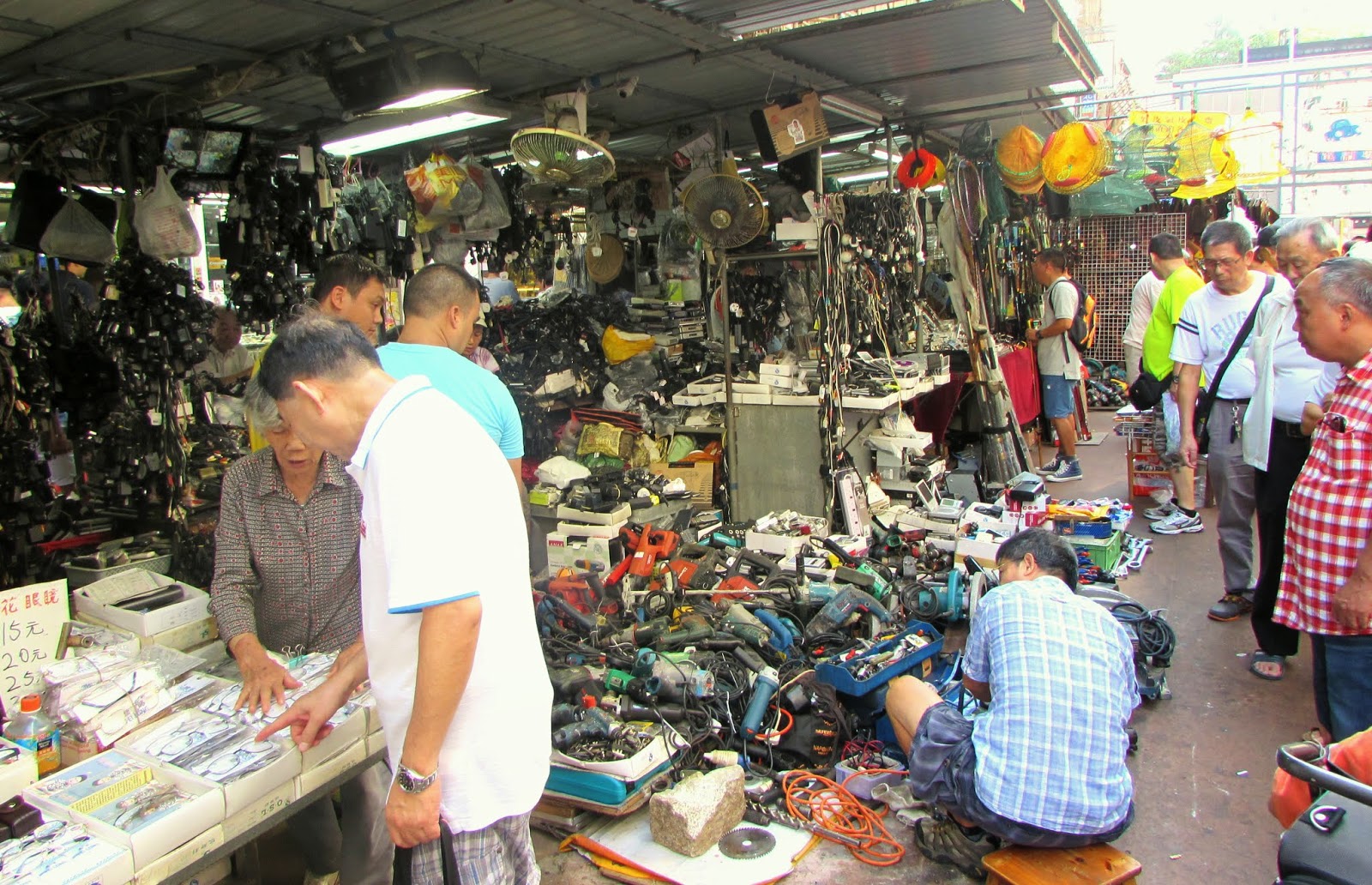 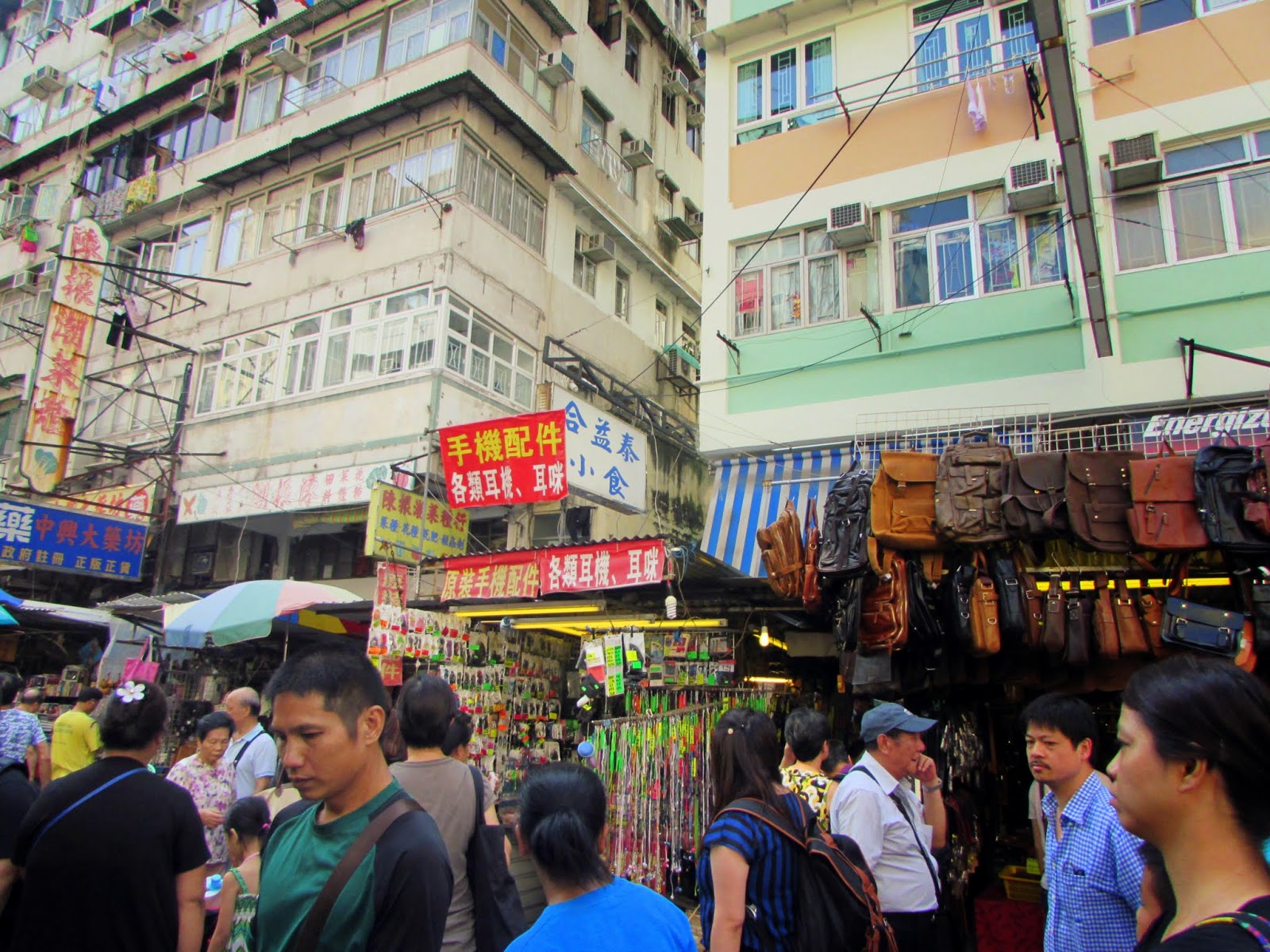 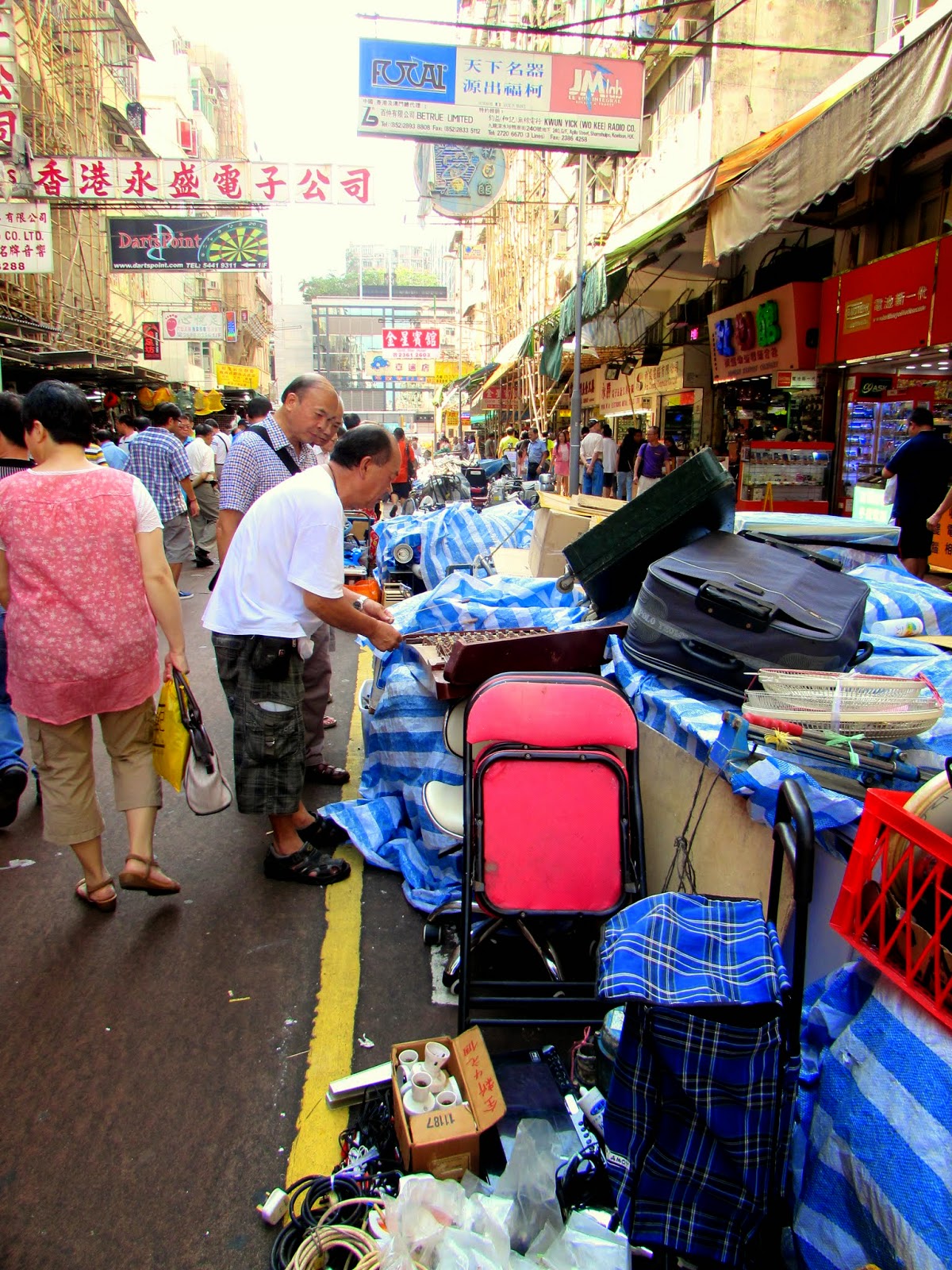