First steps in an unfamiliar China

I am extremely glad to report that I have survived my first full week in Urumqi. Given how rough my transition here was, I suppose any stability could be deemed an improvement--but by all standards things are really looking up.

Where the hell are you?


Good question. I am currently in Urumqi, which is the provincial capital of Xinjiang Uyghur Autonomous Region in China. Like Tibet, it is a region of China with large ethnic minority populations (in particular, a large Uyghur population) that theoretically (if not in practice) have control of their own regional government systems within the province.


The Uyghur [wee-grrr] people are a Central Asian ethnic population of Turkic descent. They are distinct from people of the Han ethnicity (the predominant ethnicity of Chinese people) in their religion, language, and culture; they practice Islam and speak Uyghur (which is a Turkic language that uses Arabic script and is closely related to Kazakh and Kyrgyz).

Why do you care?


My first experience in China was in the summer of 2009. I had taken one year of high school Mandarin and was studying abroad in Beijing through a one month language program. Seeing the sights and getting immersion experience piqued my interest in China, but what sparked my passion for learning about Chinese politics, current affairs, and foreign relations was what I couldn't access--my Facebook, YouTube, Twitter...That summer, thousands of miles away from the Great Wall and the Forbidden City, massive ethnic clashes between the Uyghur and Han populations erupted in Urumqi. Images of the large scale violence were considered so potent that the Chinese government blocked all mention of the riots online and shut down social media networks across the nation. [Self-censoring further discussion of details.]

As a fifteen-year-old with an active Facebook presence, I was astounded that a government could block an entire citizenry from freely accessing information and communicating with each other. From that point on, I immersed myself in learning about Chinese politics, history, culture, domestic and foreign affairs--everything I could to understand how a government that proclaimed it was "serving the people" could justify censorship and media manipulation. My interest in Xinjiang grew further after reading journalist Peter Hessler's Oracle Bones, an account of his experiences in China. The book in part delves into the story of one Uyghur man and explores the racial tensions between Han and Uyghur ethnic groups in China, as well as the frequent accusations that Uyghurs are separatists and terrorists.

After coming across with Uyghur music in one of my many moments of browsing the Wellesley College Music Library, I was even more intrigued by the music and culture of Xinjiang. And so, when it came time to identify the places where I would conduct my Watson project to study local music cultures and their interactions with 'outside' influences, Xinjiang seemed like an obvious choice. Besides folksong and popular music, Uyghur music has a style called muqam, which is a form of ensemble playing heavily influenced by Islamic poetry. Muqam music has regional variations across Central Asia and the Middle East, and so in the spring when I go to Azerbaijan (whose music I have also come across and really enjoyed) I will have the chance to compare and contrast the similarities and differences between muqam styles.

Some music from Xinjiang--


~
As I mentioned, this was my first full week in Urumqi. Considering how much time I have spent in Chinese cities as well as the fact that the Chinese government firmly considers Xinjiang to be part of China, I was pretty surprised at how much culture shock I have experienced. Having come from Hong Kong, which climate-wise and politically speaking is far warmer than Mainland China, it was a drastic change to arrive in the northwest desert oasis of Urumqi, where it snowed a few days ago and military police with tanks and assault rifles stand on nearly every corner downtown. On top of that, I am living in a Uyghur ghetto where ethnic tensions between Han and Uyghurs seem particularly tangible; furthermore, the dominant language is Uyghur and so I am experiencing double language immersion. I've been bewildered by the time change--China has a single timezone for the entire country, so Xinjiang runs on two times, official "Beijing time" and unofficial "Xinjiang time," which is two hours behind. Also, for this first week the water heater kept tripping the electricity and the heating was not on, so I was taking sponge baths every few days and sleeping in the same wool coat I have been trekking around in daily to stay warm. In other words, it has been a lot to take in all at once, but I am slowly finding my way. 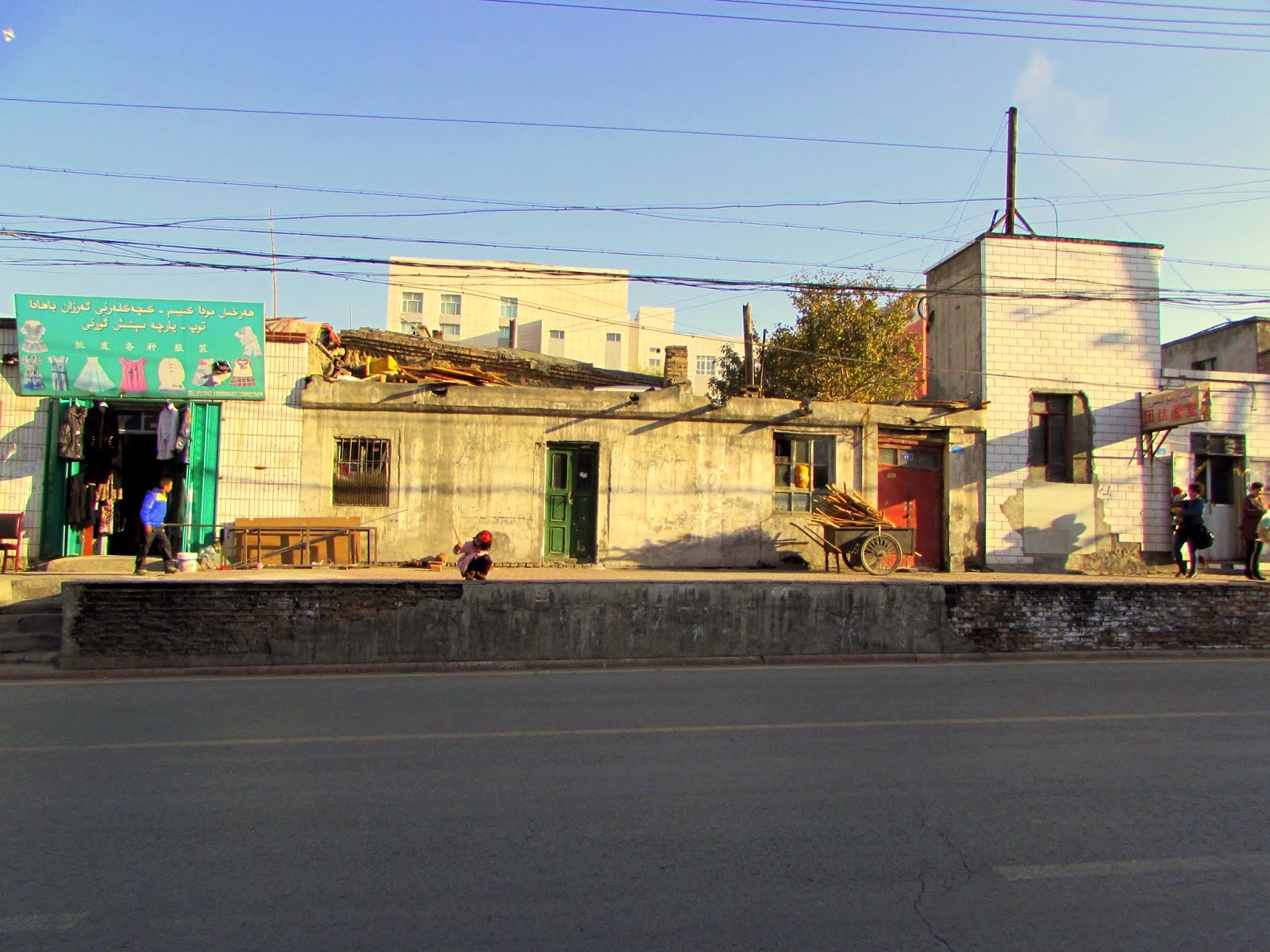 My plan is to enroll as a Mandarin Chinese and Uyghur language student at one of the local universities, and separately study with teachers for erhu and ghijak (a bowed Uyghur music instrument, this time with four strings, that has parallels with violin but is played similarly to an erhu). Earlier this week I walked into the music department of the university and asked the front office about an erhu teacher; a student overheard me and said she could ask around for me. That evening, she said she had found me a teacher: Fan Fan, an erhu performance student who was happy to give me lessons for free because she thought it "would be cool" to teach me. I had my first meeting with Fan Fan, who is extremely cool herself, and offered to pay her or offer some skill in exchange; she said that "I'm getting your friendship and that's enough!" (I may also show her some things on violin, but nonetheless I am getting the better end of this bargain!)

The prospect of learning all of these languages and instruments at once is definitely feeling really daunting at the moment, though, especially since I am in the early stages for nearly all of them. In particular, I went to my first Uyghur class yesterday and tried in vain to make out some of the sound correspondences with the writing system as the class has already met for two weeks and gone through the Arabic alphabet and basic grammar. Basically, I am going to need to teach myself the Arabic writing system before I can even consider the possibility of getting anything out of the class. Since I am only planning on being in Urumqi for about two months, I find myself wondering if there is even any point to trying to learn Uyghur. Still, I think that it is so important to at least make the effort , even if just as a gesture, because in Uyghur culture music and language are so closely tied. In any case, I already have been given a Uyghur name, Pazilet (which I have been told that like "Audrey" means "noble maiden"), so I will at least work on saying, "Hi, my name is Pazilet. Sorry I don't speak Uyghur!"

What could go wrong with those instructions? This weekend, my host here and some of her Uyghur and American friends invited me to go out to a Uyghur nightclub for dancing, an invitation I happily accepted. That evening when we walked in the club, I confronted not a grimy scene of debauchery, but rather a lavish palace with chandeliers, enormous couches, and a large central dance floor overlooked by a main stage on which singers and dancers would come out regularly and serenade the 'clubbers.' There are three types of songs they would play: Uyghur pop, tanza, and disco. Each one comes with its own dancing style--people dance Uyghur dance to Uyghur pop, do a sort of couple's waltz to the slower tanza, and do a sort of enthusiastic middle school dance circle to disco. By American standards, the clubbing was absolutely tame--between songs, there would be a few minutes break so everyone could collect themselves, women wore long-sleeved dresses, and there was absolutely no bumping and grinding on the dance floor. I actually thought it was a huge blast, particularly the Uyghur dancing. The men do a slightly more 'masculine' dance with outstretched arms and some more abrupt shoulder/hand action, while the women complement them, using more slow, delicate, and graceful motions that are almost like poses rather than "dance moves." I copied the motions I saw the women around me doing, and found that the dancing was really fun and intuitive (key: pretend you are a peacock in slow motion). I knew I had hit my stride when one of the Uyghur guys told me I was "naturally perfect" at Uyghur dance. Who knew!?

I can't attest to whether this is popular at the moment, but this Uyghur pop sounds like what we were were bobbing and weaving to on the dance floor--

And to leave you with some images--a new friend I just made who is a former Fulbright scholar who lived in Chengdu for a year and has spent many months in Urumqi took me around this neighborhood that is slowly being demolished to make way for new housing developments. Residents of the old neighborhood are forced to leave and sometimes compensated fairly; in some cases, they refuse to leave their homes and remain for as long as possible (even without electricity or water). These images are from the demolition zone and the nearby area. 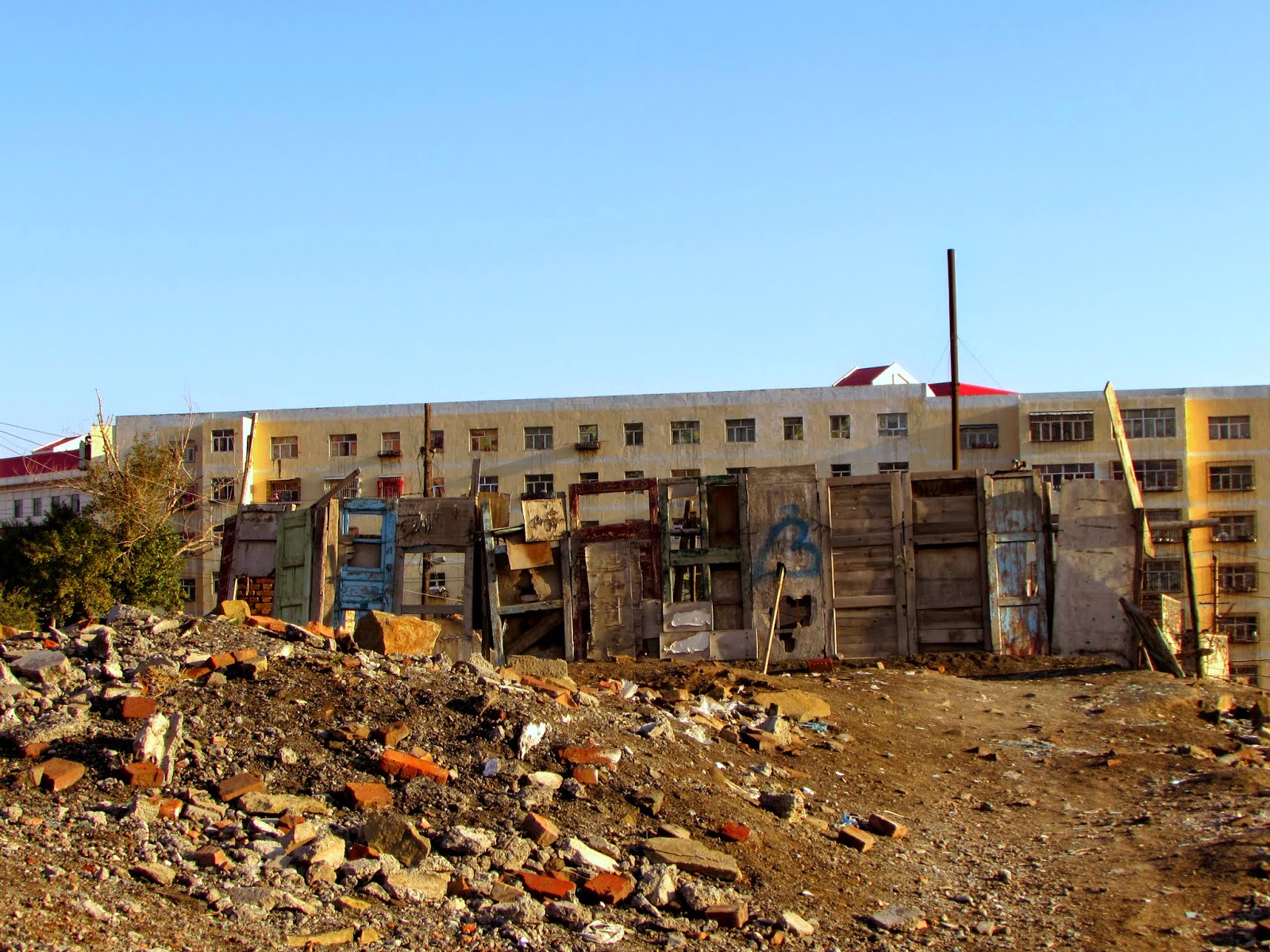 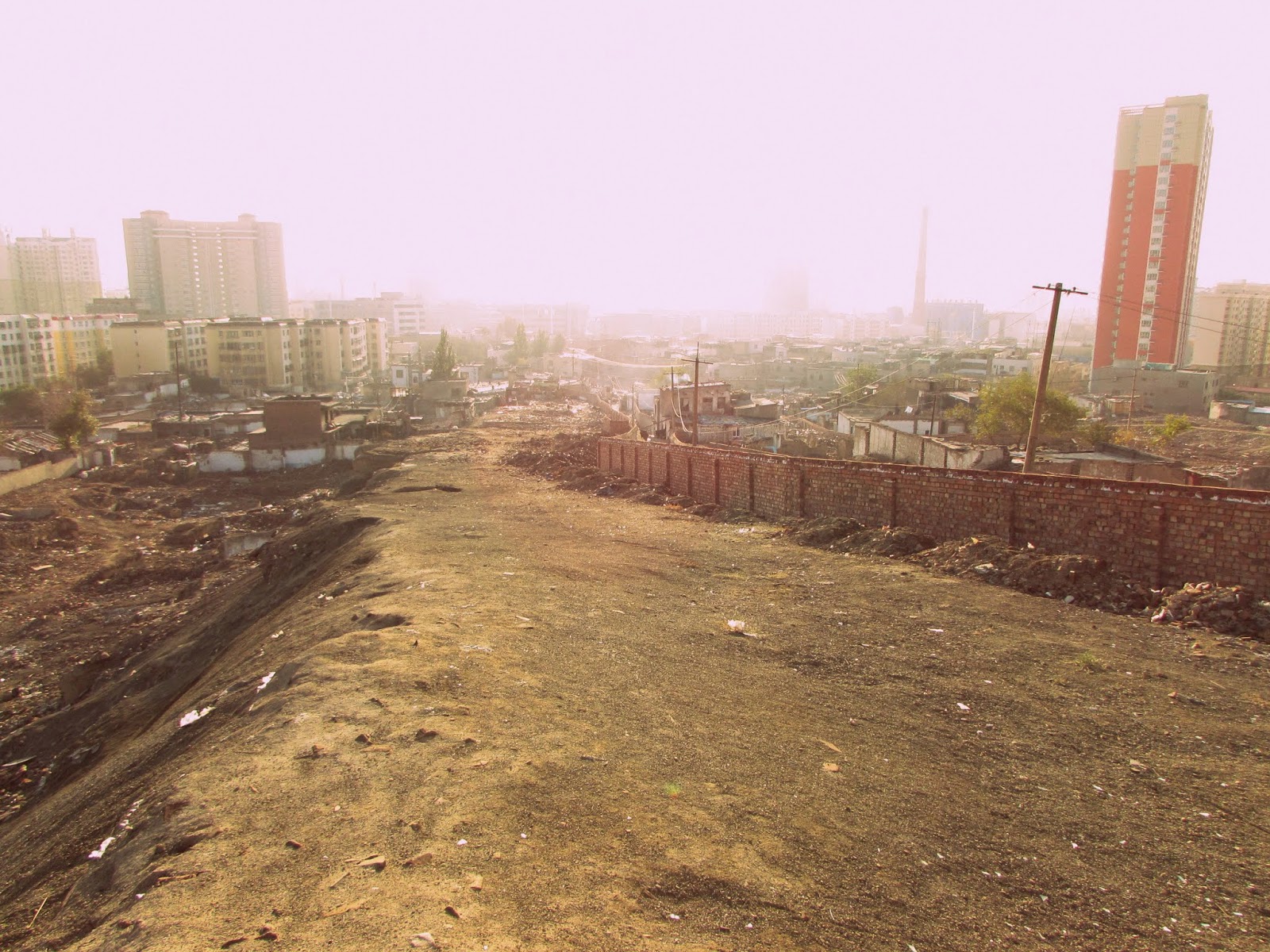 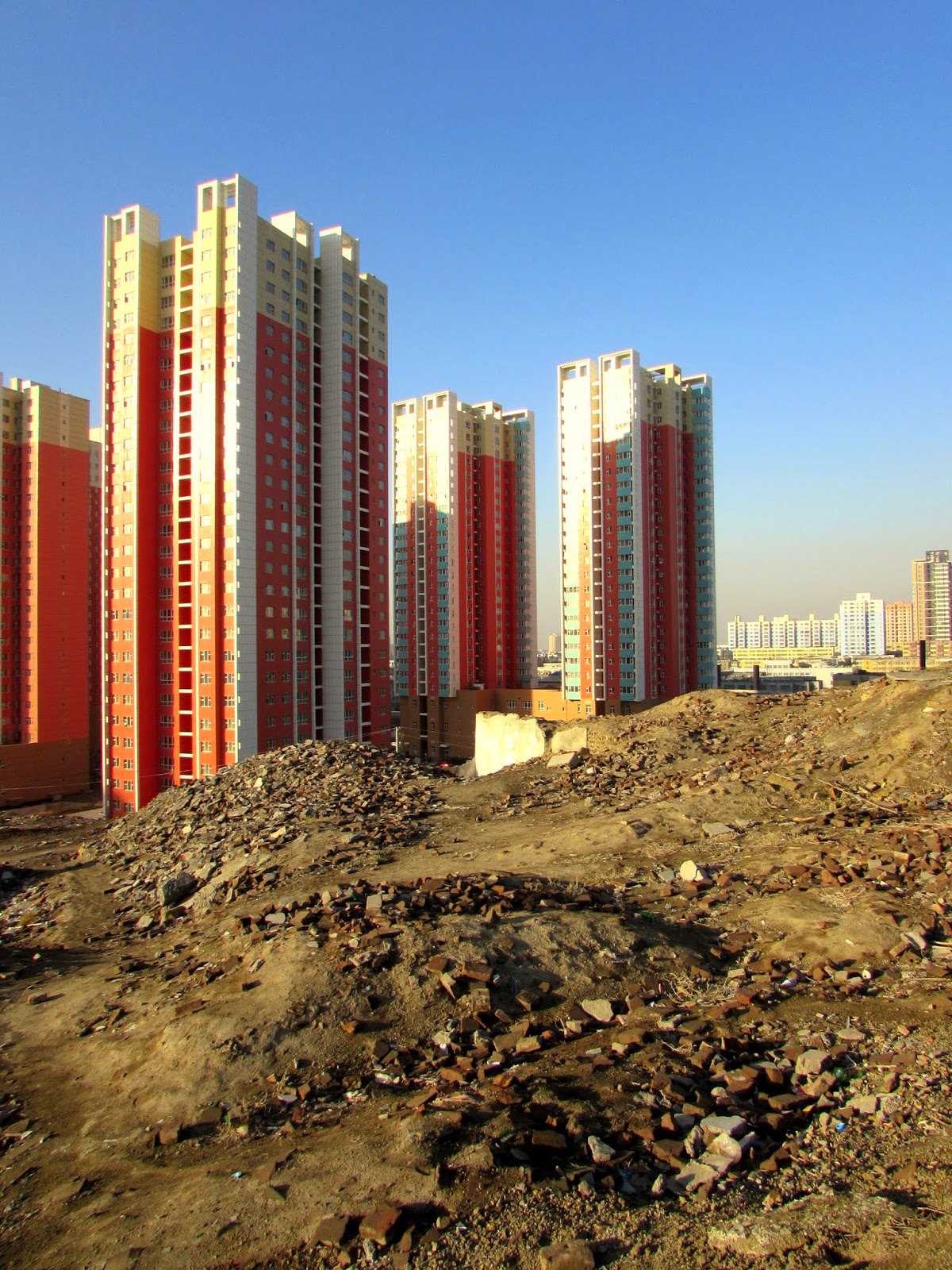 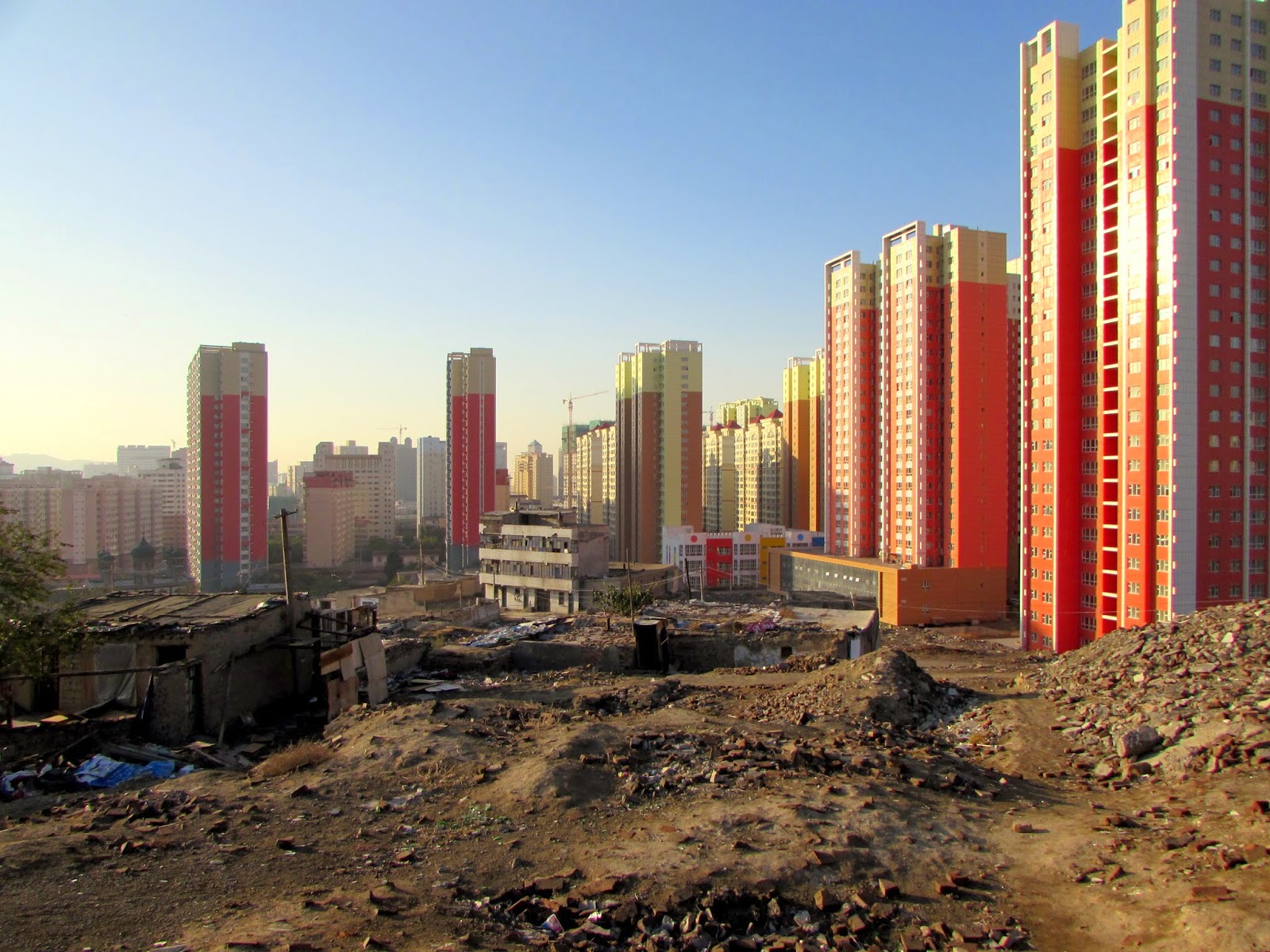 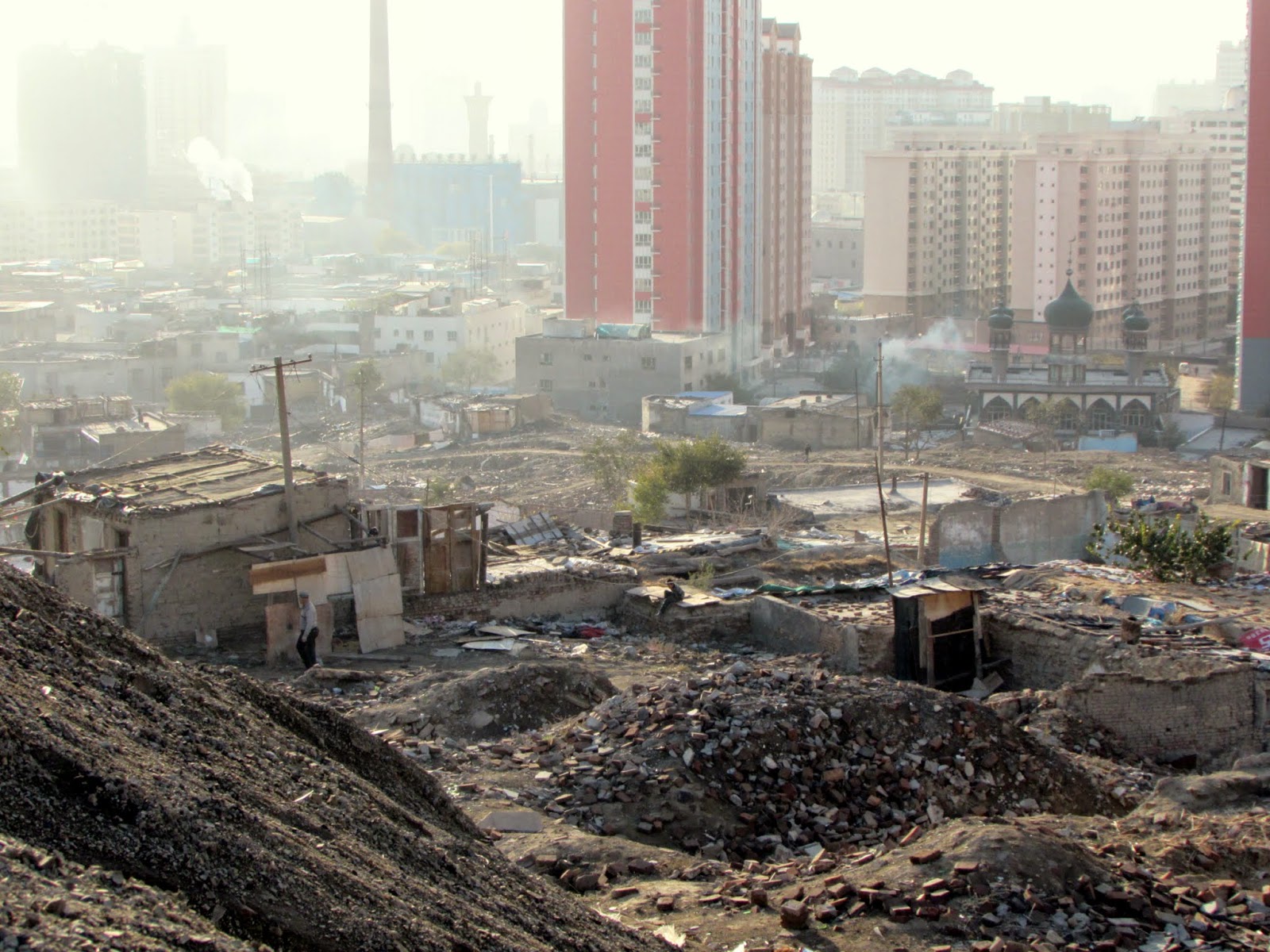 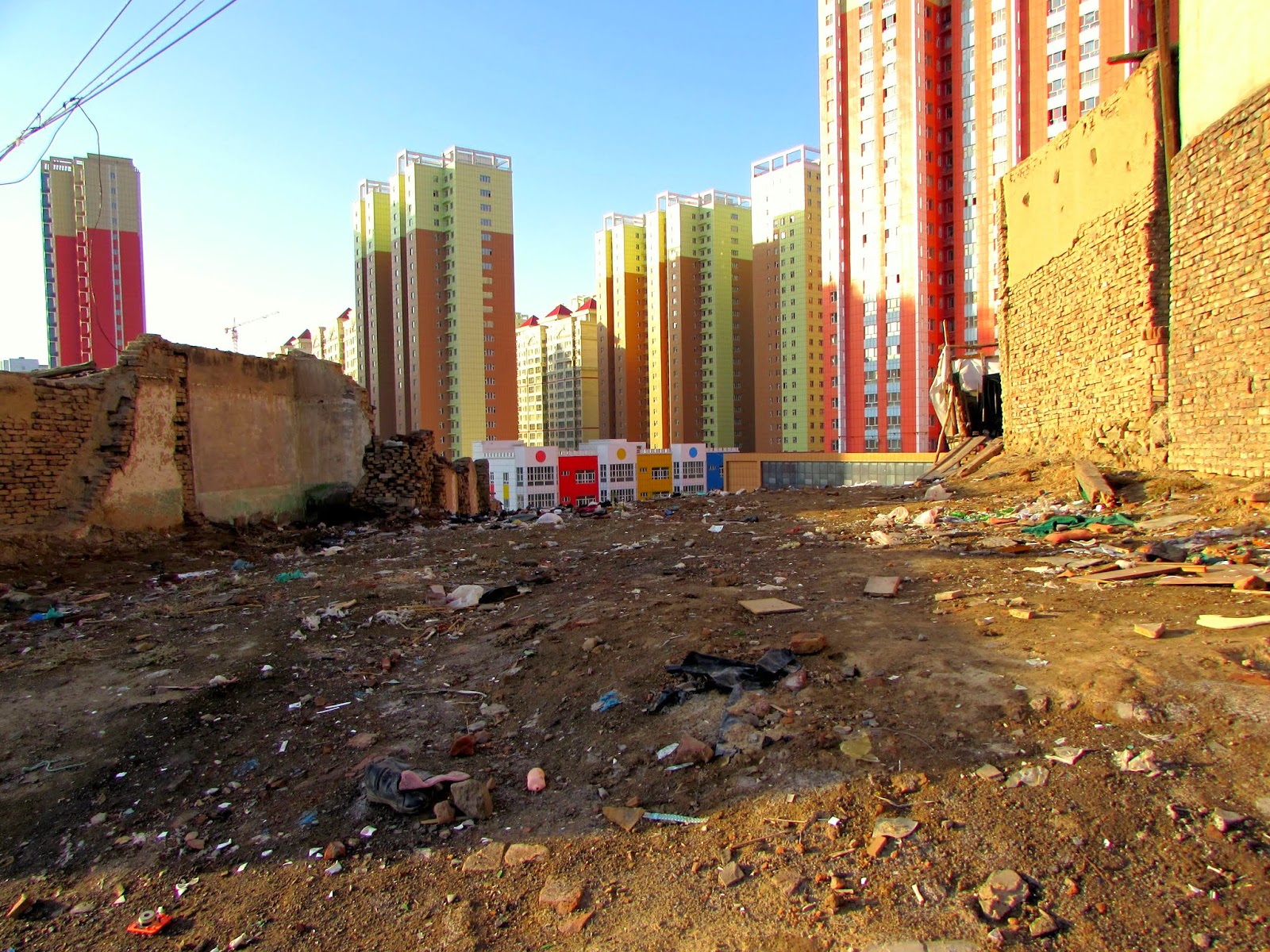 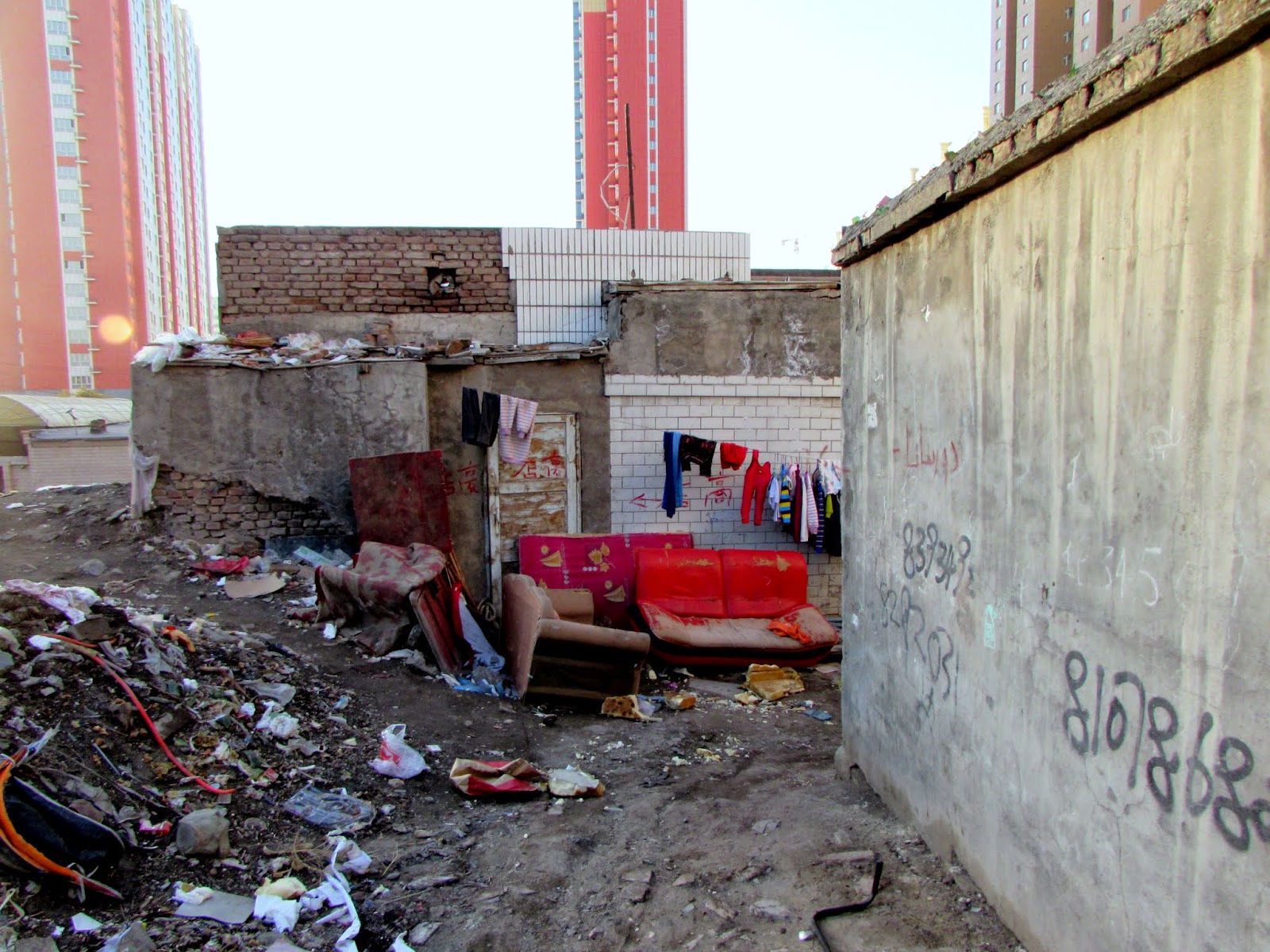 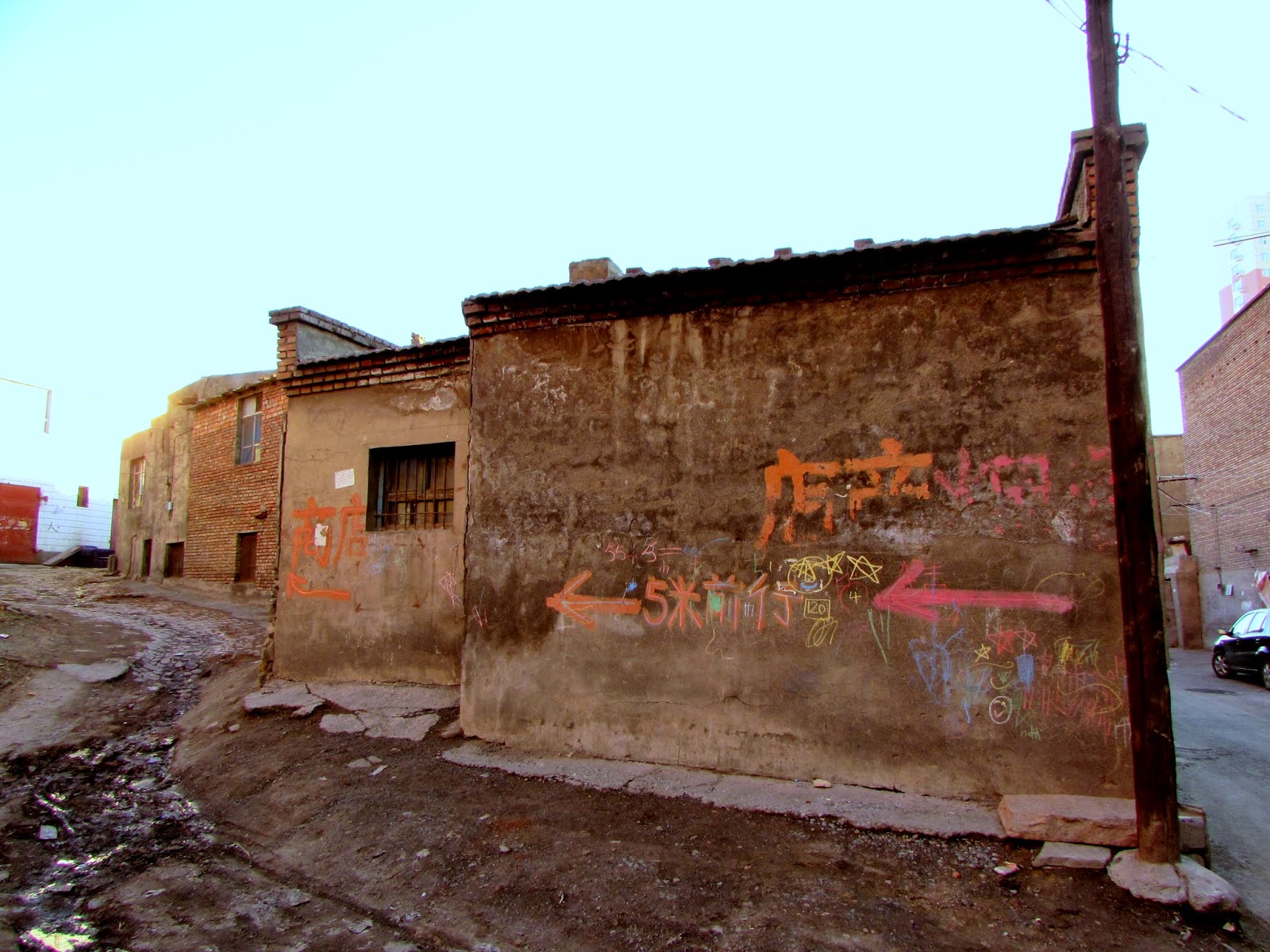 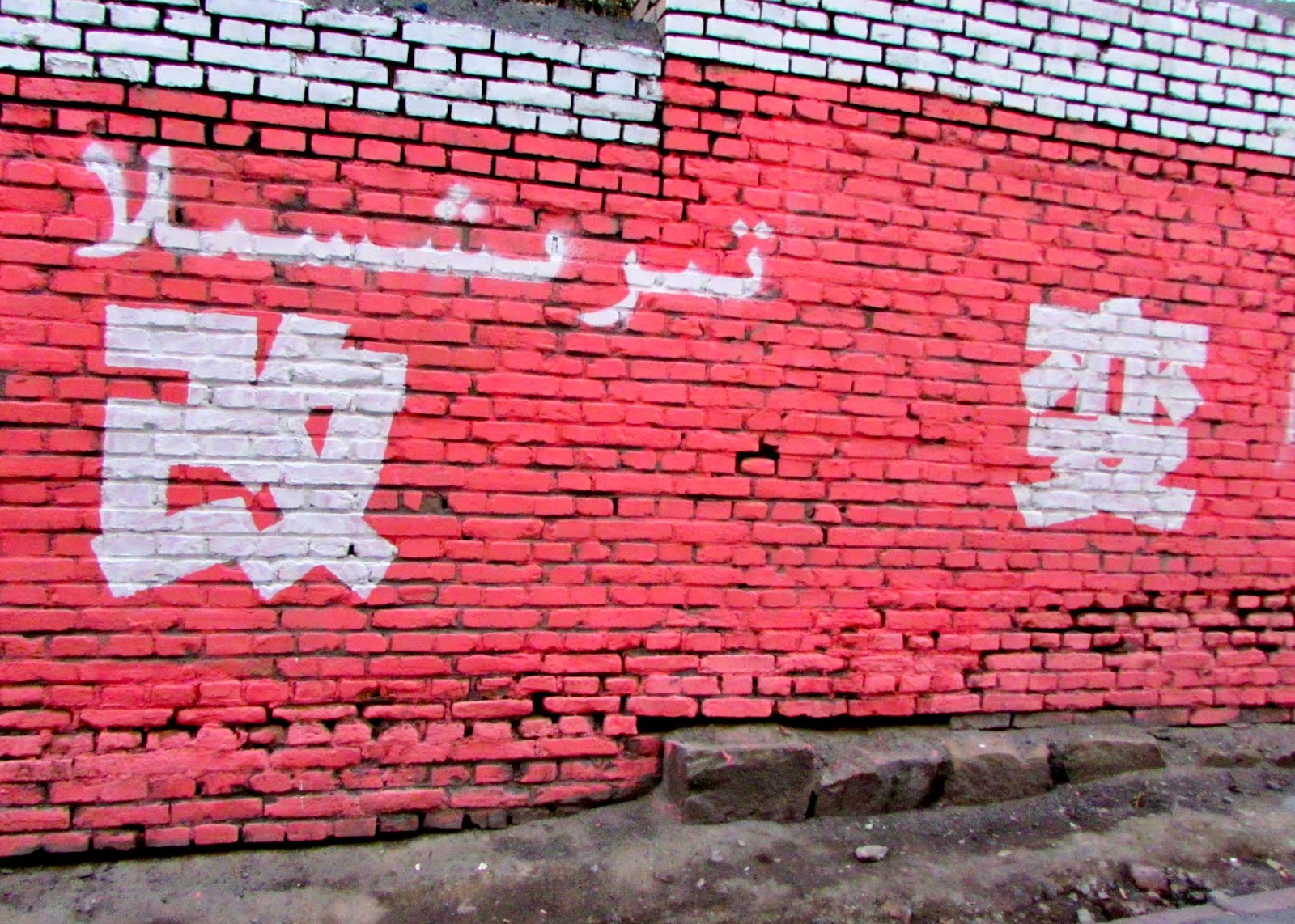