On the Hong Kong protests 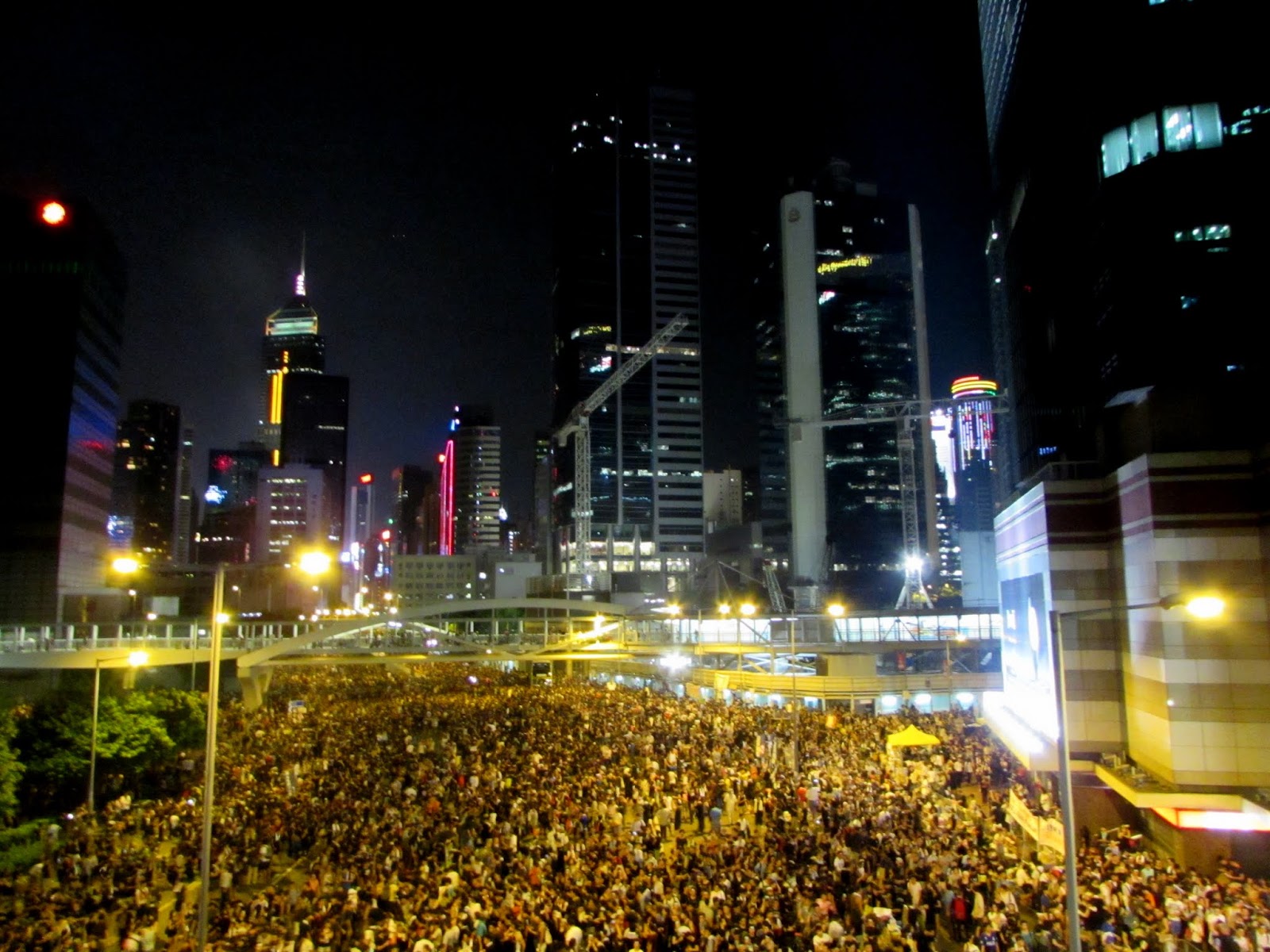 I am long overdue on writing, and as I do so now it is a particularly climactic time, both for myself and for Hong Kong. Much has happened in the last few weeks that I would like to write about, but for the last week, the pro-democracy protests in Hong Kong have occupied my nearly every waking moment as well as mind space. I had heard discussion of the student movement and “Occupy Central” before this week, but as I watched the live stream of peaceful protesters bombarded with tear gas by heavily armed police, I became absorbed in the news and felt the same helplessness and vulnerability that I felt during the week of the Boston bombings. For the past six nights I have gone out to the protests with my former supervisor from ABC News’ Beijing bureau to help with ABC’s coverage of the unfolding events in Hong Kong. I have heard many perspectives—students who are fervent champions of democracy, mainland Chinese who believe Hong Kong citizens are selfish and should stop complaining, apathetic or unsympathetic locals who just want their everyday lives (and ability to use main road arteries) to return to normal…I believe that wanting to nominate and elect one’s own leaders in a free and fair election is not an unreasonable desire, although as someone pointed out to me today, Hong Kong for most of its history has not been democratic (though it has benefitted from having free markets). 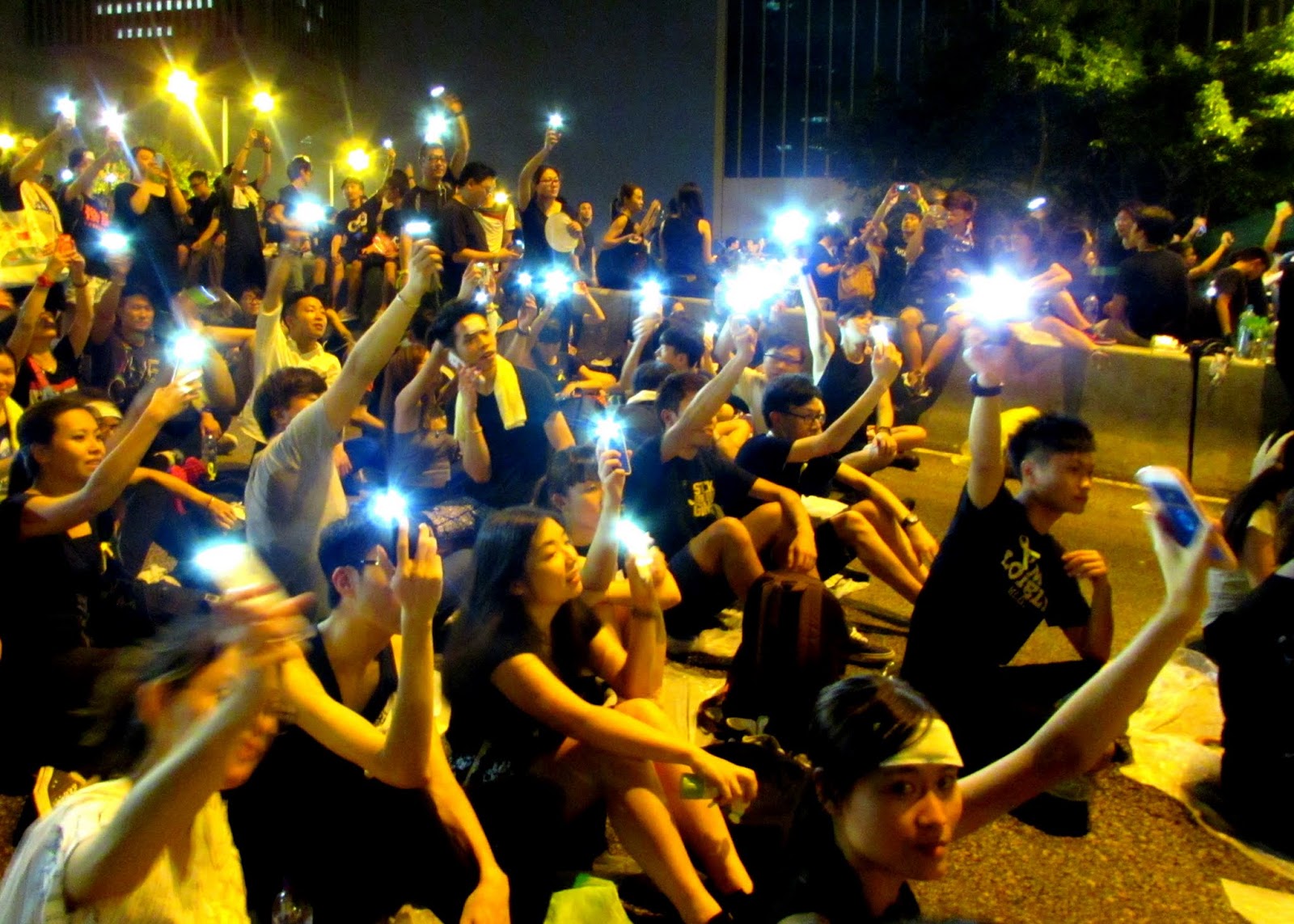 A Hong Kong financier observing the protests told us that the protests are a symptom of the younger generation of Hong Kongers feeling trapped in society—the Hong Kongers don’t have high enough Mandarin language proficiency to work in mainland China, nor high enough English proficiency to work in the States, Canada, Australia, or Europe (and the available visas for these places are dwindling as well). In the meantime, the banking and finance jobs that have powered Hong Kong’s economy are going to mainland Chinese, who are also buying up real estate in Hong Kong and driving housing costs through the roof. In other words, the future the young generation of Hong Kongers face is bleak—even if they find a job in Hong Kong, they are unable to move out of their family homes or face twenty-five years of paying loans to just afford tiny apartments. 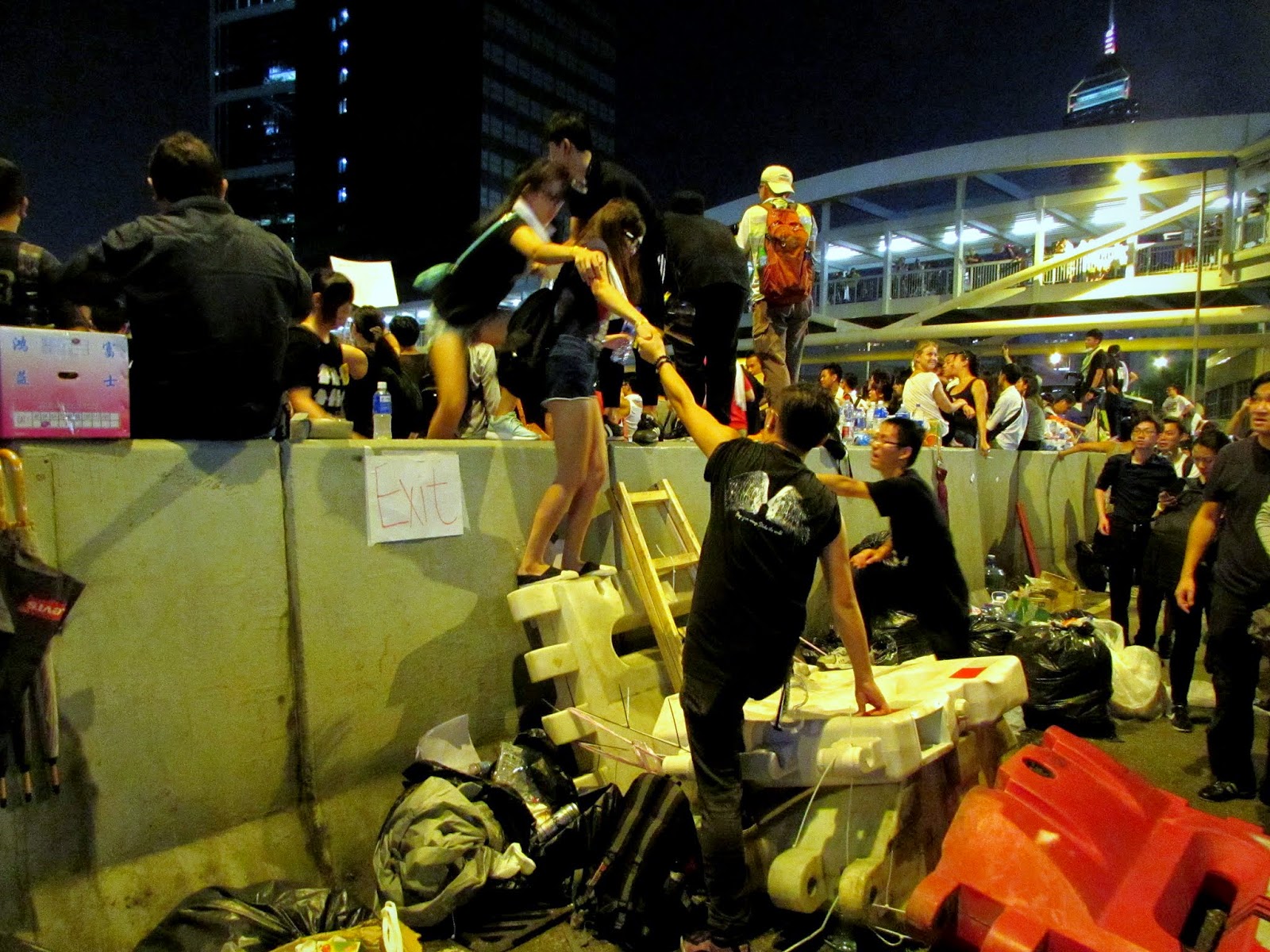 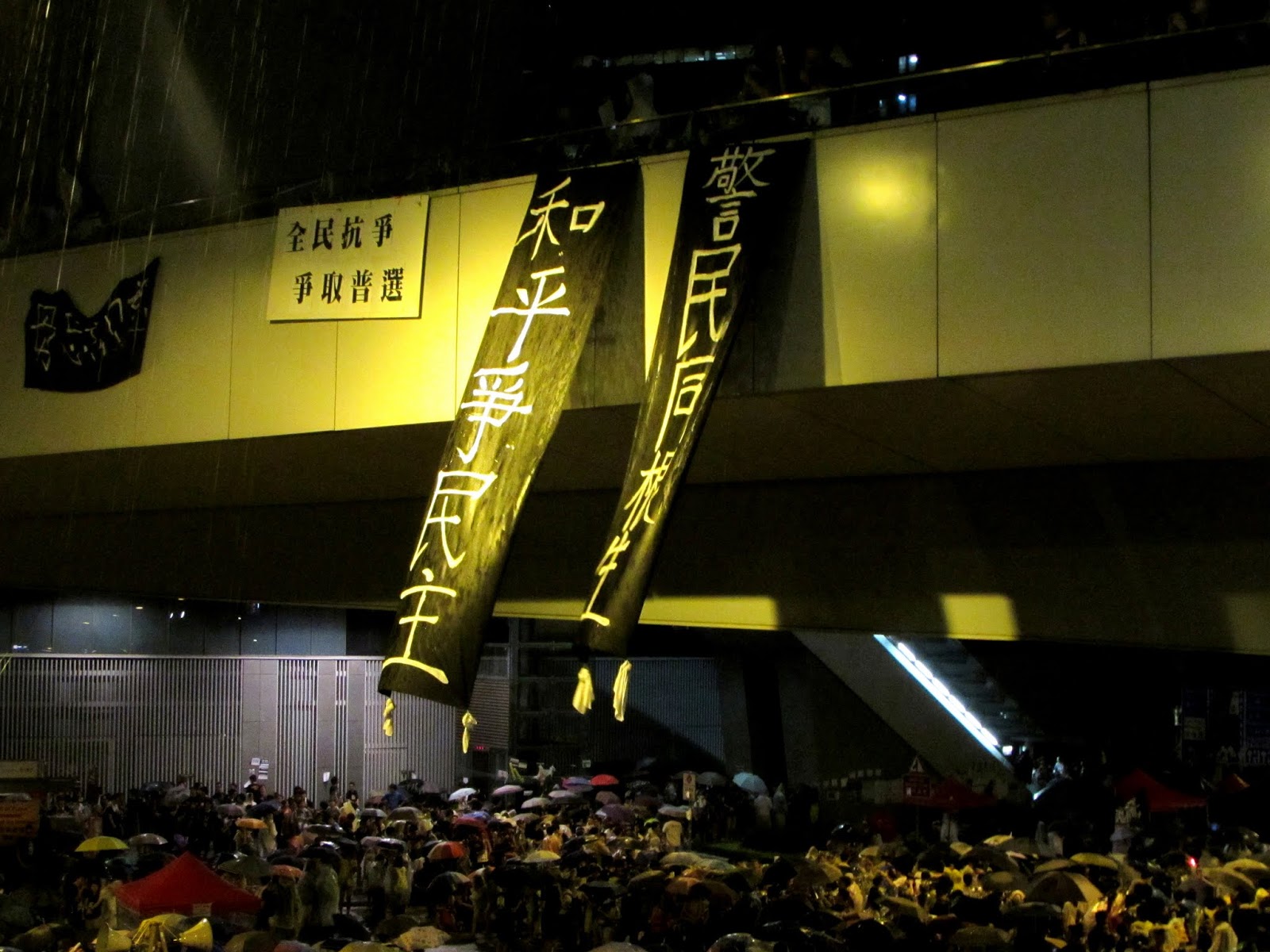 I feel strongly that people have the right to freely disseminate information and express their own views, and the massive censorship and information manipulation in both mainland China and Hong Kong that has accompanied these protests is extremely disturbing to me. Statistics show that online censorship of posts relating to the protests in Hong Kong is at an all-time high in mainland China—far exceeding censorship rates on even sensitive days such as the anniversary of the 1989 Tiananmen Square protests. Instagram has been blocked across mainland China in an effort to prevent images of the cell phone light vigils, the incredible street art, the huge police presence, and of course the tens of thousands gathered, from being seen and potentially emulated across the entire country. I want to hope (or be idealistic, a word that has been used to describe many of the student protesters) that such a public demonstration in Hong Kong, the final frontier of democracy in China, can fundamentally shake the Chinese government at its core and proliferate across China. I also realize how many factors are working against the protesters, not the least of which is the antipathy of much of the population of Hong Kong. Whether they are paid mafia thugs beating up students in Mong Kok or local shopkeepers incensed that their businesses are suffering because of the protests, perhaps an even greater strain on the protesters than the threat of a crackdown from Beijing is the pressure from fellow Hong Kongers to stop disrupting society. Rather than a large showdown between protesters and the People’s Liberation Army, this movement may die at the hands of Hong Kong citizens themselves, urging it out of existence. 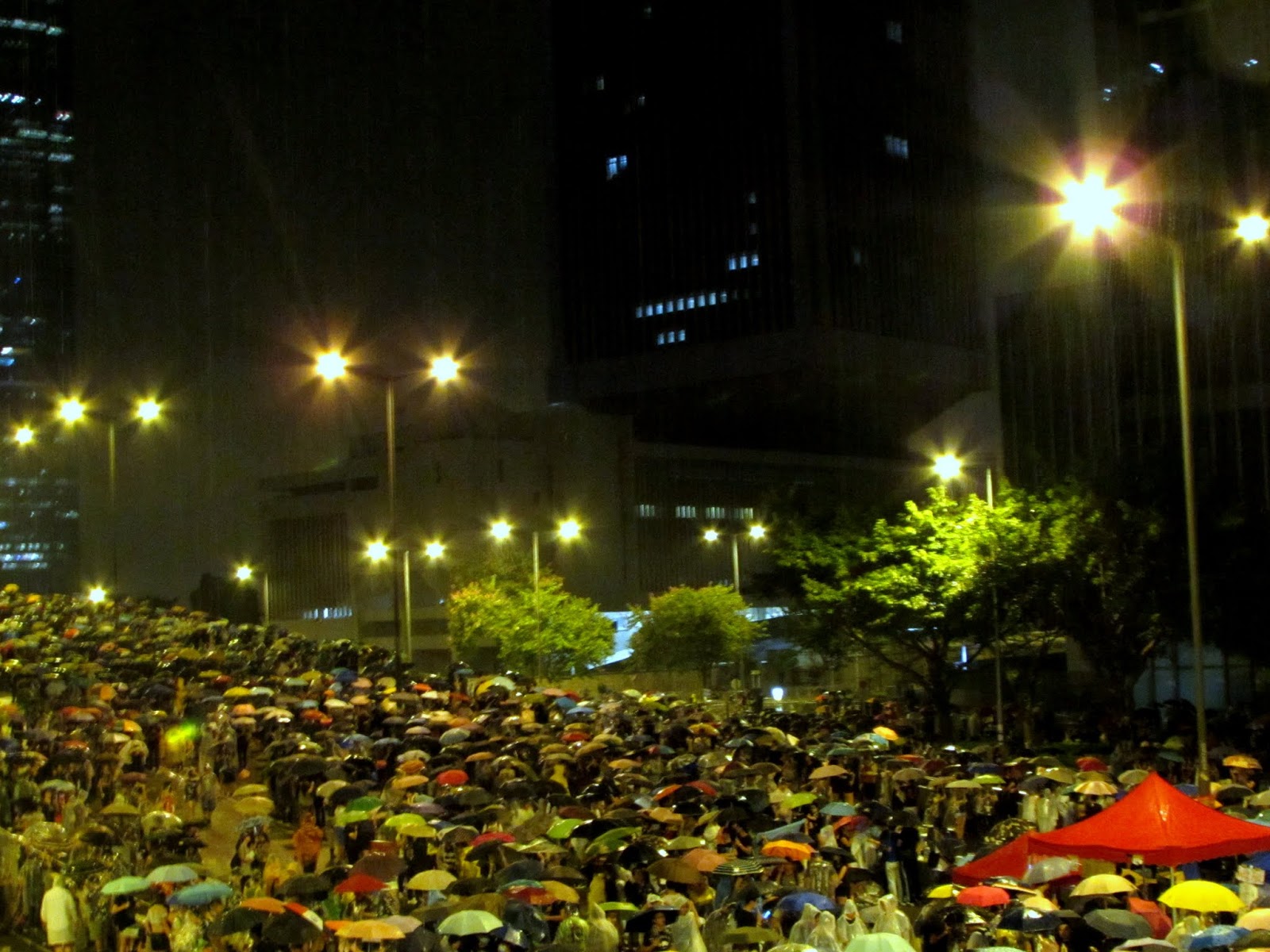 I have tried to remain neutral as I assessed the situation this week; indeed, in the past few days I have both spent time sleeping amidst protesters on the occupied highway and standing among police behind the barricades and cordons. Nonetheless, my natural tendency is to sympathize with the pro-democracy protesters. By many measures American elections, with just two candidates who have achieved their status through corporate lobbying, can hardly be called free. Nonetheless, I find it very difficult to imagine a situation in which I could not feel any concern about the potential implications of infringement on my ability to express myself freely. As it becomes more and more absorbed into the Chinese system, the Hong Kong system is not becoming more independent, and I worry that the entire society will suffer in the long-term as it undergoes the process of assimilation.

I have absolutely fallen in love with Hong Kong. It is hands-down my favorite city I have visited, and I could imagine myself living here in the future. After this week, however, I worry that the future is not bright for Hong Kong, and that this city I have come to love is transforming into a shadow of its former self. 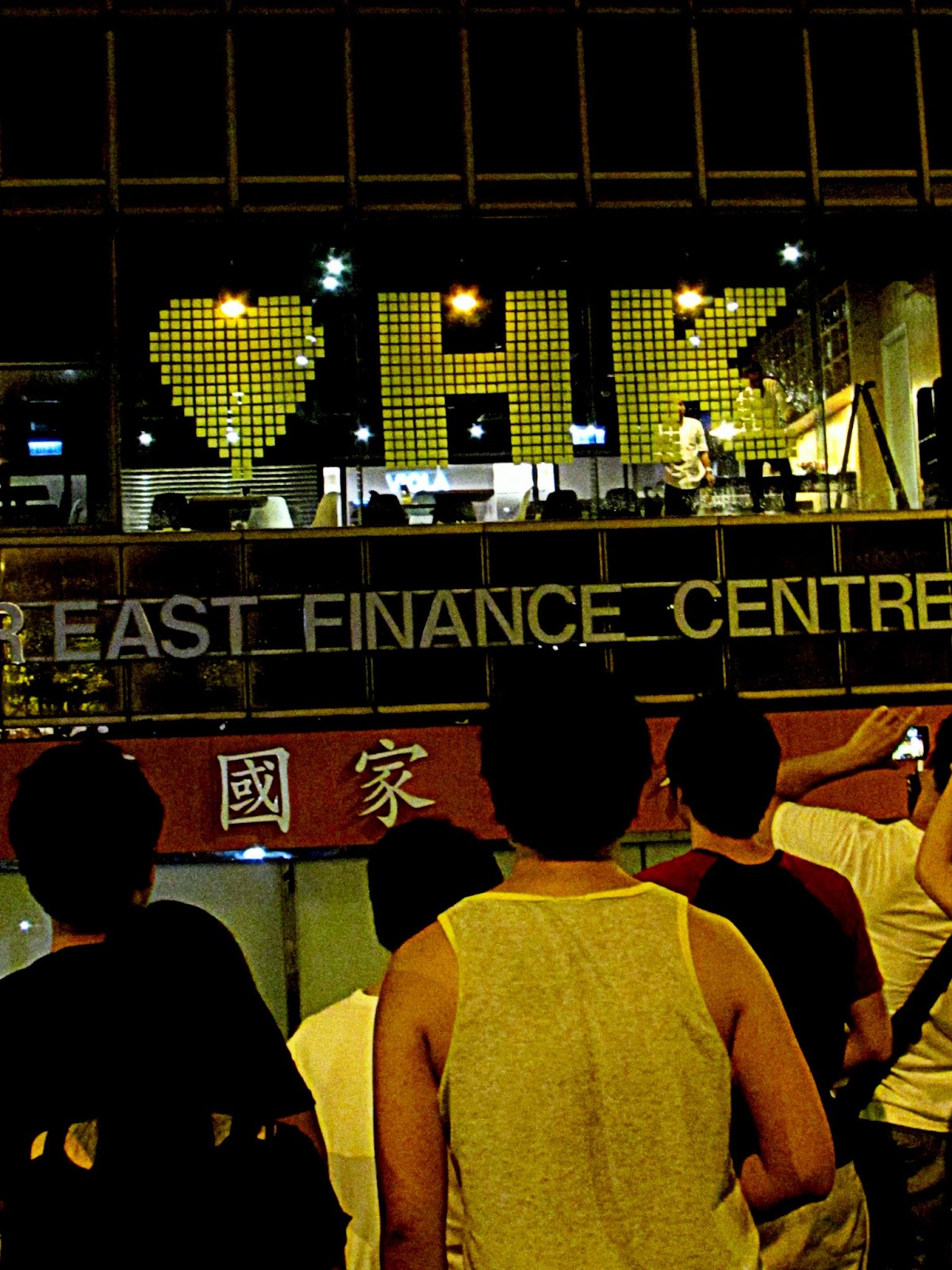 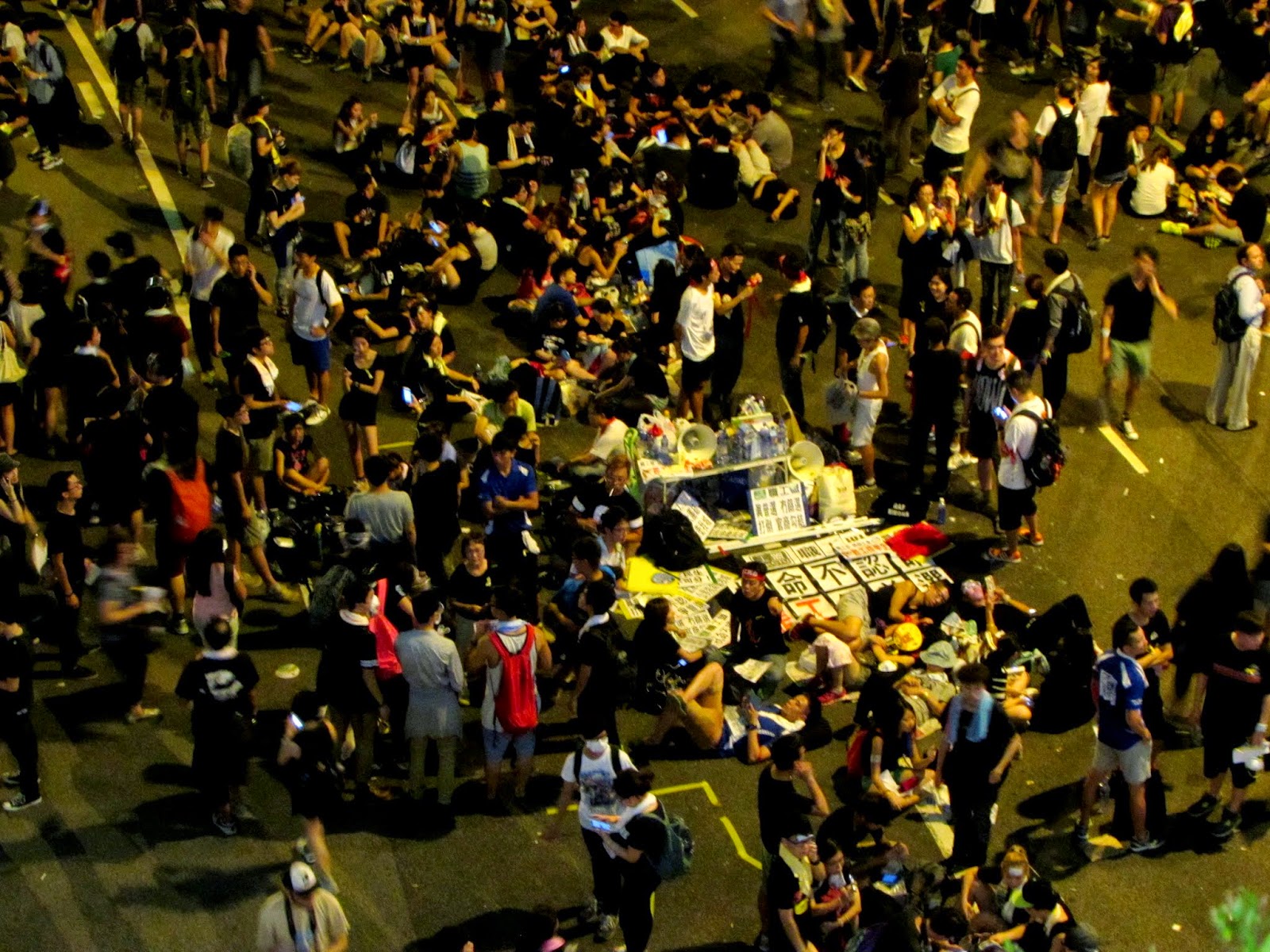 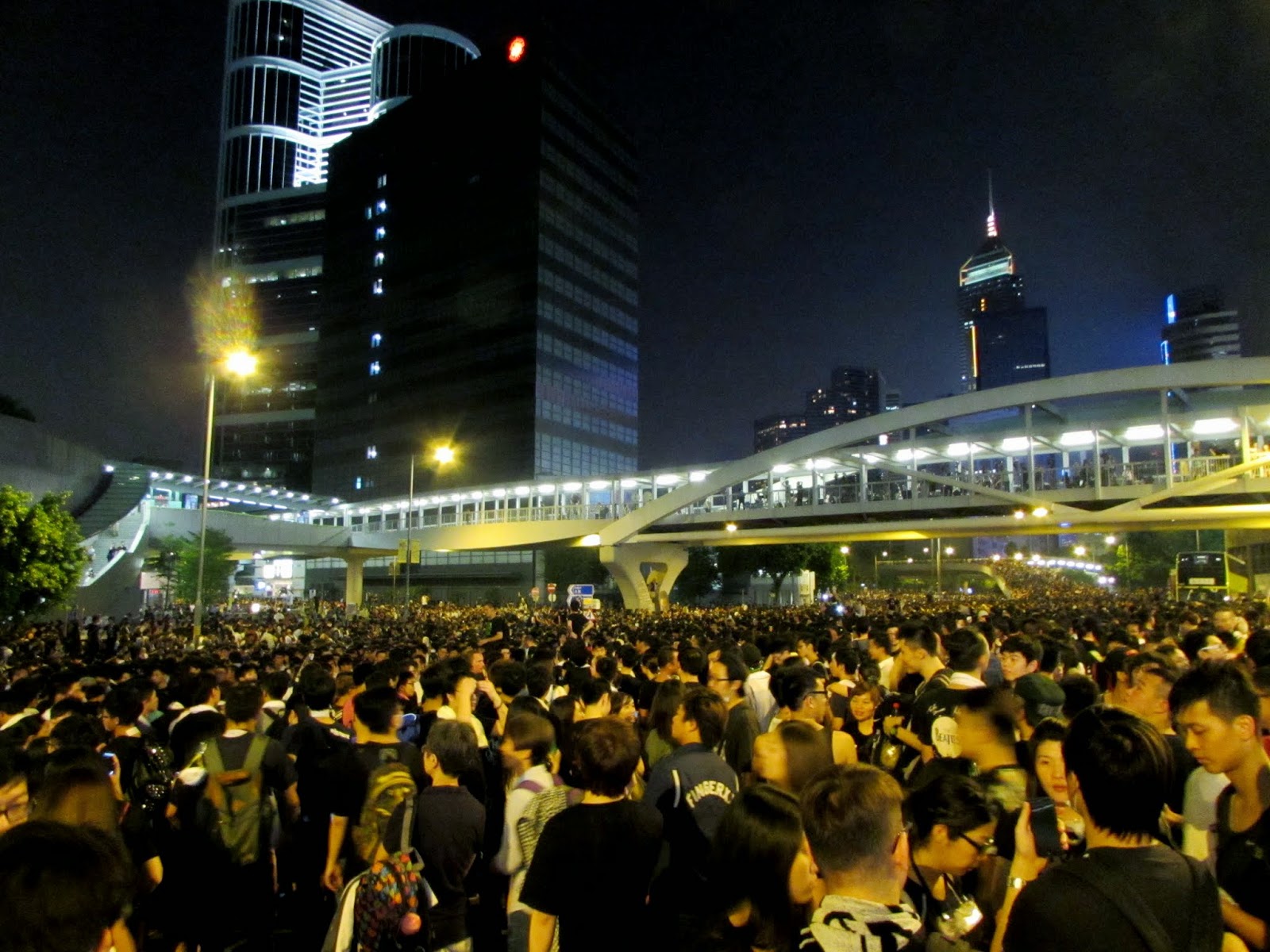 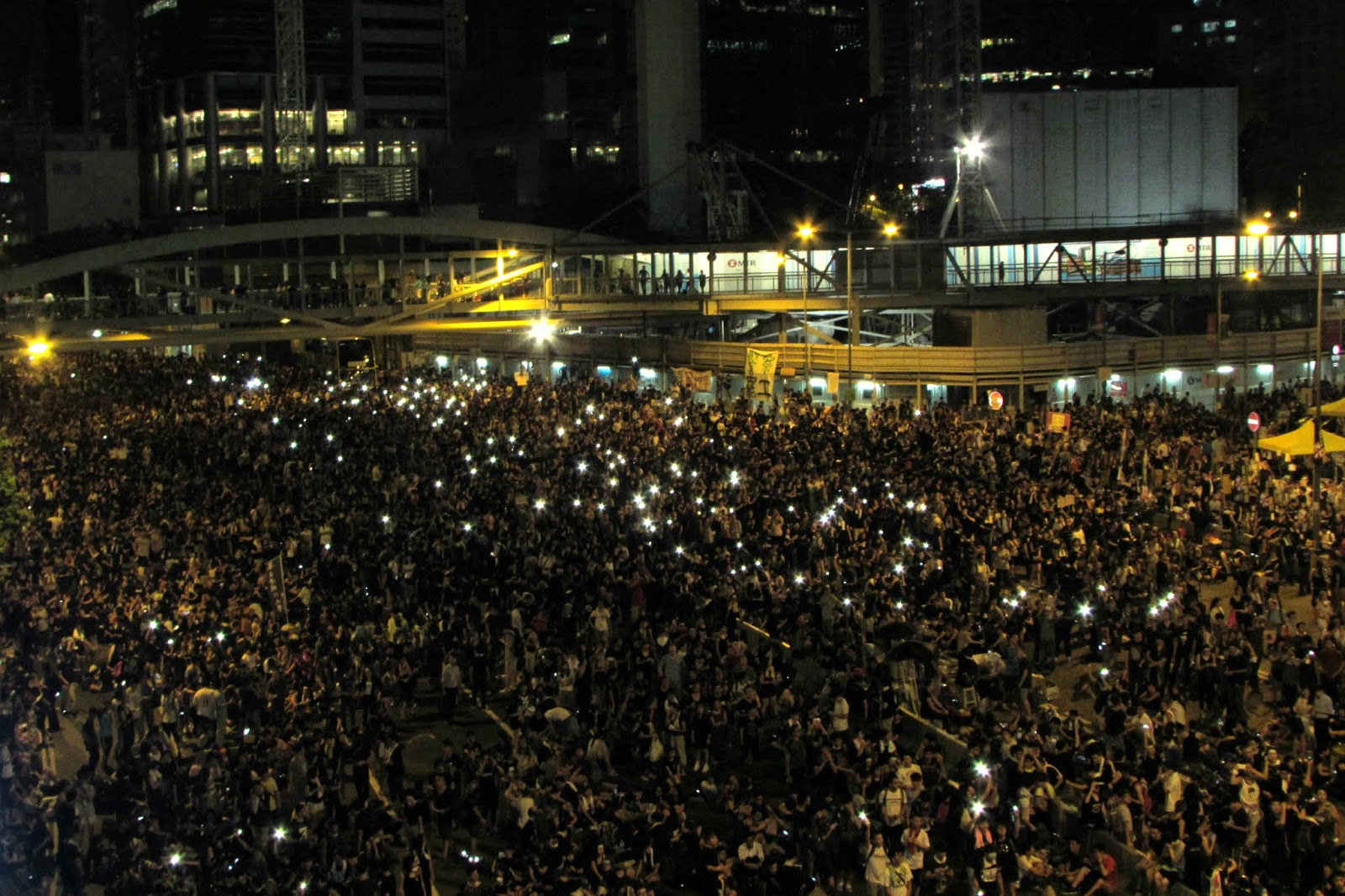 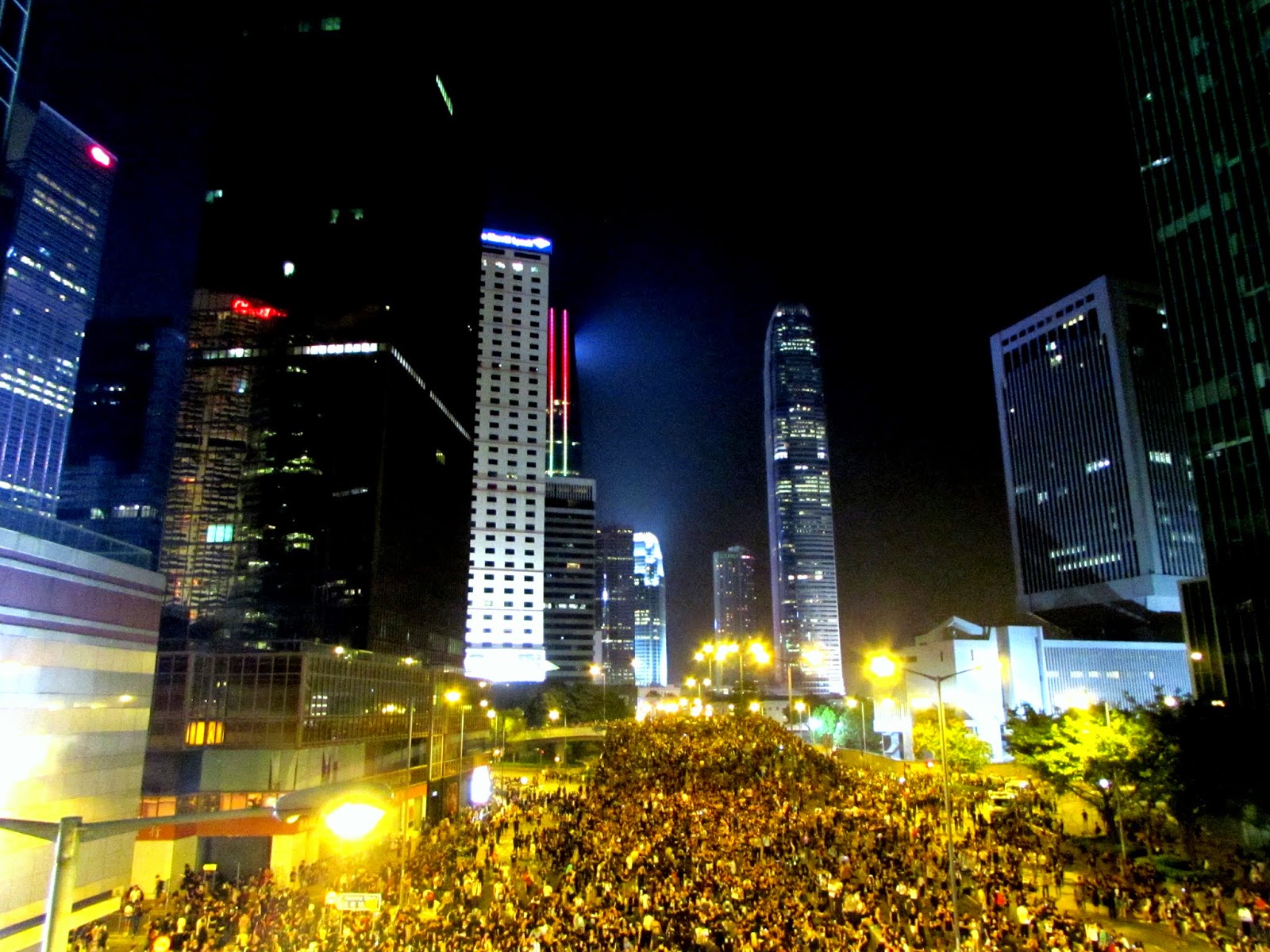 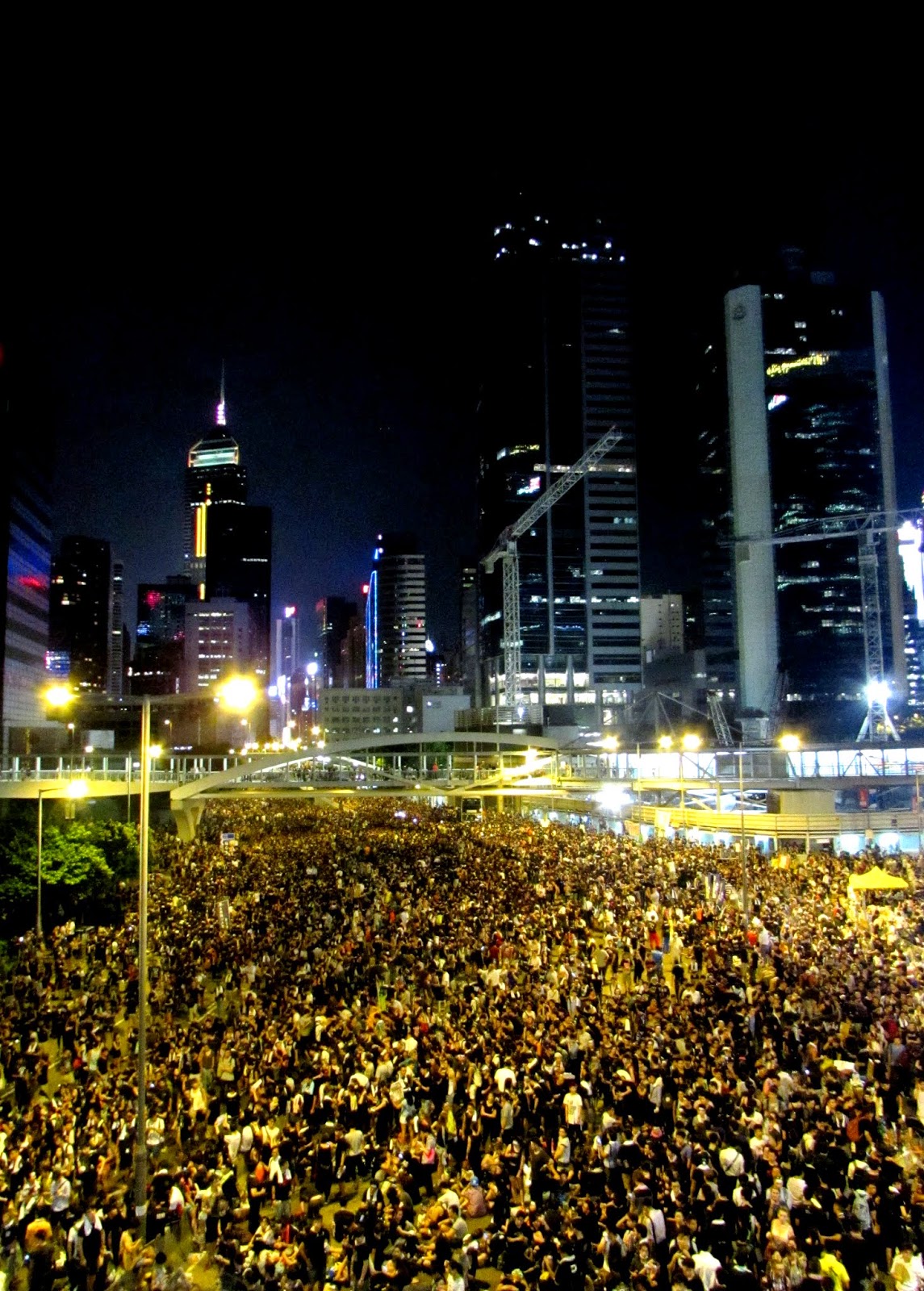 (posted late due to internet accessibility issues--follow-up on my last weeks in Hong Kong, and notes on my current locale, to come soon!)
Posted by Audrey Woźniak at 23:01